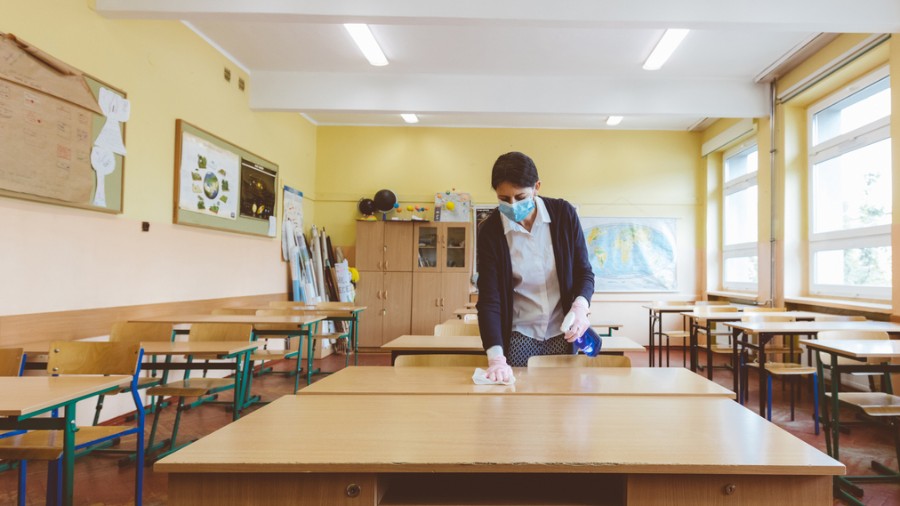 The House Freedom Caucus on Thursday called on President Donald Trump, as well as state and local officials, not to let the coronavirus pandemic prevent the reopening of schools this fall.

“It is more harmful to keep children locked out of schools, and less harmful and less risky for children to go back to schools, and that’s the bottom line. It’s as simple as that,” Rep. Andy Biggs, R-Ariz., said at an outdoor press conference on the Capitol grounds.

Biggs is chairman of the House Freedom Caucus, which comprises about three dozen conservative and libertarian GOP members of the House.

Rep. Morgan Griffith, R-Va., said local school districts should be making their own decisions with respect to reopening.

“It is important that we at least express to the states around the country that we let this be a local decision, and that we follow science,” he said.

“What happens when you don’t go back to school?” Griffith asked, answering his own question:

You have food insecurity. You have emotional problems that are not being addressed. There may be child abuse going on. Nobody is seeing it; nobody’s paying attention. Parents are under a lot of stress. Kids may be left at home. Mom and dad may have to go to work, and then we’re leaving these kids at home.

Dr. Bob Hamilton, a pediatrician from Santa Monica, California, who joined the lawmakers at the press conference, said the coronavirus is not as dangerous to children as once thought, and that they don’t pass the virus to others easily, either.

“Children in general are not getting sick in large numbers from SARS-CoV-2 infection. Children are dying in very, very low numbers — almost zero,” Hamilton said. “Children are not the superspreaders we initially thought them to be.”

He also highlighted the harms that isolation due to quarantining can cause.

“The emotional and physical toll that long-term quarantine is having on our children is not positive,” Hamilton said, adding:

It is very clear that depression, stress, anxiety is increasing in large numbers and especially students in [the] junior high and high school age category.

A press release from the House Freedom Caucus in advance of the press conference shared a similar message.

“Doctors and scientists have shown the minimal risk that COVID-19 poses to children and young adults, and state and local officials are compromising our young people’s development by keeping schools closed over fear of COVID-19,” it said, adding:

Our children should not have to pay for irrational and unprecedented actions to close our schools to in-person instruction.

Rep. Andy Harris, R-Md., who is also a physician, said it’s time to “get the economy going, get children back to school, get their education back on track.”

Speaking at a separate event Thursday, Trump agreed with the House Freedom Caucus. “We have to open our schools. Open our schools. Stop this nonsense,” the president said.

The House Freedom Caucus’ call for the reopening of schools comes as USA Today reported Monday that new cases in the USA had “reached record highs, climbing to about 50,000 a day.”

“Nearly 3 million Americans have contracted the virus, and more than 130,000 have died, according to data from Johns Hopkins University,” the paper reported.