‘Hope is What Sustains Us’: Church Where 26 Slain Presses On 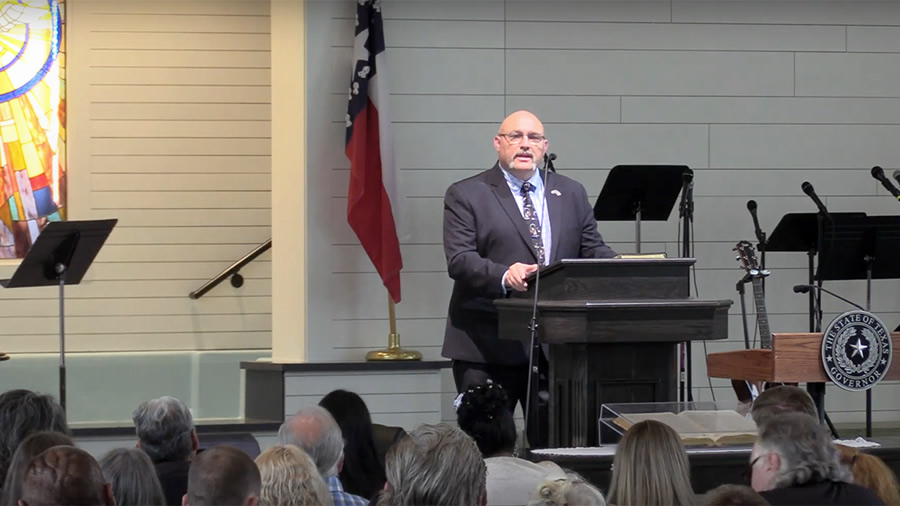 Pastor Frank Pomeroy speaks during the May 19 dedication and memorial service at the new building for First Baptist Church of Sutherland Springs.

In honor and remembrance of those who perished in the Texas church, First Baptist just opened a new building, and the congregation hopes it will serve as a reminder of the lives lost that day.

“Hope is what sustains us and brings us through,” Pastor Frank Pomeroy told The Daily Signal last week in a phone interview, having preached from his new pulpit three times.

A man identified as Devin Kelley entered First Baptist during the Sunday morning service on Nov. 5, 2017, and methodically sprayed bullets into the congregation before driving away and ultimately taking his own life.

Pomeroy, who usually would have been preaching, was out of town that day — taking a gun safety class. He received the news of the shooting, and of his own 14-year-old daughter’s death, over the phone.

Fast forward to Sunday, May 19, about 18 months later, when Pomeroy spoke for the first time from the pulpit of his church’s new building in the town about 35 miles southeast of San Antonio.

The North American Mission Board, the domestic missions agency of the Southern Baptist Convention, paid for and constructed the church building about 50 yards away from the old one. The original building stands only as a memorial, and is not used for services.

In the weeks directly following the shooting, Pomeroy told The Daily Signal, “I was still kind of in a haze and a fog.”

His focus was on caring for his wife Sherri, their surviving five children, ages 21 to 31, and his congregation of about 200.

“I don’t remember a lot, but I do remember talking with the North American Mission Board,” Pomeroy, 52, said in the May 28 interview. “They came to us and said, ‘We want to build you a church.’”

The preacher recalled that he was surprised.

“My words were, ‘We have the money in savings that we were going to build a basketball court, but that’s far from a church.’”

He said Kevin Eizell, president of the Baptist organization, replied: “No, you don’t understand. The churches within the cooperative program have voted and will come together and build you a church.”

Texas Gov. Greg Abbott and Sen. Ted Cruz, via video, were among the guests at the May 19 dedication service, which the pastor said included “four salvations.”

“Both of them almost preached a message,” Pomeroy said of the remarks by Abbott and Cruz.

“Once all the media was gone and everything, I thought that it would kind of drift back a little bit, but still we had a full house and a great service this week with six baptisms.”

One of the beautiful features of the new building, he said, is the bell. It was brought over from the old church and serves as a reminder of the lives lost.

During the dedication and memorial service, the bell was rung 26 times — once for each life lost. The bell tower itself also serves as a memorial.

“We have a picture of all 26, individually hanging on a wall, with their name and a place to sit and just reflect,” the pastor said.

Pomeroy went on to explain that the bell and memorial tower are important to the congregation and wider community because
Sutherland Springs residents don’t want future generations to forget what happened.

“We seem to have a short memory in America now,” the pastor lamented, adding:

This way, hopefully, anyone who goes into that memorial tower with the bell and the pictures hanging on the wall, 30, 40, 50 years from now, will still remember that this beautiful facility wasn’t free. And it wasn’t just somebody going out [and building a new church] with a fundraiser. Lives were lost and tragedy was experienced.

Pomeroy said safety was a top priority in construction of the new building with Texas limestone. Great care was taken, he said, in placement of entrances and exits.

The church is equipped with cameras, and a new first-response team includes medical professionals as well as security.

Pomeroy expressed gratitude for the prayers, kind words, and encouragement for the church community as well as for him personally.

“The No. 1 thing we covet is just people’s prayers, and anything that comes from that later is great, but the prayers are the No. 1 thing.”

The message that First Baptist Church of Sutherland Springs desires to share with others, he said, is that prayer and the spirit of God are what has carried them through so much hurt and pain.

“Hope is what sustains us and brings us through,” Pomeroy said. “That’s what I try to tell everybody, is make sure your hope is not misplaced but placed in the spirit of God before an incident. That way, you have that hope when the incident arrives.”

Lessons From Listening to Spiritual Leaders