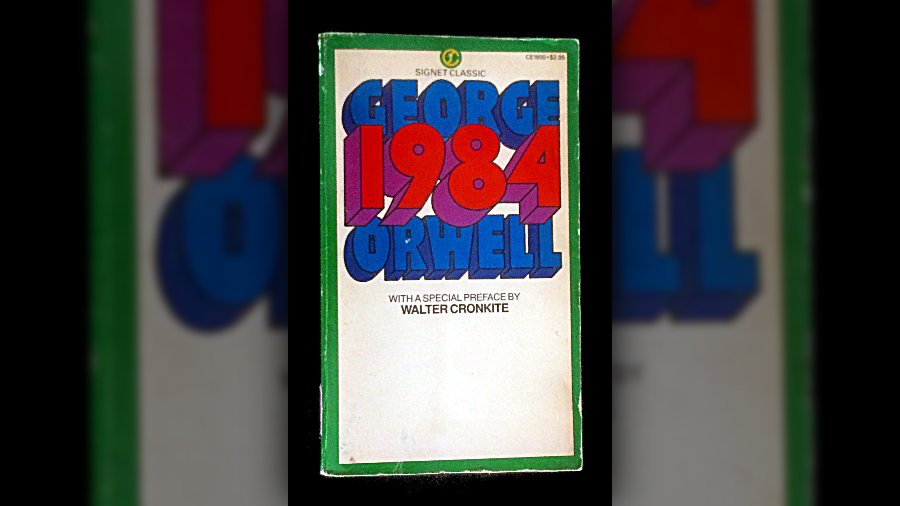 In George Orwell’s book 1984, people speak a constantly evolving language called “Newspeak,” though the completed version is not expected to be the sole means of communication until about 2050. It’s a language that changes to “meet the ideological needs” of the socialist government that controls all.

And this is happening to our own language in 2021.

Reshaping the Language is a Long Process

In Orwell’s story, revised editions of Newspeak come out periodically, each one smaller than the last but still containing “many superfluous words and archaic formations which [are] due to be suppressed later.” Reshaping the language is a long process.

The goal of Newspeak is to make all modes of thought that are incompatible with the principles of English socialism impossible — “so much as thought is dependent on words.” As Orwell wrote:

Its vocabulary was so constructed as to give exact meaning and often very subtle expression to every meaning that a Party member could properly wish to express, while excluding all other meanings and also the possibility of arriving at them by indirect methods. This was done partly by the invention of new words, but chiefly by ELIMINATING UNDESIRABLE WORDS [emphasis mine] and by stripping such words as remained of unorthodox meanings and, so far as possible, of all secondary meanings whatsoever.

Newspeak was designed not to extend but to diminish the range of thought, and this purpose was indirectly assisted by cutting the choice of words down to a minimum.

I would add that even though our thoughts are not totally dependent on words, the communication of complex ideas certainly is. So anyone who is wordlessly thinking/feeling that there is something wrong with the way things are remains essentially “locked in” and can’t communicate this to anyone.

So, congratulations, Dictionary.com. Thanks to your willingness to eliminate problematic words from your lexicon, you win the Newspeak Prize for MOST WORTHLESS DICTIONARY of 2021. You win for your decision to eliminate the word “slave” from the language. Since you are a slave to wokeness, we will never, ever turn to you for any information regarding language. Ever.

As reported by Yahoo! Life: “As part of its ongoing efforts to feature language that is more inclusive and reflective of modern-day society, Dictionary.com will no longer include the word ‘slave’ as a noun identifying a person, instead using the adjective ‘enslaved’ or referencing the institution of slavery.”

You see, a word such as “slave” might make people in certain groups feel bad, so it will be struck from the language. Never mind that a word such as “racist” remains, even though it might be wrongly applied to members of another group and make them feel bad. That’s perfectly fine; because of their “whiteness,” those people deserve to feel bad, anyway. So use the word “racist” all you want, but the word “slave” has been tossed down the memory hole.

Removing words from the dictionary? I think more people are realizing that we have to reject wokeness and end the madness now.

It should be noted that our English dictionary still isn’t shrinking quite as fast as the Newspeak dictionary, simply because new politically correct terminology has to go in. For example, the story about Dictionary.com’s abolition (ha) of the word “slave,” includes the following:

The change is one of 7,600 updates the online resource has announced, which also include the addition of terms relevant to race, social justice and identity, such as ‘BIPOC’ (Black, Indigenous and People of Color) and ‘Critical Race Theory.’ The latest updates — which also include capitalizing ‘Indigenous’ when referring to people, and adding entries for ‘racialization,’ ‘disenfranchisement’ and ‘overpolice’ — follow those announced last September. That round of revisions saw the capitalization of the word Black in reference to people, and the addition of terms relevant to mental health (specifically, suicide and addiction) and LGBTQ identity.

Um, we’d like to point out that the above paragraph is already out of date, as “LGBTQ” has added at least a couple more letters and a “plus” sign, just to make sure every conceivable gender variation is specifically covered.

Also — better sit down, snowflakes — our use of the word “black” to describe a person will not be capitalized, just as the word “white” will not. We have read the rationale for capitalizing “black” and leaving “white” in all-lowercase and do not accept it. “African-American,” on the other hand, will be capitalized, as it refers to a geographical location that is capitalized. “European” will also be capitalized, for the same reason. That is how it will be according to the stylebook here at Huckabee.com, where we make the rules. And if we want to refer to a slave as a slave, we sure as heck will, whether it’s Samson or Miss Jane Pittman. Doing so is being honest, not disrespectful or “dehumanizing,” as if anyone could dehumanize Miss Jane Pittman.

Also, to the people at Dictionary.com: You’re proud of yourselves for this and say you’re ready for the backlash. I hope you think seriously about the reason for the backlash and don’t just dismiss it as (sigh) racism, because it isn’t. A dictionary is supposed to reflect how language is used, not dictate it, at least unless we’re all living in Oceania. Are we?

It’s time to stand up to this.

Even though these are “virtual” ceremonies this year, the school’s events “provide a more intimate setting for students and guests to gather, incorporate meaningful cultural traditions and celebrate the specific contributions and achievements of their communities,” they say.

Here’s another write-up at The College Fix. You’d swear it was from the Babylon Bee.

And as long as we’re talking about standing up, here’s a strong commentary on the lie of systemic racism by Scott Johnston, bestselling author of Campusland.

By the way, the novel Campusland looks supremely entertaining.

It occurs to me that the word “racist” is being thrown around so much, maybe non-racists are finally overcoming their fear of being called one. Or that maybe they’ve figured out the best response isn’t a groveling apology but, “I know you are but what am I?”

Wake-up Call to the Woke

Finally, Bill Maher offered a real wake-up call to the “woke” who are so obsessed with trivia about race and social justice — like a few Dr. Seuss drawings that no one but them even thinks about — that they’ll cause us to lose a very serious competition with China for world domination.

If that happens, “microaggressions” will be the last thing to be concerned about.

Americans are “a silly people,” Maher said during his monologue on Friday, referring to a line about the bickering Saudi tribes in the movie Lawrence of Arabia. China can build a dam, he said, while Americans fight over “what to rename it.” Just for that line, we should name our dam after Bill Maher, if it ever gets built. See the video (strong language warning) here.

As it currently stands, some Americans are proudly “woke,” but as a country we’re going broke, and ever more divided. Removing words from the dictionary? I think more people are realizing that we have to reject wokeness and end the madness now.