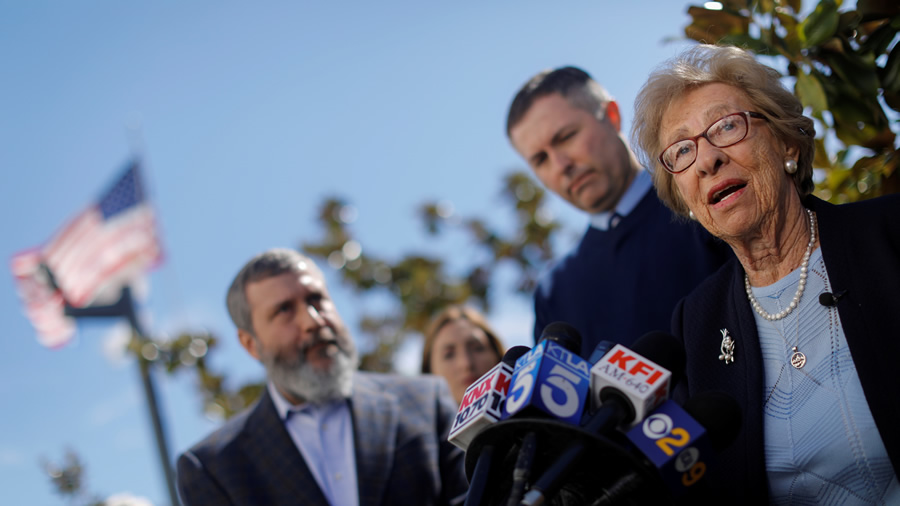 Auschwitz survivor Eva Schloss, stepsister of Holocaust diarist Anne Frank, talks to the media at Newport Harbor High School, March 7, 2019, in Newport Beach, Calif., after speaking with a group of students seen in viral online photos giving Nazi salutes over a swastika made of red cups that sparked outrage.

NEWPORT BEACH, Calif. (Reuters) — An Auschwitz survivor and stepsister of Holocaust diarist Anne Frank met on Thursday with some of the California high school students who posed in social media photos giving Nazi salutes over a swastika made of red cups used in a drinking game.

The anti-Semitic images, one with the caption “master race” — a reference to the Nazi belief in ethnic purity — went viral after being posted to Snapchat on Saturday, fueling concerns about a recent surge in incidents of hate speech in public schools nationwide.

Holocaust survivor and peace activist Eva Schloss, 89, visited privately for more than hour at Newport Harbor High School with about 10 of the teens involved, along with their parents, student leaders, faculty members and a local rabbi who helped organize the meeting.

Speaking to reporters afterward, Schloss said the students “told me it was a joke,” and she was surprised that they professed not to have fully understood the meaning and consequences of their behavior.

“It shows that education is really, really very inadequate,” she said, adding that the students and their parents, nevertheless, were sincerely apologetic.

“I was 16 when I came out of Auschwitz,” Schloss said she told the students. “I was their age when I realized my whole life was shattered.”

The photos were taken at a party at a home in Costa Mesa attended by students from several high schools serving a cluster of predominantly white, largely affluent Orange County communities. School officials said they have interviewed more than two dozen students and are weighing disciplinary action.

The images included students with arms raised in a Nazi salute and about a dozen students crowded around the cups arranged in the shape of a swastika, according to multiple media accounts.

Schloss, who resides in London, was in California on a U.S. speaking tour when Jewish leaders in the Newport Beach area asked her to come and meet the students there.

The early life of Schloss, a native Austrian, closely parallels that of her German-born stepsister, Anne Frank. Both families moved to Amsterdam to escape anti-Jewish Nazi persecution in their homelands.

The two girls lived near each other and were friends before Germany’s Dutch occupation, forcing both families into hiding. Frank’s personal journal about her family’s ordeal was posthumously published in 1947 as “The Diary of a Young Girl.”

Frank died at age 15 at the Bergen-Belsen concentration camp in Germany in early 1945.

Like Frank’s family, Schloss was captured by the Nazis in 1944 in Amsterdam and was sent to Auschwitz, where her brother and father died. Schloss and her mother were liberated by the Soviet army, and her mother married Frank’s father, Otto, in 1953.

Rabbi Reuven Mintz, director of the Chabad Center for Jewish Life in Newport Beach and an organizer of the students’ meeting with Schloss, said the controversy should be a “wake-up call” to a rising tide of anti-Semitism and other forms of intolerance.

The Anti-Defamation League, which tracks acts of racism, reported that the number of anti-Semitic incidents reported at public schools across the United States jumped 94 percent from 2016 to 2017, the latest year such figures are available.