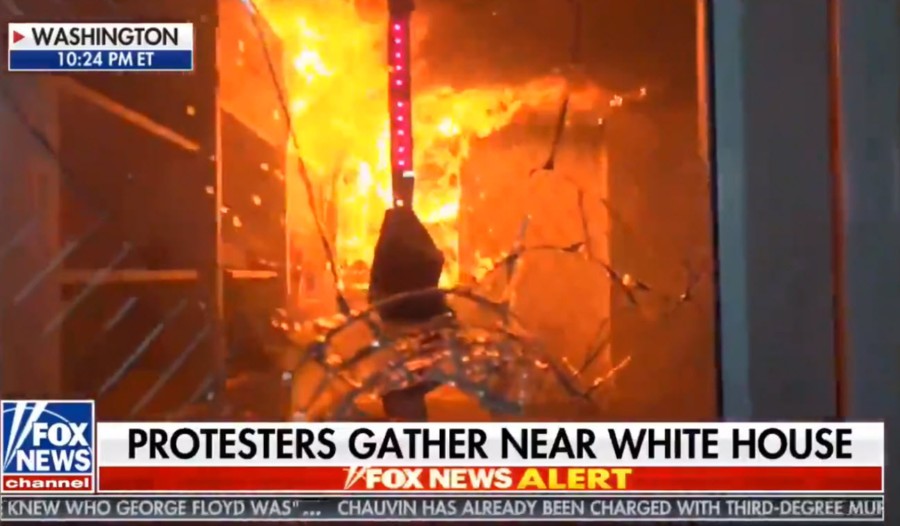 Another night of violent chaos engulfed the country as historic St. John’s Episcopal Church was set ablaze Sunday night, one of several fires set near the White House.

Demonstrations across the country turned violent yet again as activists set cars ablaze in Washington, D.C. and looted businesses across the country in protest of the death of George Floyd, a black man who died after a Minneapolis, Minnesota police officer knelt on his neck for several minutes, according to video of the incident.

St. John’s church in Lafayette Square is burning right now. Every single president since James Madison has sat in that church. It’s a historic landmark and it’s on fire.

NEW: Fire was in basement of St. Johns, and is out, my @washingtonpost colleague @phscoop reports from DC fire department. Firefighters got there w/ a police escort and quickly put out the blaze. Did NOT appear to cause any significant damage, and it is unclear how it started.

The St. John’s fire was extinguished without major structural damage. The historic church found a better fate than many other buildings targeted in the nationwide riots.

Protesters in Minneapolis dragged a truck driver out of his vehicle after he drove into a throng of people clogging a highway. The driver did not appear to hit any of the protesters with his truck before he was pulled from the vehicle. He sustained injuries, media reports show.

I was just sent this on the ground view of the truck that drove into a crowd of protesters on 35W in Minneapolis: pic.twitter.com/I5Pl0NkSix

Some protesters were prepared to take on instigators who vandalized property and caused violence. Video out of DC showed protesters apprehending a man who is seen smashing up pavement. The protesters then handed him over to police, video shows.

Peaceful protesters in DC tackle an Antifa rioter and hand him over to the police for trying to turn things violent. He was smashing the pavement so people could have objects to throw at the police. pic.twitter.com/WoNIkH0GM8

Fire started at AFL-CIO building not far from WH. pic.twitter.com/tRpP1sc3UO

BuzzFeed reporter Brianna Sacks reported Sunday afternoon that one woman in Santa Monica, California pleaded with looters not to smash and grab private property, telling them: “We don’t want Trump re-elected, please don’t do this.” Sacks reported that most of the businesses on 4th street in Santa Monica were looted.

And in the most Santa Monica thing ever, a shirtless dude on his run down the street toward the beach as SWAT teams show up and workers board up Nordstrom pic.twitter.com/SsTS1HJVUK

A black woman lashed out at a white woman dressed in black for marking a Starbucks Coffee with the Black Lives Mask symbol. “They’re going to blame black people for this, and black people didn’t do it,” she said to the white woman.

This is a developing story that will continue to be updated.