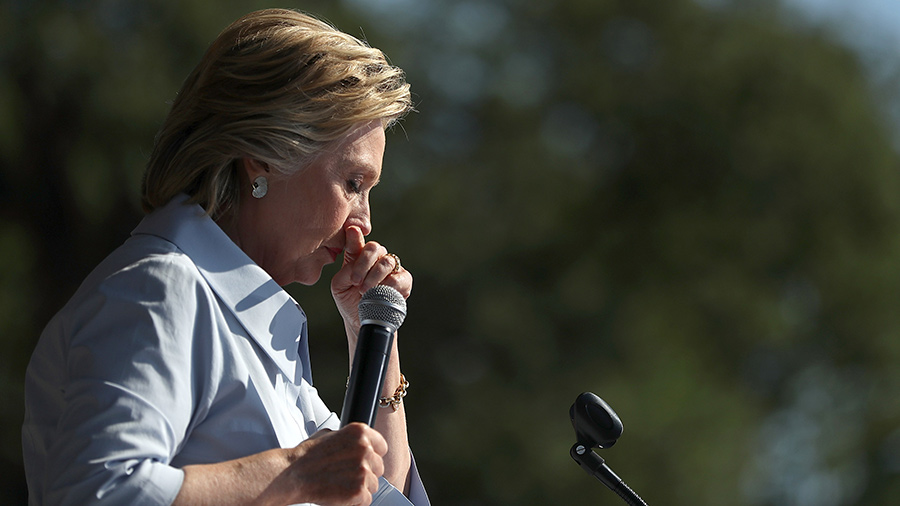 Democratic presidential nominee former Secretary of State Hillary Clinton pauses as she speaks during a campaign rally at Luke Easter Park on September 5, 2016 in Cleveland, Ohio.

Her new revised tax plan would raise the estate tax to as high as 65 percent — up from 40 percent, where it is today. She would also apply this hated death tax to as many as twice as many estates.

It’s one of her dumbest ideas yet — and that is saying a lot. It won’t raise any revenue to speak of. It’s a bow-tied gift to estate-tax lawyers and accountants. Many studies have found that the cost to the economy of taxing a lifetime of savings more than outweighs any benefits. It actually could end up costing the Treasury money by reducing investment in family businesses, which are a major engine of growth for our economy.

What Clinton doesn’t get is this: Anyone who’s smart enough to make half a billion dollars is smart enough to find a way to dodge this confiscatory tax. That’s the whole history of the death tax: The very rich never pay it.

So why this act of desperation from Clinton? The answer is fairly obvious. She’s sinking in the polls. She’s terrified of losing the Bernie Sanders voters by not being tough enough on the superrich. So she’s adopted the Sanders tax policy. Sanders has said there’s nothing wrong with taking more and more money from people in the top 0.3 percent of incomes.

Clinton: Is a 70 or 80 percent income tax next? This might win over even more Sanders supporters.

I’m not going to explain again the economic argument against the death tax. I’m going to make an ethical and moral argument. Who in her right mind thinks that it’s appropriate in America for the government to take two-thirds of someone’s lifetime earnings? A billionaire has already paid millions and millions of dollars in taxes over the course of his life. Why is the government the rightful owner of one’s legacy — the sweat and equity and 60-hour workweeks spent building a business — and not that person’s family members?

The origins of the death tax come from the Communist Manifesto. This tax was touted by Karl Marx as one of the strategies to secure government ownership of assets. Think about it: With a 50 percent death tax, over time the government will own 50 percent of the nation’s assets. With a 100 percent estate tax — and Clinton’s proposal isn’t far from that — the government eventually owns … everything.

This is a big issue, because over the next 25 years or so, tens of trillions of dollars in assets will be transferred from aging baby boomers to their kids and grandkids. The left wants to get its greedy hands on that treasure chest of money. Every American should resist this power grab by the avaricious political class. They are the real robber barons, worshiping money above all else.

If Clinton were to win and adopt this death-tax policy, the small-business model in America would largely disappear. Why build a legacy if you cannot pass it on? Donald Trump should insist that it is your right as an American to leave your worldly possessions to your children.

Trump would eliminate the death tax. He understands that the proper role of government is to facilitate wealth creation, not to destroy it.

Clinton’s campaign justified this new confiscation tax by saying that only a few hundred people every year would pay it. That misses the point. An unjust law is unjust whether it applies to 200 people or 2 million people. Americans understand this principal of basic fairness better than the Yale-educated Clinton does. They don’t buy into the politics of greed and envy. That’s why two-thirds of voters favor eliminating the tax, not doubling down on it.

Stephen Moore is an economic consultant with Freedom Works and a senior economic adviser to the Donald Trump campaign.