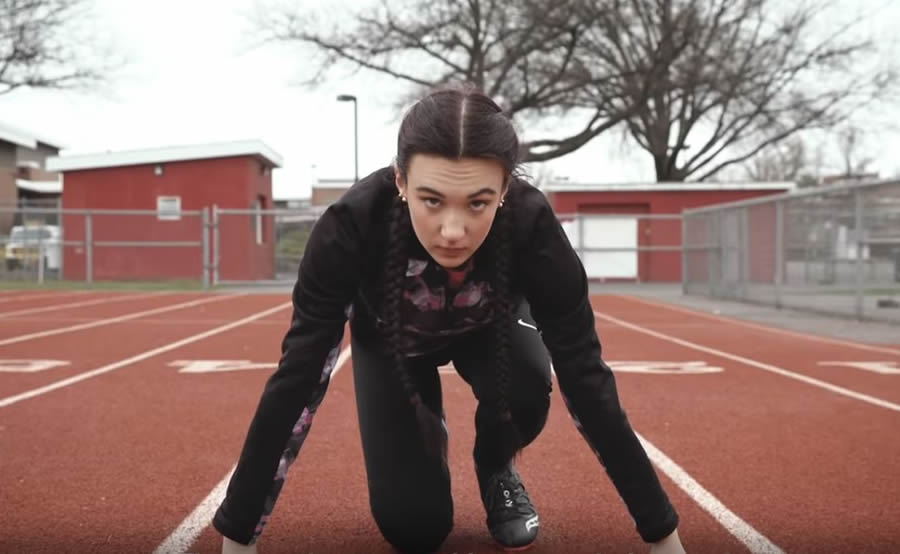 A female high school athlete who didn’t qualify for a track event because two boys who identify as girls ran faster filed a complaint Monday with the Department of Education’s Office of Civil Rights.

“No one in the state of Connecticut is happy about this, but no one has enough courage to speak up,” Selina Soule said during an interview with Tucker Carlson that aired Monday night on his Fox News Channel show.

Selina competes in track at Bloomfield High School in Bloomfield, Connecticut. She wasn’t able to qualify for the 55-meter event in the New England regionals because two spots were taken by biological boys, as The Daily Signal’s Kelsey Bolar documented in a recent video report on the 16-year-old’s situation.

She is far from the only female athlete disadvantaged by policies that allow transgender girls to compete with biological girls, Selina told Carlson on Tucker Carlson Tonight.

“I haven’t been the only one affected by this,” she said. “There have been countless other female athletes in the state of Connecticut, as well as my entire indoor track team. We missed out on winning the state open championship because of the team that the transgender athlete was on.”

“Alliance Defending Freedom, on behalf of Selina and a couple of other brave female athletes, has filed or is in the process of filing a Title IX complaint asking the Department of Education to step in, to investigate, and to restore a level playing field for Selina,” Holcomb said.

The Department of Education’s Office of Civil Rights enforces Title IX, the federal law that “protects people from discrimination based on sex in education programs or activities that receive federal financial assistance,” according to the agency’s website.

If the two boys who identify as girls had not been allowed to compete as girls, Selina says, she would have placed sixth and had the opportunity to run the 55 in front of college coaches at the New England regionals.

Her complaint, according to a press release from Alliance Defending Freedom, asks the Education Department “to investigate illegal discrimination against the Connecticut athletes,” including Selina.

Since the Connecticut Interscholastic Athletic Conference implemented a protocol “that allows biological males who claim a female identity to compete in girls’ athletic events,” the complaint says, “boys have consistently deprived [Selina] Soule and the other female athletes of honors and opportunities to compete at elite levels.”

“Girls like Selina should never be forced to be spectators in their own sports, but unfortunately that is exactly what is taking place when you allow biological males to compete in sports that have been set aside and specifically designed for women like Selina,” Holcomb said. “Title IX was designed to ensure that girls have a fair shake at athletics, and are not denied the opportunity to participate at the highest levels of competition.”

Emilie Kao, director of the Richard and Helen DeVos Center for Religion and Civil Society at The Heritage Foundation, told The Daily Signal in an email that Selina should not be facing such discrimination.

“Women and girls should be free to compete in athletics without fear of injury, and with the expectation that their opponents will be of the same sex,” Kao said, adding:

Policies that allow males to self-identity as females in athletic competition are already politicizing sports and taking away accomplishments and scholarship opportunities from deserving female athletes like Selina Soule and her classmates.

Since Congress passed Title IX in 1972, the number of women and girls participating in sports has risen from 1 in 27 to 2 in 5. This has benefitted their performance in classes as well as on the playing fields.

By ignoring the reality of sex differences, gender identity policies threaten progress and create unfairness and danger for female athletes.