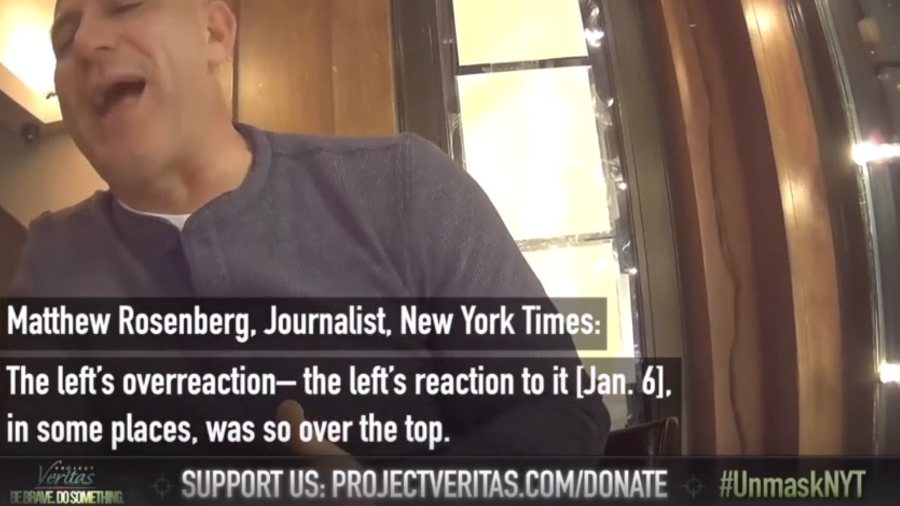 A national security correspondent for The New York Times said the media’s coverage of the Capitol Riot was “overblown” and that the events of Jan. 6, 2021 were “no big deal,” according to undercover video released Tuesday by Project Veritas.

NYT correspondent Matthew Rosenberg and his colleagues have described the reported presence of FBI plants among the rioters outside of the U.S. Capitol a year earlier as a “reimagining” of the “attack.” But in the Project Veritas video, which appears to have been recorded without his knowledge, Rosenberg paints a different picture and claims that “there were a ton of FBI informants amongst the people who attacked the capitol.”

“I know I’m supposed to be traumatized,” Rosenberg said in the video, “but like, all these colleagues who were in the (Capitol) building and are like, ‘Oh my God it was so scary!’ I’m like, ‘f— off!’”

In the video, Rosenberg described the day of the Capitol Riot as “fun,” although he previously reported that the event was “a violent interruption to the transition of power,” according to Project Veritas. “It was like, me and two other colleagues who were there outside and we were just having fun,” Rosenberg said.

The media’s overreaction to the Jan. 6 breach of the Capitol as an organized insurrection gave room for right-wing figures to downplay the day’s events completely, Rosenberg said.

Rosenberg described his workplace at the NYT as “not the kind of place where I can tell someone to man up,” but he said “I kind of want to be like, ‘dude come on, you were not in any danger,’” according to the video. “These f—— little dweebs who keep going on about their trauma … Shut the f— up. They’re f—— b—-s,” Rosenberg said of his colleagues at the NYT.

Rosenberg and the NYT did not immediately respond to the Daily Caller News Foundation’s requests for comment.