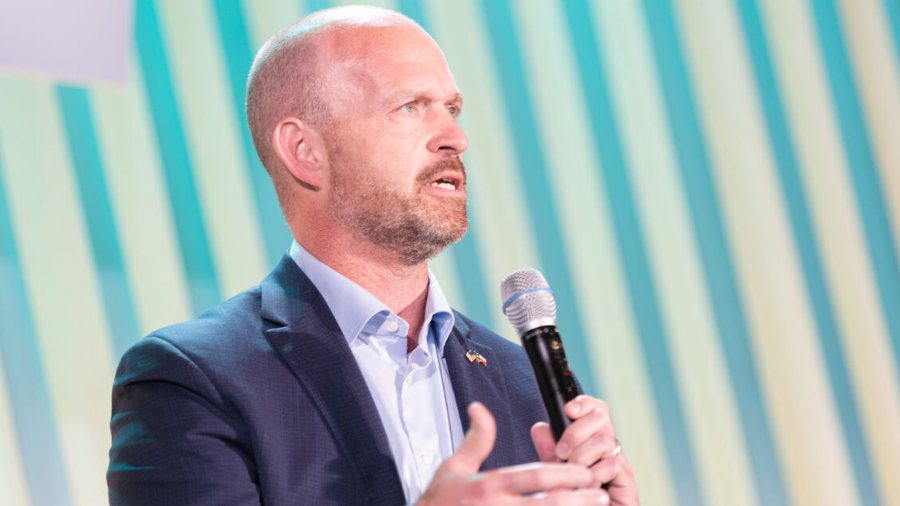 “Coming from a state as free and prosperous as Texas, I’m eager to share the innovative ideas we developed and build on them,” says Kevin Roberts, pictured at The Heritage Foundation's Resource Bank conference earlier this year. Roberts will become the seventh president of the think tank.

Kevin Roberts, a conservative leader with extensive experience in education and public policy, will serve as the next president of The Heritage Foundation, the Washington, D.C. based think tank announced Thursday.

Roberts joins Heritage after serving as president and CEO of the Texas Public Policy Foundation in Austin, Texas for five years.

“While there were many outstanding candidates we interviewed during the search process, Kevin was the best choice to lead The Heritage Foundation at this pivotal time in our nation’s history,” Barb Van Andel-Gaby, chairman of Heritage’s board of trustees, said in a statement.

“Kevin has an entrepreneurial spirit and a deep enthusiasm for conservative solutions, and he will bring with him a different perspective as a D.C. outsider,” she added.

Roberts is the seventh president to lead Heritage since its founding in 1973. (The Daily Signal is the news outlet of The Heritage Foundation.) He will officially take the reins from Kay C. James, who led the organization for over 3 years, later this year.

James said she was thrilled when she learned the board had selected Roberts for the role:

While Heritage ranks as the top think tank in the world for our impact and we have experienced truly incredible achievements during our nearly 50 years, there is still work to be done to ensure that we are prepared for the challenges and opportunities of the next 50 years.

Kevin is here to take Heritage to the next level.

Paul Teller, executive director of Advancing American Freedom, called Roberts a “fantastic choice” in a statement, saying  “He captures the political moment perfectly, able to unify conservatives across the Movement with his masterful blend of intellect and activism.”

Under Roberts’ leadership, the Texas Public Policy Foundation doubled in size. The Texas organization is the largest state think tank in the country with a revenue of around $17 million, as reported in the organization’s 2019 990 form. During his five years as president of the think tank, Roberts worked to expand the organization’s influence by opening an office in Washington, D.C. to help the Foundation’s research influence policy debates.

Before joining the Texas Public Policy Foundation in 2016, Roberts dedicated much of his career to education.

After earning his doctorate in American history from the University of Texas, Roberts worked for a few years as a college professor teaching history. In 2006, he founded John Paul the Great Academy, a K-12 Catholic school in Lafayette, Louisiana, where he served as the president and headmaster for seven years.

In 2013, he became president of Wyoming Catholic College, a liberal arts college located in Lander, Wyoming. Under his leadership he instituted a policy of no federal student loans or grants in order to ensure that the college would never face government pressure to violate its Catholic beliefs.

Roberts and his wife will be moving to the Washington. D.C. area with their four children.

The new president will lead Heritage forward as the organization continues to produce research and policy recommendations in the areas of “education, health care, border security, election integrity, and more,” the think tank said in a statement.

“I’m grateful for the opportunity to lead The Heritage Foundation and honored the board selected me as its next president,” Roberts said, adding that he is eager to further the organization’s legacy:

Heritage has led the conservative movement with distinction and its policy solutions have improved the lives of our fellow citizens. I look forward to continuing this legacy and addressing the challenges we face today and in the future.

Heritage is known throughout the conservative movement and policy community as a solutions factory. As a lifelong, movement conservative, I have always seen Heritage as the beacon of conservatism and of the American dream. In recent years, as I have worked with Heritage scholars on several issues, I came to appreciate Heritage’s critical role at this particular point in history. Coming from a state as free and prosperous as Texas, I’m eager to share the innovative ideas we developed and build on them.

The Heritage board of trustees voted unanimously to elect Roberts as the new president.

The board has been searching for James’ replacement since she and Heritage Executive Vice President Kim R. Holmes announced their resignations in March. Holmes formally stepped down from his position in April.

“When we came on board as the executive leadership team three years ago, we set several goals and told Heritage’s board of trustees that we would serve for three to five years to see them through,” James said in a statement. “We accomplished everything we set out to do. Now it’s time to let someone else take the reins.”

James will become a Heritage distinguished visiting fellow. She will remain a member of the Heritage board of trustees, a capacity she has served in since 2005.

Of all the candidates considered, James says Roberts has the “vision, the passion, the leadership ability, and that down-to-his-core commitment to the True North principles of conservatism combined in one single package that [make] him the obvious choice to lead Heritage.”

Let’s Argue Instead of Judge