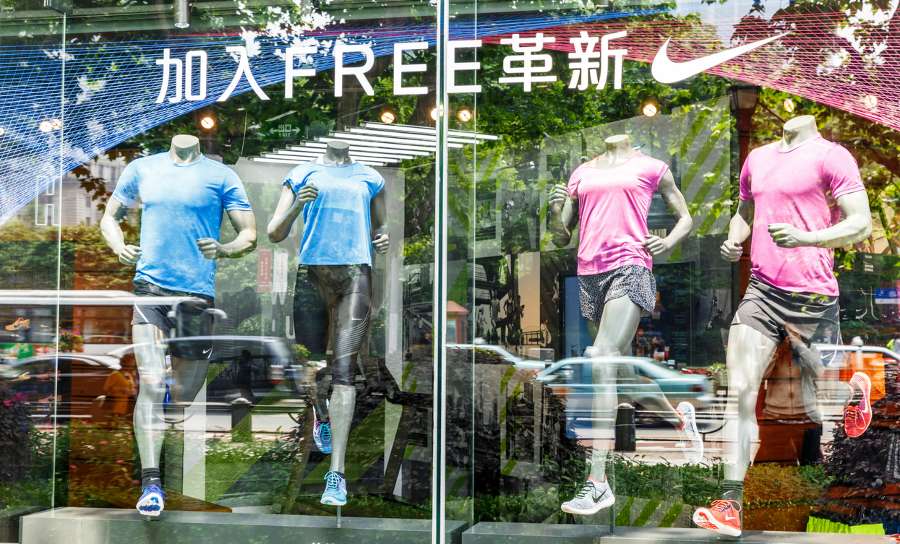 A Nike store window in Shanghai, China, displays sportswear May 11, 2016.

Several public figures and top business leaders who have a financial stake in China have praised the country despite the potential Wuhan lab leak and ongoing Uyghur genocide.

Tesla CEO and SpaceX Chief Engineer Elon Musk praised economic prosperity in China on the 100th anniversary of the ruling Chinese Community Party, according to CNN Business. Nike was criticized after the company issued a statement in March addressing allegations of forced labor in Xinjiang, The Hill reported.

“Nike is committed to ethical and responsible manufacturing and we uphold international labor standards,” the company said in a statement. “Nike does not source products from [Xinjiang] and we have confirmed with our contract suppliers that they are not using textiles or spun yarn from the region.”

“Nike is a brand that is of China and for China,” CEO John Donahoe said during a call defending the company’s business in the country on June 26, according to the Hill. Nike reported around $1.9 billion in earnings from China sales so far in 2021, down from the expected $2.2 billion but still 17% higher than the same period last year, Fox Business reported.

"Of China and for China." @Nike's CEOJohn Donahoe doesn't care that the CCP is committing #UyghurGenocide or that Nike is complicit in #UyghurForcedLabor.

Nike should care about genocide.

Go to https://t.co/ngyXZsGz5B to add your voice to ending brand complicity in slavery. pic.twitter.com/4vj6REcpWT

Millions of people, including a majority of Uyghur Muslims, have been forced into labor concentration camps and tortured in Xinjiang since 2014, Prime Minister of the East Turkistan Government in Exile Salih Hudayar told the Daily Caller News Foundation on Feb. 5.

Musk previously said the Chinese government would “become the biggest economy in the world” during an interview with state media group China Central Television in March, CNN Business reported. A majority of the Tesla vehicles made and sold in China around the same time were recalled for problems with the cruise control systems.

“The economic prosperity that China has achieved is truly amazing, especially in infrastructure! I encourage people to visit and see for themselves,” Musk said in a tweet on June 30.

John Cena apologized to China after referring to Taiwan as a country while promoting Fast & Furious 9, video shows.

Berkshire’s stake in the electric-car manufacturer was worth around $1.6 billion in 2018, and grew to around $5.9 billion at the end of 2020, according to Fortune.

“Communists did the right thing,” Munger said in the interview, adding that he wants U.S. financial regulators to operate more like the Chinese, CNBC reported.

U.S. intelligence community officials are investigating whether COVID-19 was leaked from a lab in Wuhan, China, or if it was contracted through a zoonotic origin, the Daily Caller News Foundation reported.

The State Department accused the Chinese Communist Party of “deceit and disinformation” in a fact sheet released in January.

“For more than a year, the Chinese Communist Party (CCP) has systematically prevented a transparent and thorough investigation of the COVID-19 pandemic’s origin, choosing instead to devote enormous resources to deceit and disinformation,” the State Department said in a statement. Researchers at the lab suspected of leaking the virus allegedly experienced symptoms of COVID-19 in the fall of 2019 before the first COVID-19 case was reported, according to the State Department.