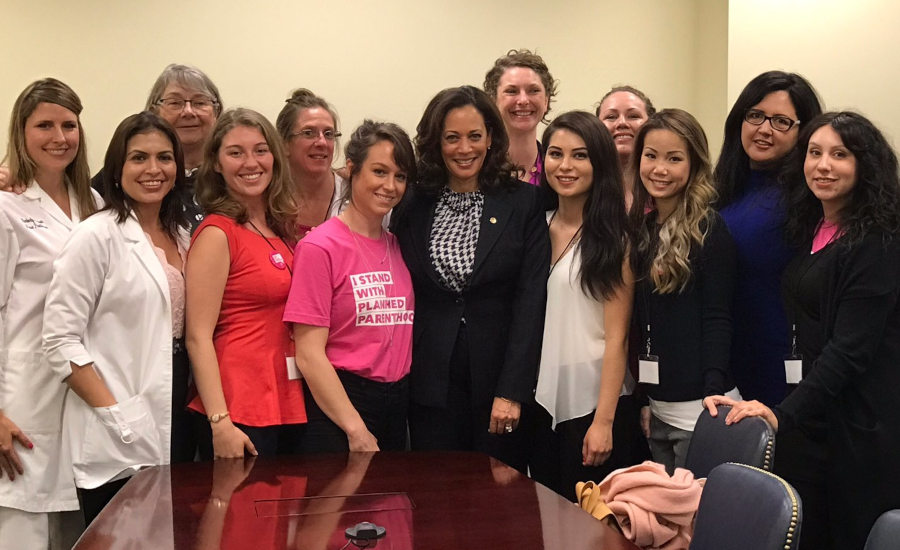 Sen. Kamala Harris posted a photo of herself with Planned Parenthood advocates on Twitter March 1, 2017, writing, "Meeting with fierce advocates for Women’s Health from @PPACT is a really good way to kick-off #WomensHistoryMonth #IStandWithPP"

The California Democrat, who the Planned Parenthood Action Fund called a “steadfast champion for reproductive rights and health care,” has made it clear that she would prioritize women’s “reproductive health” from the White House.

“We cannot go back to the days before Roe v. Wade where people were dying from unsafe abortions,” she tweeted in January. “Reproductive health is on the ballot in 2020.”

Activists like Americans United for Life CEO Catherine Glenn Foster warn that Harris could present a greater threat to pro-life causes than Biden.

The California senator has a 100% voting record with the National Abortion Right’s Action League’s Congressional Record on Choice for every year that she has served in the Senate. The organization praised Biden for picking Harris as his running mate, pointing to her years-long support of abortion.

“She has cosponsored critical legislation to protect and advance reproductive freedom, including the Women’s Health Protection Act (WHPA) to protect our right to access abortion care free from medically unnecessary restrictions and bans, the Global HER Act to expand access to reproductive healthcare internationally by permanently ending the global gag rule, and the EACH Woman Act to block racist bans on abortion coverage like the Hyde Amendment once and for all,” NARAL Pro-Choice America said in a Tuesday statement.

I am sick and tired of Republican politicians restricting women’s access to reproductive health care, especially abortion. We have got to build a coalition of Americans who will fight to ensure women get the care they need.

Harris also said she would not consider a running mate who opposed abortion rights, according to the Times article. Her Medicare for All plan promised to provide comprehensive reproductive health care and to establish a list of states that would be banned from imposing pro-life laws without the approval of the Department of Justice, Vox reported.

Harris and Biden previously clashed over abortion during the July 2019 Democratic debates. Harris highlighted Biden’s flip on the Hyde Amendment, which bans the use of federal funding for abortions except in cases of rape, incest or if the mother’s life is in danger.

“You made a decision for years to withhold resources to poor women to have access to reproductive health care, including women who were the victims of rape and incest,” Harris told Biden. “Do you now say that you have evolved and you regret that?”

Harris supported the United States Supreme Court’s decision against a Louisiana law in June. The law required abortion providers to obtain admitting privileges to a hospital within 30 miles of the abortion facility, ABC News reported.

Harris called the Supreme Court ruling “a huge victory for reproductive rights” in a tweet.

“Abortion is a fundamental issue of justice in America and we will never stop fighting for it,” she added.

When Harris evaluated Brian Buescher for a Nebraska district judge seat in 2018, the senator highlighted his association with the Catholic charity organization, the Knights of Columbus, noting the group’s opposition to abortion, the National Review reported.

“Since 1993, you have been a member of the Knights of Columbus, an all-male society comprised primarily of Catholic men,” Harris said in a written question. “In 2016, Carl Anderson, leader of the Knights of Columbus, described abortion as ‘a legal regime that has resulted in more than 40 million deaths.’ Mr. Anderson later said ‘abortion is the killing of the innocent on a massive scale.’”

As a Catholic organization, the Knights of Columbus support official Catholic doctrine that states abortion is “a crime against human life” and that marriage should be between a man and a woman, according to the Catechism.