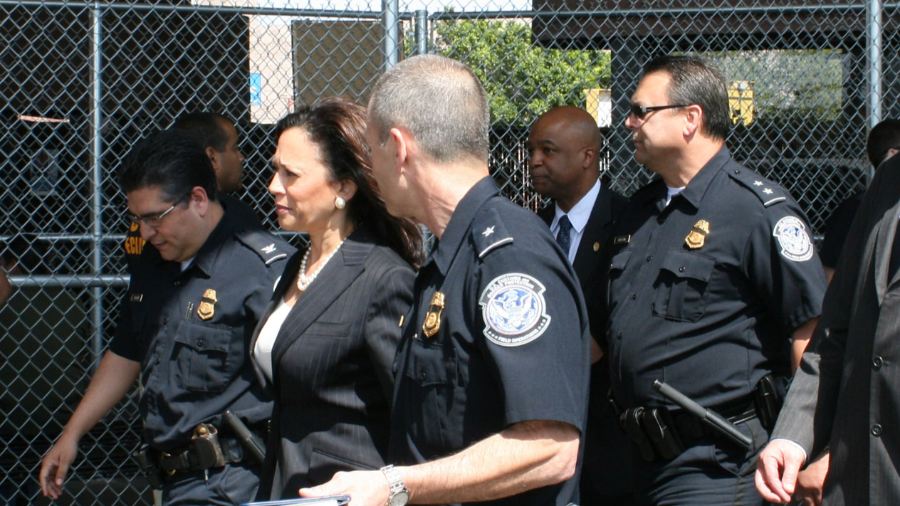 Presumptive Democratic presidential candidate Joe Biden selected Harris, who labeled herself as California’s “top cop” when she served as the state’s attorney general, to be his running mate Tuesday. Some progressives, however, criticized the pick citing Harris’ record as a prosecutor in California.

A joint statement from Roots Action and Progressive Democrats of America Tuesday said Harris “failed for years to hold police accountable for gross misconduct in California” and that they would hold her accountable if she was elected to be vice president.

Former national press secretary for Vermont Sen. Bernie Sanders’ 2020 Democratic presidential campaign Briahna Joy Gray tweeted, “We are in the midst of the largest protest movement in American history, the subject of which is excessive policing, and the Democratic Party chose a ‘top cop’ and the author of the Joe Biden crime bill to save us from Trump.”

She added: “The contempt for the base is, wow.”

The American Federation of Labor and Congress of Industrial Organizations (AFL-CIO), which is a federation of dozens of unions including the International Union of Police Associations, came out in support of Harris being chosen as Biden’s running mate Tuesday.

“I think that a big part of this conversation really is about reimagining how we do public safety in America,” Harris told The View host Meghan McCain, who asked if police departments should be defunded. “We have confused the idea that to achieve safety, you put more cops on the street instead of understanding to achieve safe and healthy communities, you put more resources into the public education system of those communities, into affordable housing, into home ownership, into access to capital for small businesses, access to health care regardless of how much money people have.”

Harris’ history with police dates back to when she first ran for elected office in the early 2000s.

Harris ran for San Francisco district attorney in 2003 against one of the country’s most progressive district attorneys, Terence Hallinan. During the campaign, Harris attacked Hallinan for being weak on crime and for having a low conviction rate, SF Gate reported.

“Let’s be clear. I’m not running for public defender,” Harris said during a December 2003 debate. “We need in our city to have a district attorney who recognizes her responsibility for making sure the consequences occur for serious and violent crime.”

One of Harris’ 2003 campaign pamphlets depicted a man holding a gun and says “enough is enough,” according to a photo from The Intercept. The inside of that pamphlet mentions that the San Francisco Deputy Sheriffs Association endorsed her.

“I believe they believe she will be easier on police misconduct than I’ve been,” Hallinan said, explaining why the union endorsed Harris.

Harris beat Hallinan in the run-off election and assumed office in January 2004.

In 2007, Harris wouldn’t support state legislation that would allow the public to view disciplinary hearings, according to The New York Times. Police unions had come out against the legislation.

“There could not have been a more profound wall of silence,” said Gloria Romero, the former state senate majority leader who authored the bill, according to The Times. “It’s easy to call yourself progressive today, but I mean, come on, it’s easy to reinvent yourself.”

Gary Delagnes, who had been the president of the San Francisco Police Officers Association when Harris was the district attorney, called her the city’s most “pro-public safety D.A.” of the last 20 years, The Times reported.

In 2010, a judge accused Harris’ office of not having a policy for producing exculpatory information on police witnesses after a crime technician, who had been convicted of domestic violence in the past, was caught skimming drugs, according to The Times.

“She never pushed hard for it, and we were obviously happy about that,” Delagnes said of Harris’ lack of a policy, according to The Times.

As California’s attorney general, Harris wouldn’t support a 2015 bill, which would’ve required her office to appoint a special prosecutor to investigate any incident in which a police officer used deadly force, The Times reported. The special prosecutor would alone decide if charges would be filed.

Harris has been outspoken in criticizing police brutality and advocating for criminal justice reform in recent years. She has also been vocal about police brutality in the months following Floyd’s death.

“For too long, Black people in America have been burdened with the unjust responsibility of keeping ourselves safe from police,” Harris and Sen. Cory Booker of New Jersey wrote in a June op-ed.

“And for too long, Congress has failed to require accountability and hold officers who do wrong responsible for their actions to prevent the killing of Black Americans at the hands of law enforcement from occurring again, and again, and again.”

Harris current position, though, seems to contrast with her record as a prosecutor in California.

“She is Jekyll and Hyde from what she was in 2004,” Delagnes said, according to The Times. “That is not the Kamala Harris that I knew.”

Content created by The Daily Caller News Foundation is available without charge to any eligible news publisher that can provide a large audience. For licensing opportunities of our original content, please contact licensi[email protected]