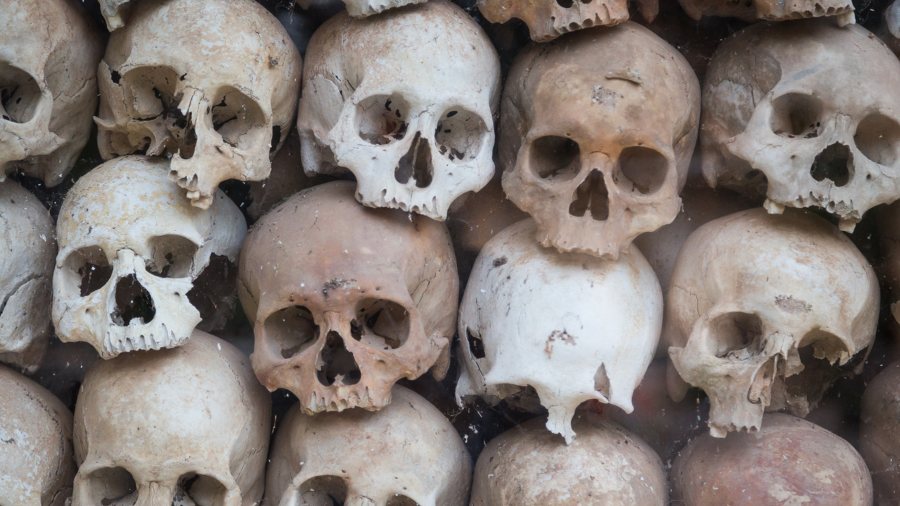 The remains of the victims of the Communist Party of Kampuchea, displayed in a temple in Siem Reap, Cambodia, April 7, 2014.

George Santayana famously said that those who don’t know history are doomed to repeat it. That was demonstrated when a Florida representative made a remarkable claim last week on the floor of the state House of Representatives. He claimed socialism never killed anyone.

Rep. Carlos Guillermo Smith (D), representing the University of Central Florida area (Orlando), defended “democratic socialism” with this amazing statement: “These are semi-allegations that socialism has killed people around the world. My question is, ‘Are you at all concerned that by focusing on democratic socialism, which has exactly resulted in no deaths, no one being physically harmed, and not addressing the very real problem of neo-Nazism, white supremacy, and fascism in the last four years, we are sending a very bad message?’”

Socialism has harmed no one, brought no deaths? To condemn socialism sends “a very bad message”?

Socialism, beginning with its anti-God premise, has caused immeasurable harm all over the world.

First of all, the Nazi movement itself was the National German workers’ socialist party. The Nazis caused an abundance of “physical harm” and death. The Holocaust, which killed six million Jews and millions of other victims according to the United States Holocaust Memorial Museum, could not have taken place if the National Socialists in Germany had not been able to seize power.

Secondly, the socialist countries that went full-bore into communism resulted in tens of millions of deaths. Socialism and communism are two sides of the same coin — the communist side being more violent than socialism.

But to implement true socialism, forced government redistribution of wealth, the state resorts to violence. It happens everywhere socialism is fully implemented.

The Power of Capitalism at Work in Norway, Denmark and Sweden

If one argues that the AOCs and the Guillermo Smiths and Bernie Sanderses of the world are not talking about that kind of socialism, but rather the more gentle “democratic” kind as found in the Scandinavian countries, I would disagree. What you have in Norway, Denmark, and Sweden are capitalist societies with generous state welfare programs.

I know Norway firsthand, having been married there and having visited a dozen times with my Norwegian-born wife. Throughout the country, you see bustling capitalism at work, which is then heavily taxed for social welfare programs. You also see an overall homogenous society still coasting on its Protestant work ethic. What you don’t see is the iron fist of socialism/communism at work.

Meanwhile, the trail of death and physical harm from socialism and communism is immense.

The Crimes of Socialism/Communism

Writing for The New York Times, Tony Judge calls this book: “An 800-page compendium of the crimes of Communist regimes worldwide, recorded and analyzed in ghastly detail by a team of scholars. The facts and figures, some of them well known, others newly confirmed in hitherto inaccessible archives, are irrefutable. The myth of the well-intentioned founders — the good czar Lenin betrayed by his evil heirs — has been laid to rest for good. No one will any longer be able to claim ignorance or uncertainty about the criminal nature of Communism, and those who had begun to forget will be forced to remember anew.”

In his foreword to the book, author Martin Malia notes, “Communist regimes did not just commit criminal acts (all states do so on occasion); they were criminal enterprises in their very essence: on principle, so to speak, they all ruled lawlessly, by violence, and without regard for human life.” Many of the contributors to the book were disillusioned former socialists/communists.

And it all began with their false premise that there is no God. No God — no accountability. What a shock Lenin, Stalin, Hitler, Mao, and Castro must have faced when they died — and found out indeed there is divine accountability after all.

For all of the United States of America’s flaws, and we hear about them ad nauseum, the founders recognized that our rights comes from the Creator. In a purely socialist state, the state is god, and it is the government that bestows rights — or takes them away. And there is no higher appeal than the state.

In his 1996 book, The Quest for God, the great British historian Paul Johnson points out: “The evil done in our times is beyond computation and almost beyond the imagination of our forebears. More than 150 million people have been killed by state violence in [the 20th] century. … the two greatest institutional tyrannies of the century — indeed of all time — the Nazi Reich and the Soviet Union, were Godless constructs: modern paganism in the first case and openly proclaimed atheist materialism in the second. The death-camps and the slave-camps were products not of God but of anti-God.” And it began with forcing socialism on people.

Only by ignoring history can anyone claim that socialism has not caused harm in the world.