Release From the Fear of Death 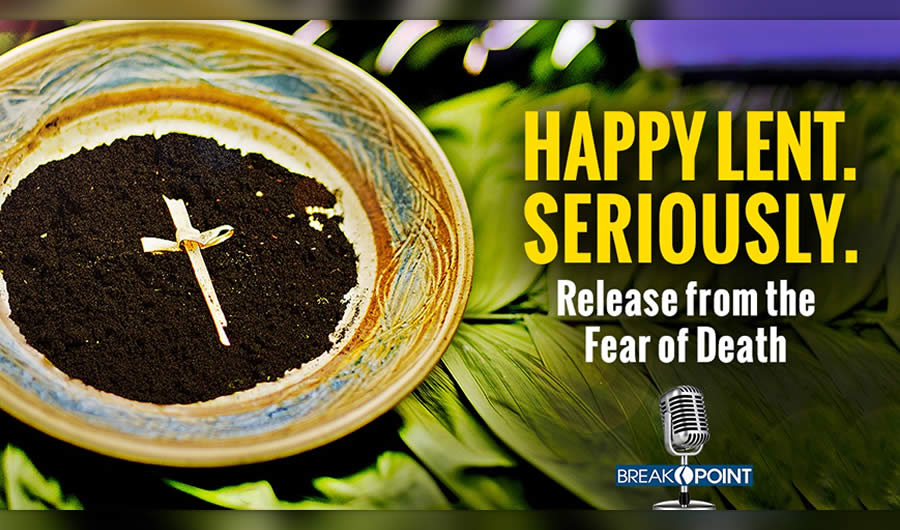 Today is Ash Wednesday, the beginning of the forty-day period in the church calendar known as Lent, a time of preparation leading up to Holy Week and Resurrection Sunday. Around the world, countless Christians will have the sign of the cross written on their foreheads in ash — what is known as the imposition of ashes — and will hear the words, “Remember that you are dust and to dust you will return.”

That reminder, along with the various exercises in self-denial associated with Lent, can give the forty days prior to Good Friday and Easter Sunday a somewhat gloomy tone.

But that would be missing the point. During Lent, we confront our mortality not only to be reminded of it, but also in order to better understand why we need not fear it.

Make no mistake, our culture fears mortality, and goes to absurd lengths to keep that fear at bay. Our attempts to avoid death are the stuff of science fiction, such as uploading their consciousness to a computer and a kind of medical vampirism.

It’s not only tech luminaries who try to keep thoughts of their mortality at bay. We all do. Years ago, when my grandfather was dying, he suffered terribly for about three or four months. In sorrow, I remember asking my pastor, “Why doesn’t God just take him?”

Honestly, I expected my pastor to say something along the lines of, “Well, God has His ways, and His own timing.” But he said something more important that I’ll never forget: “Because your grandfather,” he said, “needs to know his mortality before he meets his maker.”

Now if that sounds a bit unkind, or even cruel on God’s part, recall that God did not spare his only Son in this regard. The Epistle to the Hebrews speaks of Jesus “tasting death for everyone.” As New Testament scholar Mary Healy writes in her commentary on Hebrews, “To ‘taste’ death means to experience its bitter reality. Jesus drank the cup of suffering and death to its dregs.”

What’s more, Jesus experienced this “tasting” as one of us in every way except sin. Later in chapter 5, Hebrews, referring to the Lord’s experience in the Garden of Gethsemane, says that “During the days of Jesus’ life on earth, He offered up prayers and petitions with fervent cries and tears to the one who could save Him from death.” The Gospels also describe the physical and emotional toll of Jesus’ encounter with his mortality: “And being in anguish, [Jesus] prayed more earnestly, and his sweat was like drops of blood falling to the ground” (Luke 22:44).

And yet as we know, that wasn’t the end of the story. Less than seventy-two hours later, Jesus destroyed death. Not only that, as the author of Hebrews tells us, He freed “those who all their lives were held in slavery by their fear of death.”

This freedom is about more than the promise of heaven, although, as Paul tells us, to be with Christ is gain. As Healy writes,

We instinctively resist and recoil from everything that reminds us of our mortality — pain, deprivation, weakness, criticism, failure. This paralyzing fear … leads to various forms of escapism and addiction, induces us to grasp the false security nets proffered by Satan, and keeps us from pursuing the will of God with freedom, peace, and confidence.

And that’s why Lent, including its reminder of our mortality, is the farthest thing from gloomy. Yes, like the “founder and perfecter of our faith,” we will taste death. But by God’s grace, death’s power over us, in this life as well as the next, is destroyed. And that’s great news.

Whether or not you typically participate in Lenten activities — like the imposition of ashes, fasting, or giving up something — I hope you’ll still use these forty days to face and ponder your mortality, with an eye to Jesus’ resurrection, and the resurrection that awaits all of us who belong to Him.