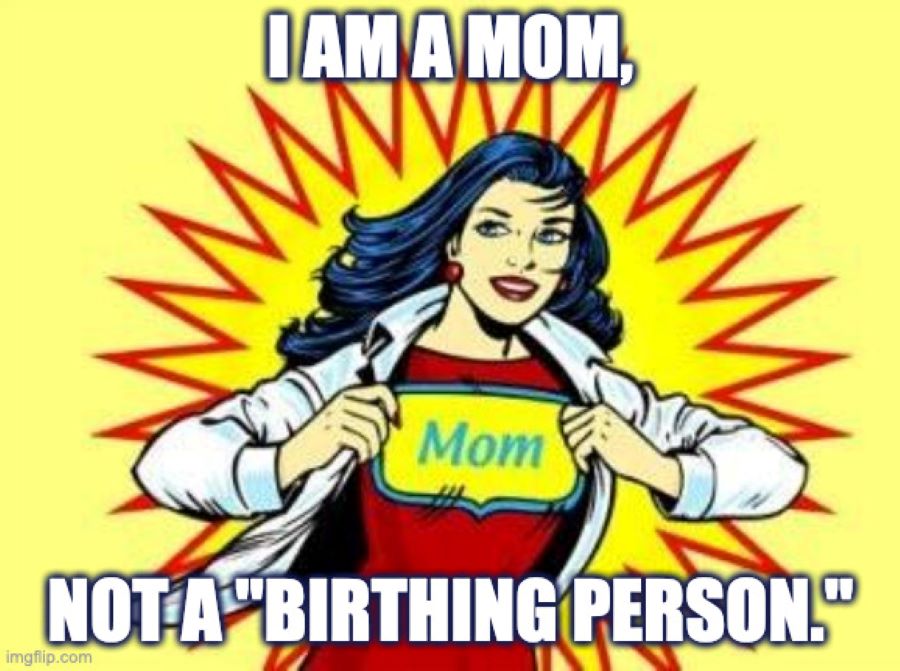 Have you heard? Now we can’t say “mother,” but instead, “birthing person.” After all, the “science” tells us that men or women can have babies. In fact, the words “woman” and “man” are forbidden by the new dispensation. The word “man” is now “prostate haver,” and “woman” is “vagina haver.” The word “father” has become “non-birthing parent.”

Surely, this sort of craziness only happens in Hollywood or D.C, right?

I’m afraid not. Recently, the Louisiana Legislature considered a bill that would prevent therapists helping kids overcome gender confusion. The bill said kids who think they were born in the wrong body should be “affirmed” rather than given the opportunity to talk their feelings through with a licensed professional. One of the speakers in favor of the bill stated, (around the 34-minute mark) “The only people who need therapy are parents who can’t accept their queer children.”

What will this mean for clergy who try to counsel confused young people? Will they be taken to therapy?

What about situations like Walt Heyer’s? He tried to live as a woman for eight years. He found that all the medical interventions and “social transitions” did not solve his underlying problems. As a child, he was abused, physically and emotionally and sexually. The people who rushed to “transition” him did not want to talk about that. Now, Walt and his wife devote themselves to helping others who have been swept away by the gender ideology.

“Everything you do [as transgender] is about self destruction. You’re changing your name. You’re putting stuff in your body that doesn’t belong. You’re cutting body parts off… The fact is, no one in the history of mankind has ever changed their gender… This idea of becoming your true self is false. You’re becoming your phony self… Everyone who identifies as a transgender is trying to destroy themselves.”

Prolific author and public speaker Walt Heyer lived as a woman for eight years before realizing that his transition was an attempted escape from his abusive childhood. Now Walt speaks out on the harm and falsehood of “gender transitioning.” Through his website, sexchangeregret.com, he receives thousands of emails daily from people seeking help transitioning back to themselves.

Of the thousands of “transitioned” people Walt has worked with, “None of them had gender dysphoria. It was about some underlying cause [where now] you just don’t like who you are.”

The questions he asks them are: “’Why do you want to destroy who you are? Why do you engage in self-destructive behavior? What happened to you that caused you to not like who you are?’ These questions help people understand why they’re behaving the way they’re behaving … . People bury the child abuse so they don’t have to deal with it. The gender industry is all about keeping people from looking at those issues … .Transitioning doctors are only helping people inappropriately cope with trauma.”

The good news is, healing and restoration are possible. For a family member or loved one of a transitioner, make yourself available to that person, and remember that there is hope.

Is what’s happening in today’s culture rapid onset gender dysphoria or social contagion? Who is behind the transgender craze and why? Hear Walt’s take on these issues and more in this video.

Walt Heyer will be receiving the Public Witness of the Year award at the Ruth Institute’s Summit for Survivors of the Sexual Revolution, June 24-25 in Lake Charles, Louisiana. If you’d like to meet him in person, Early Bird Registration ends Friday, May 20. Get your tickets now for nearly 50% off before the price goes up Saturday!

“Conversion Therapy” is a misnomer. The term “conversion therapy” is an ideologically loaded term, invented by the opponents of any therapeutic intervention to address the problems in living associated with same sex attraction. A more accurate term would be “Change-Allowing Therapy,” meaning that the therapeutic intervention strives to allow the client to change their patterns of thoughts, behaviors, feelings, and attractions in accordance with their own beliefs and goals.

Another appropriately descriptive term would be “Sexual Orientation Change Efforts,” meaning the therapy attempts to change the client’s patterns of thoughts, behaviors, feelings, and attractions. But like virtually all forms of psychological therapeutic interventions, client and therapist alike realize there is no guarantee that all the presenting problems will be completely solved.

Banning “Conversion Therapy” is Unnecessary: Torture is already illegal. If religious groups are secretly torturing people, this can be prosecuted under existing law.

Banning “Conversion Therapy” is illogical: The underlying premise of these bans is that sexual orientation is an immutable trait. This is a very strong claim. Even a single person who successfully changes his sexual orientation is sufficient to refute it. But there are in fact numerous examples of people who change their patterns of thoughts, behaviors, feelings, and attractions.

Read the full statement on what’s wrong with banning Sexual Orientation Change Efforts by scrolling to the first resource on the Transgender Resource Center.

For Once, the Sexual Revolutionaries Aren’t Wrong

“The Sexual Revolutionaries fretting over gay marriage and contraception are not wrong,” said Ruth Institute President Dr. Jennifer Roback Morse, Ph.D. “Once the Court stops propping up the Sexual Revolution with so-called rights invented out of thin air, a lot of ‘settled issues’ are up for grabs.”

“Although in his draft of a Roe decision, Justice Samuel Alito said it would not impact other so-called rights, like gay marriage, logic would suggest otherwise,” Morse observed.

“Roe v. Wade was decided over 49 years ago,” Morse noted. “But Obergefell v. Hodges — which mandated homosexual marriage nationwide — was only decided in 2015. Doesn’t that make Obergefell a less important precedent?”

“The Supreme Court found rights in the Constitution that simply aren’t there. There’s no right to privacy, which the Court claimed to find in the First Amendment. This imaginary right to privacy was the foundation for Griswold and Eisenstadt as well as Roe. And there is no right to gay marriage in the 14th Amendment,” Morse explained.

“Part of the original Bill of Rights, the First Amendment was enacted to protect freedom of speech and religion. It says nothing about privacy, let alone abortion.”

“The 14th Amendment was ratified after the Civil War to prevent Southern states from abridging the rights of ex-slaves. Only justices bent on legislating from the bench could interpret that as requiring same-sex marriage nationwide,” Morse charged.

“The Court frequently changes its mind about divisive topics,” Morse said. “In the 1858 Dredd Scott decision, it said slaves are property. In 1896, it said ‘separate but equal’ in education was constitutional. In 1954, it said it was not.”

“There is one important difference between Roe and Obergefell though.” Morse continued. “Roe galvanized the pro-life community and created a vibrant authentically grassroots nationwide movement. After Obergefell, proponents of marriage threw up their hands and said, ‘Oh, well, we tried,’ and moved on to other issues. The right-to-life movement never gave up and has had many successes.”

“If the Supreme Court does recognize a right to life, it gives hope to those of us who never gave up on man-woman marriage.”

The Ruth Institute’s upcoming 5th Annual Summit for Survivors of the Sexual Revolution June 24-25 in Lake Charles, LA, will feature a keynote speech by Kristan Hawkins, President of Students for Life of America. There will be multiple sessions on gender ideology, and Morse will present: “Defending Traditional Christian Sexual Ethics like a Pro.”