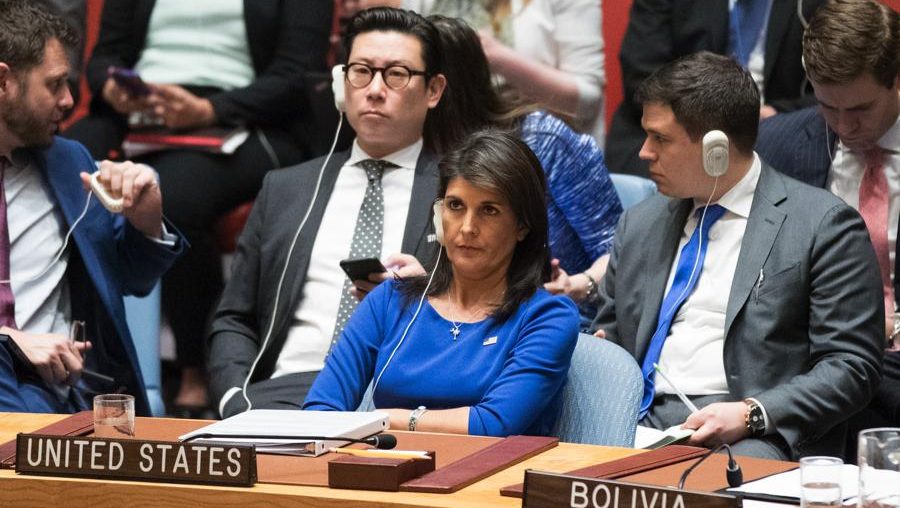 As Russia and the U.S. traded barbs at the United Nations over the coalition strike on Syria, U.S. Ambassador to the U.N. Nikki Haley warned that the U.S. is “locked and loaded” should the Syrian regime decide to use chemical weapons again.

“I spoke to President Trump this morning and he said if the Syrian regime uses this poisonous gas again, the United States is locked and loaded,” Haley said at an emergency U.N. Security Council meeting called by Russia. “When our president draws a red line, our president enforces the red line,” she added, referencing former President Barack Obama’s failure to follow through on his threat to use military force in Syria should the Assad regime use illegal chemical weapons.

In response to a deadly chemical weapons attack allegedly perpetrated by the Syrian government under the leadership of Bashar al-Assad last weekend, a coalition force consisting of American, British, and French naval and aviation assets bombed three targets in Damascus and Homs said to be affiliated with Syria’s chemical warfare infrastructure early Saturday morning.

Russian guns were silent during the attack, the Pentagon revealed at a press briefing Saturday.

“This is how you want international affairs to be conducted now?” Vassily Nebenzia, Haley’s Russian counterpart at the U.N. asked. “This is hooliganism in international relations, and not minor hooliganism, given that we’re talking about major nuclear powers,” he said, putting the Syrian civil war in the broader context of rising tension between the U.S. and Russia.

The U.S. argues that the horrific chemical weapons attack in the suburbs of Damascus last Saturday is a burden Russia must bear, as it failed to ensure that the Syrian regime abandoned its chemical weapons, as the Obama-era agreement required.

Last April, the Trump administration bombed a Syrian airfield after a deadly Sarin gas attack on innocent civilians. “Clearly the Assad regime did not get the message last year. This year, the U.S. and our allies have struck harder,” Secretary of Defense James Mattis said Friday evening at the Pentagon.