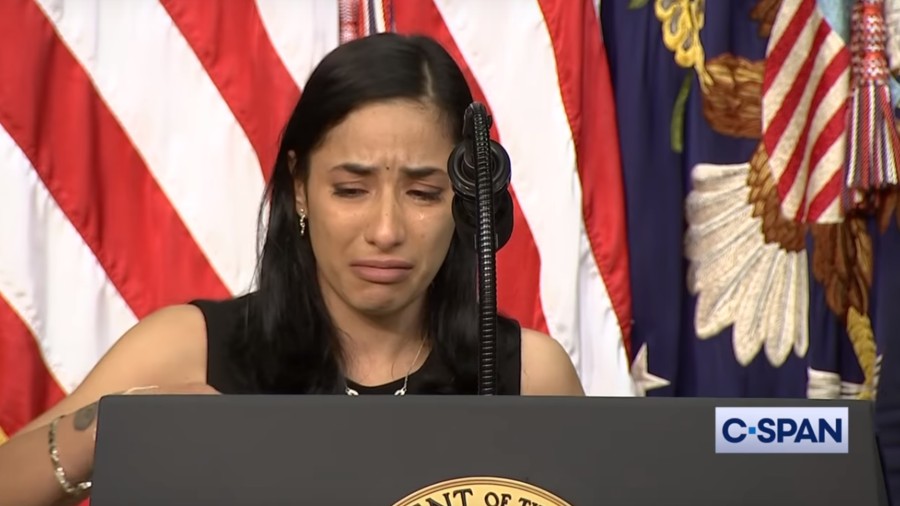 Daria Ortiz’s voice cracked when speaking at a White House event Friday, as she described how New York City’s “sanctuary city” status let her family — and the rest of the city’s residents — down.

Khan, from Guyana, was previously arrested on assault charges, but the city released him, despite an Immigration and Customs Enforcement detainer request.

Sanctuary jurisdictions are cities, counties, and states that provide a safe haven for illegal immigrants — in some cases, dangerous criminals — and obstruct federal immigration enforcement. That usually comes in the form of ignoring ICE detainer orders, except when there is a court order.

“Before coming to America, [Fuertes] worked as a secretary for the president in her native country, the Dominican Republic. She is a shining example of people who come legally to this country, work hard and do the right thing, and are law-abiding citizens,” Ortiz said. “My grandmother raised her children and her grandchildren while working hard to give us a future.”

Ortiz stood with President Donald Trump in the Eisenhower Executive Office Building next to the White House, speaking to a crowd of about 220 U.S. Border Patrol agents and family members at a gathering of the National Border Patrol Council, the agents’ union.

During the event, Trump spoke about his administration’s immigration policies, the border wall, and cracking down on sanctuary jurisdictions.

The Justice Department recently filed lawsuits against the states of California and New Jersey, as well as against King County, Washington. All three lawsuits argue that the states and the county have violated the Supremacy Clause of Article VI of the Constitution, contending the jurisdictions are flouting federal immigration laws.

“Unfortunately, my grandmother had to be the example of why something like this horrific crime should never happen,” Ortiz said, adding:

Our family’s hope is that her death was not in vain and that preventative measures are put into place to ensure that nothing like this happens to anyone again.

The tragedy in all of this is the fact that this could have been avoided had there been no sanctuary law.

“The man that is responsible for this should have never had the opportunity to do this, had his multiple offenses not been ignored,” Ortiz said, adding:

The system not only failed our family, but it failed our city. Our family would like to thank the administration for acknowledging my family’s tragedy and extending their concern.

Trump, who introduced Ortiz, returned to the podium and called for Congress to pass legislation that would allow the families of victims of crimes committed by illegal immigrants to sue municipalities over sanctuary laws.

A bill to do just that, the Justice for Victims of Sanctuary Cities Act, was introduced in the Senate by Sen. Thom Tillis, R-N.C., and a companion House bill was introduced by Rep. Ted Budd, R-N.C., last summer. No action has taken place on either bill, according to Congress.gov.

“Not one more American life should be stolen by sanctuary cities,” the president said. “They are all over the place, and a lot of people don’t want them. Many, many communities don’t want them in California. The politicians want them for whatever reason.”

The California Legislature and Gov. Gavin Newsom made it the nation’s first sanctuary state.

“That’s why we are calling on Congress to pass legislation giving American victims the right to sue sanctuary cities and hold them accountable for the suffering and the damages that they’ve caused,” Trump said.

“American citizens are entitled to safe neighborhoods and safe streets that, really, the people in this room have provided when given the opportunity,” he said, referring to the Border Patrol agents at the event. “The sanctuary cities are not really giving that opportunity.”

This Conservative Group Fought the IRS for Years. Now a Court’s Given It a Victory