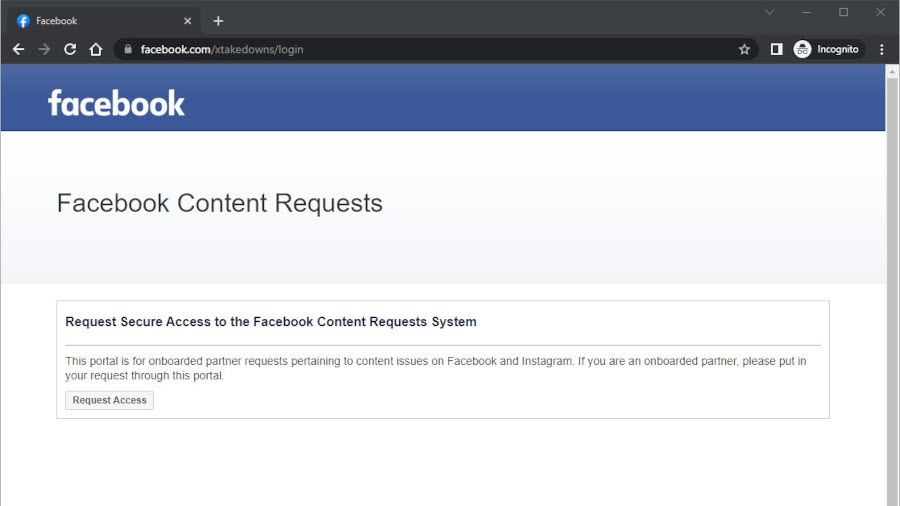 A screenshot of facebook.com/xtakedowns/login shows a portal that is used to access a government reporting system, according to a leaked set of slides explaining how to use the portal.

The Department of Homeland Security has left open a special feature that allows government officials to flag Facebook posts for misinformation after scrapping a controversial advisory board tasked with developing guidelines for social media censorship, the Intercept reported Monday.

DHS announced plans for a Disinformation Governance Board to “develop guidelines, standards, guardrails to ensure that the work that has been ongoing for nearly 10 years does not infringe on people’s free speech rights, rights of privacy, civil rights, and civil liberties,” DHS Secretary Alejandro Mayorkas told the Senate Homeland Security and Governmental Affairs Committee in May, according to The Hill. While DHS shuttered the initiative after an onslaught of bipartisan opposition decrying the potential censorship, the Intercept found through an analysis of public and leaked documents that government efforts to police tech companies goes on.

Those activities include a Facebook portal only accessible by government and law enforcement representatives to formally request the platform kill or label alleged misinformation, according to the Intercept. A leaked set of slides contains instructions on how to operate the system, and the URL to access the site — facebook.com/xtakedowns/login — was still active at the time of publication.

“Platforms have got to get comfortable with gov’t. It’s really interesting how hesitant they remain,” a DHS official told a Microsoft representative in February, according to the Intercept.

The U.S. government has for years discussed the scope and scale of online content moderation the government should engage in, as well as how to compel social media platforms to flag or remove “misinformation,” “disinformation” and “malinformation,” the Intercept reported, citing meeting minutes and records appended to a lawsuit filed by Missouri Attorney General Eric Schmitt.

The department now considers rooting out misinformation online as a critical element of its overall mission, according to a draft of the 2022 Quadrennial Homeland Security Review reviewed by the Intercept.

While the document highlights counter-terrorism as DHS’s primary objective, it acknowledges that “misinformation and disinformation spread online” can exacerbate terrorist threats from “domestic violent extremists,” according to the Intercept. It calls for DHS to use advanced computer analytical software and hire experts “to better understand how threat actors use online platforms to introduce and spread toxic narratives intended to inspire or incite violence.”

Statement on the Disinformation Governance Board ⬇️ pic.twitter.com/KXFDgmYLv1

However, DHS has defined the “critical infrastructure” threatened by domestic terrorists to encompass trust in government, public health and election security, according to the Intercept.

“No matter your political allegiances, all of us have good reason to be concerned about government efforts to pressure private social media platforms into reaching the government’s preferred decisions about what content we can see online,” Adam Goldstein, the vice president of research at the Foundation for Individual Rights and Expression, told the Intercept.

Agencies under DHS — Customs and Border Protection, Immigration and Customs Enforcement, the Science and Technology Directorate and the Secret Service — all have directives to combat misinformation online, the Intercept reported, citing a DHS Inspector General report from August.

Meta and DHS did not immediately respond to the Daily Caller News Foundation’s request for comment.