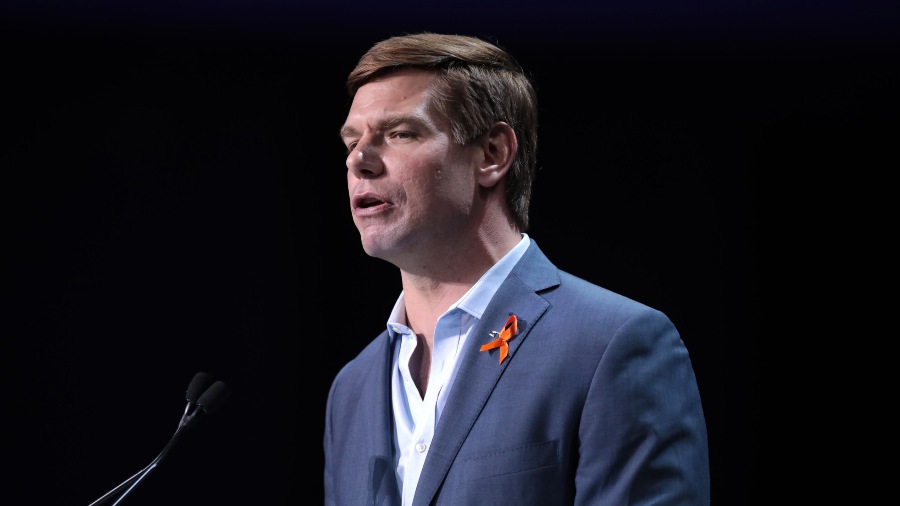 “There’s more than one Eric Swalwell. There could be dozens, probably hundreds of Swalwells.”

There Are “Christine Fangs” Everywhere

I’ll pause to let that imagery sink in. Kind of makes your skin crawl, doesn’t it? The observation comes from China expert Gordon Chang, who’s speaking in the context of Swalwell’s liaison with Chinese undercover agent (translation: spy) Christine Fang, or “Fang Fang.” In the latest episode of The Epoch Times’ video series “American Thought Leaders,” he discusses the ways China has infiltrated our society.

The word he uses is “overwhelmed.”

Swalwell is the representative from California’s 15th congressional district and also a member of the House Intelligence Committee, a fact that almost requires quotation marks around the word “intelligence.” But, as Chang notes, Fang didn’t connect with him after he was on that committee. It wasn’t even when he was first elected as a congressman.

Swalwell was on the city council of Dublin City, California, when Fang first contacted him. The people directing her were investing her time in someone they thought might become valuable in a few years. There are “Christine Fangs” everywhere, and they target both parties, Chang says. It’s so bad, he suggests, that we’ve got to step away from our contacts with China, at least until we can figure out a way forward.

China Has Infiltrated It All

Government, media, academia, business — China’s infiltrated it all. Chang says even the violence we’re seeing on American streets has in part been incited by China. He cites unconfirmed but credible accounts that China is behind a May 31 protest a block away from the White House. Recall that the Chinese consulate in Houston — one of five in America — was closed; apparently it was learned that this particular consulate was being used to plan protests. Reports of other organized protests in Southern California mirror this. Rioters have been overheard speaking Mandarin right in the crowd, not even trying to blend in.

Chang says they use “big data” and artificial intelligence to identify Americans likely to participate in BLM and Antifa protests and send them propaganda videos. Chang calls this “an act of war.” (He also points to examples of this in which instigators were not de-platformed.)

“We’ve got a problem in our country talking about China in realistic terms,” Chang says. They are not just a competitor, as Trump has termed them, but rather an adversary, even an enemy. They talk about us in those terms, with even a militaristic tone.

Chang makes it clear that no one should ever be targeted for being a Chinese American. At the same time, he says some — some — have been supporting Beijing. Some Chinese Americans, he says, are “more loyal to the Communist Party than they are to the United States.” The Chinese need to get real, he says, and understand that it’s time to speak up.

Regardless of the origin of COVID-19, we do know that the leadership of China took steps that they had to know would spread it to other countries. Chang goes so far as to call the death of close to 600,000 Americans from COVID as intentional “mass murder” and “a crime against humanity.” Worldwide, about 3.2 million people have died from this. Chang says this is the first time in history in which one nation has attacked “all the others.”

“What does it take to get us to start to defend ourselves?” he asks.

We know that Chinese scientists knew at the beginning of December, 2019, that the virus was highly transmissible from person to person, and that they waited almost a month to say anything. (I would add that this was during the time House and Senate Democrats such as Eric Swalwell were fixated on the impeachment process.) Chang cites a report from Harvard Medical School that the CCP knew as early as August of that year that they had a highly contagious virus on their hands The Chinese had a legal obligation to inform the rest of the world, and they chose not to. In fact, they simply lied, trying to convince the rest of the world that it was not transmissible and reassuring other countries that they had no need to impose travel restrictions.

It’s Time to Understand the Concept of Evil

One problem democracies have in dealing with this, he says, is that we have a hard time understanding the concept of evil. We typically think in terms of appeasement, preferring to assume that if we’re nice to other countries, they’ll be nice to us. The Chinese do not. In fact, Chang says, their attitude towards us has little to do with our behavior towards them. Our very existence has an “inspirational impact” on the Chinese, he explains, and the Party doesn’t like that. They see it as a threat.

Chang says we’re in a struggle with China “because of who we are…because we are this beacon.”

Chang says we’re not going to give up that role. But I wonder. Unfortunately, I see our current government moving in directions that must please China mightily, from the double standard of justice to the spying on political enemies to the embrace of censorship to moves toward the same kind of “social credit system” they impose on their own people.

Chang cites some of the steps China has taken on social media to spread fake news and create chaos. For example, they spread the rumor that President Trump was going to invoke emergency powers and lock down the whole country. The New York Times reported it. Recall that they lied shamelessly about the origin of the virus, saying it started in the US and that the US Army brought it to Wuhan.

Chang does say that from a strategic point of view, the Chinese are pretty dumb. They’d gradually take over the world, he says, if they just weren’t so aggressive.

Biden Gives China Gifts — And Asks for Nothing in Return

There’s much more detail in his full interview, which also looks at Europe’s gradual awakening to the reality of China; the Hunter Biden issue; WHO concerns; the theft of intellectual property; the actual systemic racism embedded in CCP doctrine; the genocide, institutionalized slavery and rape being perpetrated; and even “probable” forced organ harvesting. He compares these to abominations committed by the Third Reich, saying we respond the way Europe did as Hitler rose to power, issuing warnings that aren’t taken seriously.

For decades, the strategy we’ve had of “engagement” (appeasement) ignored China’s non-compliance with basic standards of decency. We allowed this.

Chang sees Biden’s responses as a mixed bag, criticizing him for “repeating what China is saying” about xenophobia, etc. And Biden repealed Trump’s executive order that prohibited grid operators and utilities from buying equipment from China — bad move. “This is an issue of sabotage,” he says, noting the time China “turned out the lights” in Mumbai, the financial capital of India. Biden gives them gifts, Chang says, but doesn’t ask for anything in return.

“I don’t know why the Chinese leader has some spell over Biden.”