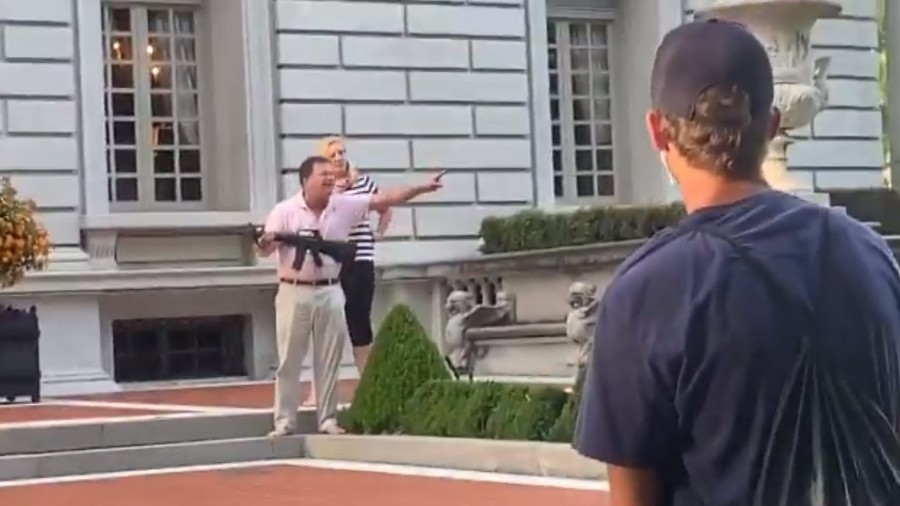 GOP lawmakers wrote a letter to Attorney General William Barr Friday, urging the protection of the firearm rights of the St. Louis couple that saw their guns confiscated after they went viral for defending their home against demonstrators, according to reports.

Mark and Patricia McCloskey were seen in a video brandishing a M16A2-style rifle and small handgun outside of their home as demonstrators broke through a private gate and encroached on their property line in June. Police executed a search warrant Friday and confiscated the couple’s rifle, and later their pistol, despite not yet filing any known charges against the pair, according to KSDK News.

The dozen Republican congressmen who signed the letter to Barr said the decision to commandeer the family’s guns could leave a “chilling effect” on all Americans, according to Fox News.

“At this crucial time in history, our nation needs the Department of Justice to exert strong leadership to ensure that none of our constitutional protections are eroded by mob rule,” the lawmakers wrote in the letter, according to Fox News. “Charges against this couple will have a chilling effect on the entire nation, sending the message that American citizens no longer have the right to protect themselves at their own homes.”

In a video posted to social media, peaceful protesters in St. Louis calling for police reforms walked past a couple brandishing firearms as they were ordered to stay away from the couple’s home https://t.co/bYl06iAiTo pic.twitter.com/wOZ1Wr3yac

The signers of the letter were Reps. Louis Gohmert and Brian Babin of Texas, Paul Gozar of Arizona, Andy Harris of Maryland, Mo Brooks of Alabama, Greg Steube of Florida, Alex Mooney of West Virginia, Ted Budd of North Carolina, Steve Watkins of Kansas, Steve King of Iowa, Scott Perry of Pennsylvania, and Jody Hice of Georgia, according to Fox.

“We complied with the search warrant. They took my AR,” McCloskey told Starnes. “I’m absolutely surprised by this.”

Shannon Bream, a Fox News host, showed pictures of the warrant and photos of the officers holding the rifle on her show Saturday.

The pistol held by Patricia McCloskey was not initially confiscated during the search warrant, as it was in the hands of their former attorney, Al Watkins, according to Fox 2. Watkins gave the handgun to police on Saturday.

Watkins said the gun was “inoperable” well before Patricia McCloskey pointed it at demonstrators.

Watkins said the gun Patricia McCloskey was shown holding was not operable, and the inoperable nature of the weapon "significantly preceded" the date of the incident on June 28 https://t.co/EWPbfV7vnt