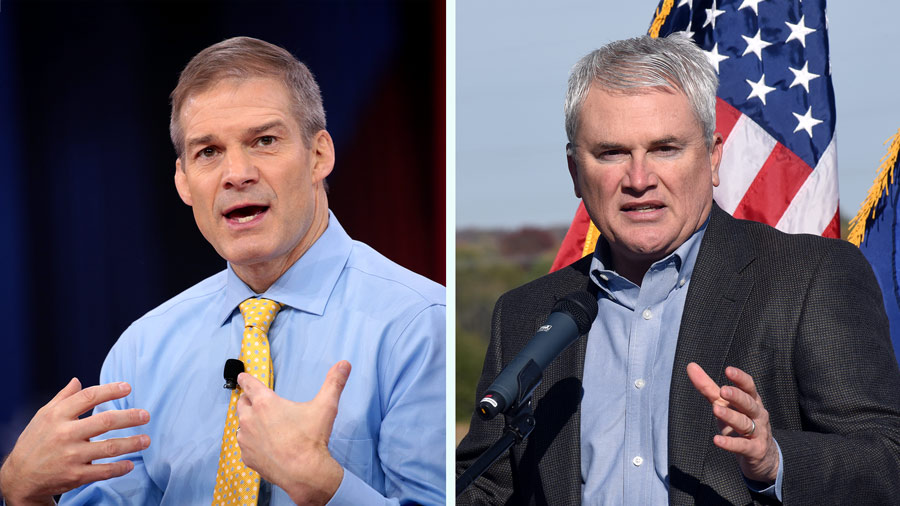 Wednesday’s newsletter reviewed what newly revealed court documents show about the FBI’s undercover work in advance of the January 6 rally, stressing that the first order of business for our new GOP Congress must be to determine what role the Bureau played in that protest-gone-bad.

New GOP Congress Will Be Busy

Political Rot at the FBI

Jordan’s committee will be in charge of the investigation into how the FBI and “Justice” Department have been weaponized against political adversaries.

As many as 20 to 30 FBI agents have now come forward as whistleblowers on the politicization of the FBI. When asked what the American people are going to learn from these individuals, Jordan said the committee is already well aware of what has happened within the Bureau, with one whistleblower telling Iowa Sen. Chuck Grassley’s office that the FBI is “rotted to the core at the top levels.” In other words, the rot has consumed the leadership, such as that at the Washington field office, but not most of the rank-and-file.

Jordan invoked the name Timothy Thibault, whom you’ll recall had headed the Washington field office and was outed by a whistleblower as the official who deep-sixed the Hunter Biden laptop story ahead of the 2020 election. Another whistleblower identified Thibault as the official who pressured agents to label cases as “domestic extremism,” even if it was a stretch, to further the narrative that Trump supporters were responsible for such crimes.

This shows how much damage just one guy in a strategic position can do.

“America is the greatest nation ever,” Jordan said, “but it’s not America if you have a Justice Department that’s political, that is not treating people equally under the law. That is exactly what we have. So we’re committed to getting the truth out there, because only [then] do you have a chance to actually hold people accountable and change the behavior that is now happening at the highest levels of our Justice Department.”

Rep. Comer’s committee will be investigating the Hunter Biden story. Comer said they already have proof not only that President Biden had knowledge of Hunter’s business dealings — lying repeatedly about that — but also was “a large part” of those deals, as an equity partner.

Today, in fact, Republican members of his committee will hold a press conference in which they plan to “connect the dots” on Hunter and his family, including — especially — President Biden. (Don’t look for it to get much mainstream coverage, though.) They’ll show the PowerPoint presentation Hunter used to outline the plan to his Chinese backers for them to obtain ownership of liquified natural gas from American producers and, beyond that, the drilling infrastructure as well. Readers of this newsletter will already be familiar with this story; Comer must have been referring to the presentation that Hunter’s Chinese assistant JiaQi Bao helped him with.

“When Joe Biden says he’s gonna get tough on China, Joe Biden was a partner with his son in trying to help China get an interest in our natural gas industry,” Comer said.

But it’s Jordan’s Judiciary Committee that will be looking into the role played by the DOJ/FBI in covering up the laptop, particularly their enlistment of Big Tech to do their censorship for them ahead of the 2020 election. Talk about election-meddling — this was some big-time meddling that polls suggest really did change the outcome. Who needs Russia to interfere in elections when we have our own government bureaucracy to do that?

Speaking of censorship, on Wednesday, the FBI and White House got slapped down in a landmark federal case on that issue. This is great.

The FBI was trying to shield special agent Elvis Chan from being deposed in a lawsuit brought by officials in Missouri and Louisiana seeking information relating to collusion between government agencies and Big Tech. Agent Chan had been identified as one of two agents who’d worked with Meta (formerly Facebook) to censor certain stories — presumably laptop stories — from Facebook. White House lawyers were trying to stop his deposition, citing “national security,” an argument that seems more transparently phony these days every time it’s used. Their request was denied by U.S. District Judge for the Western District of Louisiana Terry Doughty, and good for him. The depositions of Chan and other agents will go forward.

This lawsuit doesn’t stop with the FBI, either, as individuals working with the NIH and other agencies are also targeted for their work in censoring inconvenient stories. The COVID lab-leak story is just one example, suppressed in the media for as long as possible as “misinformation.”

Wes Walker at ClashDaily has an excellent piece that reiterates what we said yesterday about the FBI’s use of informants for January 6. He asks the same questions we did — questions the House January 6 Kangaroo Kommittee did NOT ask — most notably about the lack of security the day of the rally, given that informants had presumably told the FBI that certain right-wing groups were planning to disrupt the event. “A National Guard presence would certainly have completely shut down what happened on that day,” he says. Indeed. And the way it happened, we would suggest, is just how they wanted it to happen.

Walker also notes that it’s impossible to square Trump’s offer of thousands of National Guard troops with claims that he wanted an “insurrection.” Highly recommended reading.

By the way, in putting our own commentary together for today, we came across some “fact”-checks from 2021 dismissing as “conspiracy theory” the idea that the FBI was involved in January 6. Those are pretty amusing now.

The DOJ Itself is a Threat to the Rule of Law

Jeff Carlson has a great piece about the report on alleged partisan actions by the FBI compiled by Republicans on the Judiciary Committee. We’ve reported on many of those findings, based on interviews with FBI whistleblowers, but you’ll appreciate Carlson’s level of detail. He makes the case (and I strongly agree) that “the DOJ now represents an actual threat to the rule of law and the separation of powers.” Carlson’s piece is subscription-only at The Epoch Times, but you can read it at the link here.

Even though the midterm elections didn’t turn out as well as we’d hoped, we did get the most important thing, and that’s control of the House. Congress has its work cut out for it, to be sure, to start the ball rolling on “Justice” reform, but it’s already started. We know the DOJ was weaponized under Obama and that the same people are currently in control under Biden, with Obama attorney Lisa Monaco in place as deputy AG. If you’d like your memory refreshed or don’t want to just take my word, here’s a pointed commentary about the Obama-era DOJ by Charles Lipson, dated January 24, 2018.

Yes, it would’ve helped to have the Senate, too, but with a majority in the House, we’ll expose, on the record, this bureaucratic tool of the left for what it is. That’s the first step.