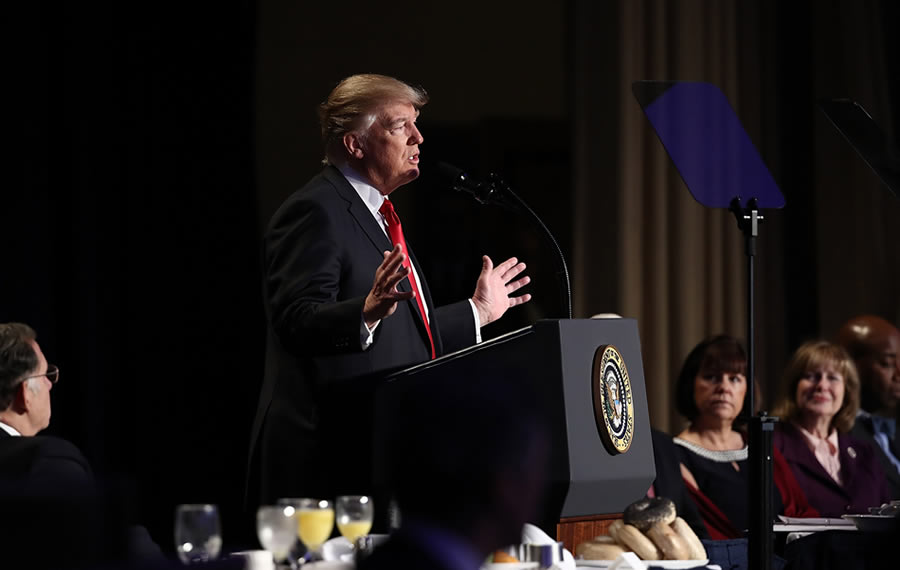 In this Feb. 2, 2017, file photo, U.S. President Donald Trump delivers remarks at the National Prayer Breakfast in Washington, D.C. Every U.S. president since Dwight Eisenhower has addressed the annual event.

In February President Trump made a promise to people of faith across the fruited plain. “My administration will do everything in its power to defend and protect religious liberty in our land,” the president said at the National Prayer Breakfast.

When he campaigned for the White House he stated that the “first priority of my administration will be to preserve and protect our religiously liberty.” “The First Amendment guarantees our right to practice our faith as we see fit … all the time, always, wherever,” he went on to say.

It was partly because of that promise that Trump garnered the support of evangelical Christians. I wrote about this very promise in my book, The Deplorables’ Guide to Making America Great Again. And now House Republicans are calling on President Trump to fulfill the promise he made to Christians on the campaign trail.

I have exclusively obtained a letter signed by more than 52 House Republicans urging the president to sign an executive order on religious liberty.

“We look forward to coordinating with your administration on these efforts so that critical religious liberty and conscience protections may finally be restored to millions of Americans who have been harmed and left unprotected for far too many years,” the letter states.

The executive order would ensure that Americans are not coerced to buy abortion coverage under Obamacare exchange plans — not to mention other health coverage that violates a person’s faith and conscience.

A handful of Republican senators also crafted a letter to the president on April 3 — warning that religious groups on college campuses are being “banned, threatened or forced to change their bylaws.”

“The free exercise of religion rings hollow if individuals do not have the ability to live out their faith without fear of repercussion from the government,” the senators wrote. “The federal government has pushed organizations like the Little Sisters of the Poor to change their health care plan to offer services that violate the Little Sisters’ deeply held religious beliefs,” the senators rightly point out.

Lawmakers also fear that Christians might face persecution as a result of the Supreme Court’s decision to redefine marriage. They referenced comments made by then Solicitor General Donald Verrilli during oral arguments in Obergefell v. Hodges.

Verrilli stated that “nonprofit tax status of religious colleges could be jeopardized should they live out their traditional beliefs about marriage,” the letter read.

I commend these Republican lawmakers for having the courage to write the letters to President Trump. And now I call on President Trump to deliver on his campaign promise. Catholics and Evangelicals need protection from the militant secularists.

Do the right thing, Mr. President.

Todd Starnes is host of Fox News & Commentary, heard on hundreds of radio stations. His latest book is The Deplorables’ Guide to Making America Great Again. Follow Todd on Twitter @ToddStarnes and find him on Facebook.