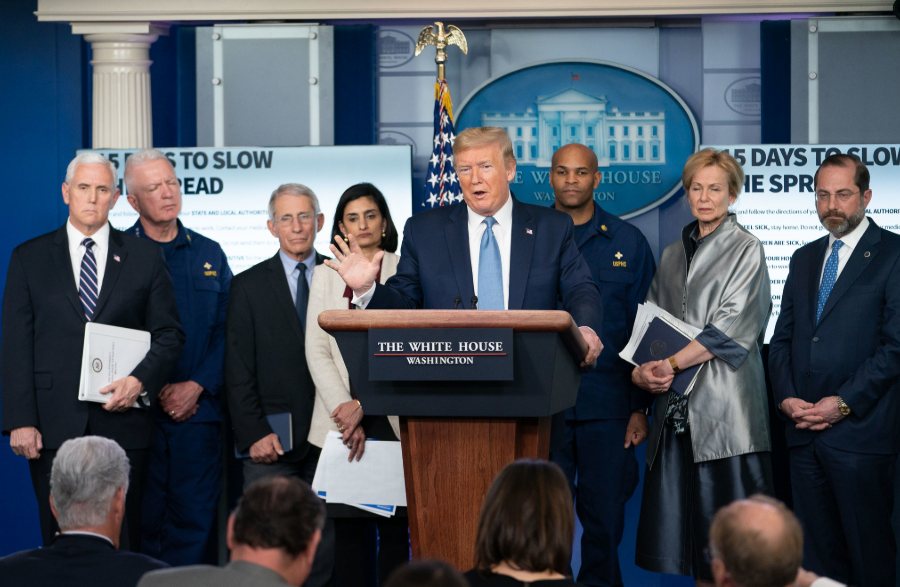 To stimulate a flagging economy amid the coronavirus pandemic, President Donald Trump said Tuesday that his administration is “going big” by sending out checks directly to Americans.

During the daily briefing with the White House’s coronavirus task force, Treasury Secretary Steven Mnuchin said more details are coming, but suggested the amount of money in the checks could be larger than previously reported.

“The [proposed] payroll tax holiday would get people money over the next six to eight months. We’re looking at sending checks to Americans immediately,” Mnuchin said.

“And what we’ve heard from hardworking Americans is many companies have shut down, whether it’s bars or restaurants. Americans need cash now, and the president wants to get cash [out] now. I mean now: in the next two weeks.”

The Trump administration seems to be abandoning the payroll tax cut that it has advocated since last week, because it would not infuse cash into the economy quickly enough when businesses are closing temporarily and the travel and hospitality industry face hardship, leading to workers losing hours if not their jobs.

Asked about $1,000 checks to each American, as Sen. Mitt Romney, R-Utah, has proposed, Mnuchin said: “I think it’s clear, we don’t need to send people who make $1 million a year checks.”

Trump, referring to coronavirus as “this invisible enemy,” said the goal is to get money to working Americans as quickly as possible.

“Obviously, some people shouldn’t be getting checks for $1,000,” Trump said. “We’ll have a pretty good idea by the end of the day what we’re going to do.”

The president said there are four different ways to do it.

“A payroll tax is one way, but it [would] come over a period of months, many months. We want to do something much faster than that,” Trump said.

Trump said the economy needs “a big infusion” of cash as opposed to passing smaller measures.

“We want to go big, go solid. The country is very strong,” Trump said. “With this invisible enemy, we don’t want airlines going out of business. We don’t want people losing their jobs and not having money to live when they were doing very well just four weeks ago.”

The airline industry is in a crisis that is worse than 9/11, Mnuchin said of the effect of COVID-19.

“For the airline industry, they are almost ground to a halt,” the treasury secretary said. “The president wants to make sure that although we don’t want people to travel unless it’s critical, we want to maintain the right to have domestic travel.”

As of Tuesday afternoon, the Centers for Disease Control and Prevention had reported 4,226 cases of COVID-19 across 49 states, with 75 deaths.

On another front, Trump announced that Medicare has made a historic expansion of the telehealth program to help seniors who need checkups stay at home.

“Today we are announcing a dramatic expansion of our Medicare telehealth services,” Trump said. “Medicare patients can now visit any doctor by phone or video conference at no additional cost, including with commonly used services like FaceTime and Skype. A historic breakthrough.”

This has not been done before. In addition, states have the authority to cover telehealth services for their Medicare patients. And by doing this the patient is not seeing the doctor per se, but they are seeing the doctor. So, there is no getting close. During this time, we will not enforce applicable HIPAA penalties so that doctors can greatly expand services for their patients using telehealth.

Trump later responded to a question about whether pointing out that coronavirus came from China creates a stigma. The president and other administration officials countered Chinese officials who have said the U.S. military started the virus.

These Five Catholic Dioceses Have Not Suspended Masses

‘I am the Individual’: DC Priest With Coronavirus Reportedly Gave Communion at Services With More Than 500 in Attendance