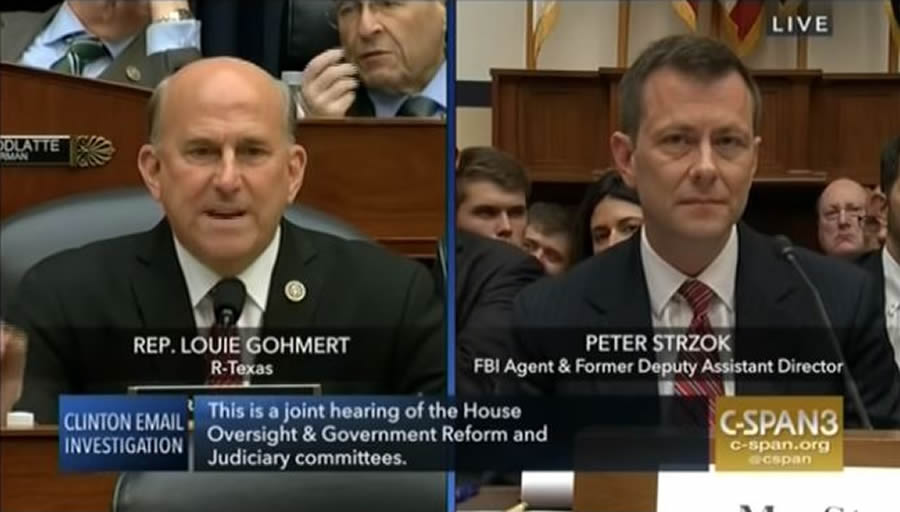 A member of the House Committee on the Judiciary said during a hearing Thursday that a government watchdog found that nearly all of former Secretary of State Hillary Clinton’s emails were sent to a foreign entity and that the FBI didn’t follow-up on that finding.

The Intelligence Community Inspector General (ICIG) found an “anomaly on Hillary Clinton’s emails going through their private server, and when they had done the forensic analysis, they found that her emails, every single one except four, over 30,000, were going to an address that was not on the distribution list,” Republican Rep. Louie Gohmert of Texas said during a hearing with FBI official Peter Strzok.

“It was going to an unauthorized source that was a foreign entity unrelated to Russia,” he added.

Gohmert said the ICIG investigator, Frank Rucker, presented the findings to Strzok, but that the FBI official did not do anything with the information.

Strzok acknowledged meeting with Rucker, but said he did not recall the “specific content.”

“The forensic examination was done by the ICIG and they can document that,” Gohmert said, “but you were given that information and you did nothing with it.”

He also said that someone alerted the Department of Justice Inspector General Michael Horowitz to the issue.

“Mr. Horowitz got a call four times from someone wanting to brief him about this, and he never returned the call,” Gohmert said.

The ICIG previously caught problems regarding Clinton’s server that the FBI missed. The bureau didn’t notice that some emails were openly marked classified with a “(C)” when they were sent.

The ICIG spotted the oversight after the FBI missed it, texts between Strzok and his mistress, former FBI lawyer Lisa Page, show.

“Holy cow,” Strzok wrote, “if the FBI missed this, what else was missed? … Remind me to tell you to flag for Andy [redacted] emails we (actually ICIG) found that have portion marks (C) on a couple of paras. DoJ was Very Concerned about this.”

In late 2017, ICIG Chuck McCullough — who was appointed by former President Barack Obama — took the unusual step of coming forward publicly to say that he perceived pushback after he began raising the alarm about issues with Clinton’s servers to then-Director of National Intelligence James Clapper.

He said he found it “maddening” that Democrats, including Sen. Dianne Feinstein of California, were underselling the amount of classified information on the server.

McCullough said he “expected to be embraced and protected,” but was instead “chided” by someone on Capitol Hill for failing to consider the “political consequences” of his investigative findings, Fox News reported.

The ICIG has not publicly disclosed the findings Gohmert described in the meeting between Rucker and Strzok, but the congressman said the watchdog can document them.

Thursday’s exchange is below:

Gohmert: You said earlier in this hearing you were concerned about a hostile foreign power affecting the election. Do you recall the former Intelligence Community Inspector General Chuck McCullough having an investigation into an anomaly found on Hillary Clinton’s emails?

Let me refresh your memory. The Intelligence Community Inspector General Chuck McCullough sent his investigator Frank Rucker along with an IGIC attorney Janette McMillan to brief you and Dean Chapelle and two other FBI personnel who I won’t name at this time, about an anomaly they had found on Hillary Clinton’s emails that were going to the private unauthorized server that you were supposed to be investigating?

Strzok: I remember meeting Mr. Rucker on either one or two occasions. I do not recall the specific content or discussions.

Gohmert: Mr. Rucker reported to those of you, the four of you there, in the presence of the ICIG attorney, that they had found this anomaly on Hillary Clinton’s emails going through their private server, and when they had done the forensic analysis, they found that her emails, every single one except four, over 30,000, were going to an address that was not on the distribution list. It was a compartmentalized bit of information that was sending it to an unauthorized source. Do you recall that?

Gohmert: He went on the explain it. And you didn’t say anything, you thanked him, you shook his hand. The problem is it was going to an unauthorized source that was a foreign entity unrelated to Russia and from what you’ve said here, you did nothing more than nod and shake the man’s hand when you didn’t seem to be all that concerned about our national integrity of our election when it was involving Hillary Clinton. So the forensic examination was done by the ICIG — and they can document that — but you were given that information and you did nothing with it. And one of the things I found most egregious with Mr. Horowitz’s testimony, and — by the way Mr. Horowitz got a call four times from someone wanting to brief him about this, and he never returned the call.