It's a question with real practical implications for living the Christian life. 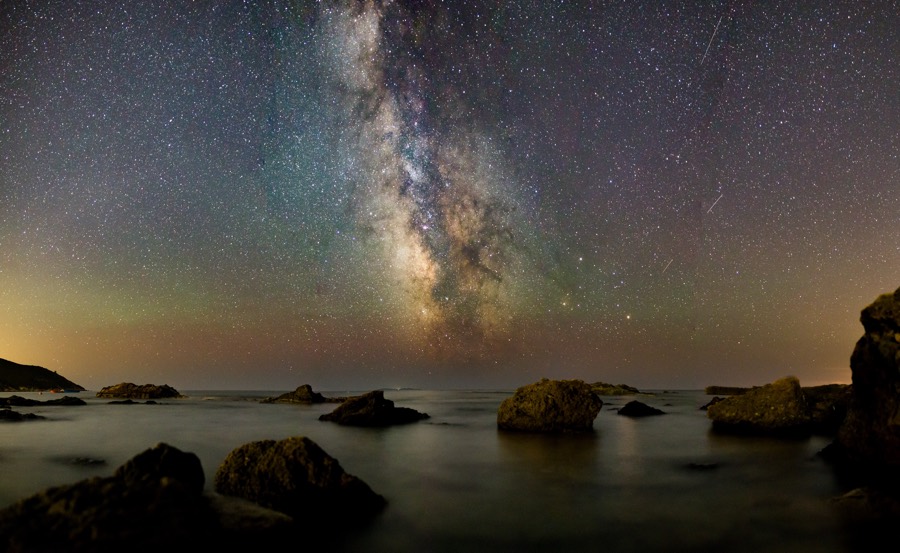 The quick answer is that He couldn’t have “put it” anywhere. There wasn’t a “where” to put it until after He’d created it. On that level, it’s a nonsense question, too. That’s if all you’re after is an answer. There’s more to it than that, though. Walk with me through this. You’ll find that it can lead to a whole new appreciation of God’s power and presence with us.

So let’s start at the beginning, or rather, before the beginning. We know God is eternal; time and space are not. He created both in one magnificent creation instant.

The first time I did this exercise it was with my family. My daughter complained, “My brain hurts.” I like how she put that. “Good!” I answered. “You’re getting the point.”

Now, what can we say of God before He did that? That question has its problems, too, but let’s press on regardless. (It’s an essential part of the path that leads to greater appreciation of God.)

First, “before” can’t mean anything like, “in the final twenty-minute countdown before he created time,” or “for the billions of years before.” There were no minutes or years; there was no time at all, for God had not created it.

This is beyond human comprehension: we can only think of it by analogy. That’s okay: God is supposed to be beyond our understanding. So I’ll use “before” in quotation marks. It’s inaccurate, but it’s the best we can do.

So then, what was reality like “before” creation? I’ve led groups in an exercise that helps them see the answer; or rather to see how impossible it is to see. The exercise works better when you hear it spoken, but I’ll let you read it anyway. (This is a condensed version.)

At this point I always emphasize the point of the exercise: not to imagine that we are God, but to demonstrate just how far God is beyond our imagining or conceiving. Then I continue:

You decide at some point that you want to create something other than yourself. Realize how original this thought must be, for nothing “other than yourself” has ever existed. Human creativity is always combining existing ideas and materials in new ways. This act of creativity, however, is no act of re-combining; it requires inventing something absolutely new.

So what are you going to create? Trees? Sky? Stars? No fair. You’re not inventing, you’re repeating what you’ve already seen. If you were truly the only reality, you never would have seen anything like it. You’d have to come up with it all on your own.

From here I go on to develop this theme.

I think I do okay creatively as a writer, but then I consider how many variations God has done on the simple theme of “maple leaf” — so beautiful this time of year! — not to mention the infinite array of people and of natural objects he has made.

And then I ask, “Suppose you decide to create space. Remember, you’re imagining you’re the only reality. When you create this new thing called ‘space,’ where are you going to put it?”

The first time I did exercise it was with my family. My daughter complained, “My brain hurts.” I like how she put that. “Good!” I answered. “You’re getting the point. God is that much greater than our brains can comprehend.”

There Was No “Where” To Put It

We rightly say that God created the universe out of nothing, but we must be careful not to fall into the careless error of thinking God took some “nothing” and made stuff out of it. There was no “nothing,” any more than there was time or space. God was, again, all of reality.

If your brain wasn’t hurting before, maybe it is now. I’m certainly hoping this will affect you that way. God is simply too far beyond our comprehension. There are some things we can know about him; others are way out of reach.

Notice, though, that the attempt can turn into one more way for you to encounter God’s transcendent greatness. It leads to recognizing how unimaginably different he is from us; how much higher, more infinite (if that phrase even makes sense), more independent of the reality we live in.

Indeed, he is so absolutely transcendent, his other-ness could lead one to despair, even to abject fear. Our one hope — and it is more than sufficient! — is that he has taken the initiative to reveal himself to us, especially in Jesus Christ. He reached down to meet us on our level, and even to reconcile us to him, for our race was living in rebellion to his infinite goodness and power. Only through his initiative do we have any hope. But he has done what it takes, so we can worship him with love and thankfulness — yet never forgetting he is uniquely and amazingly God over us.

Recognizing the Reality of His Presence With Us

That’s one of the practical applications I promised you for this not-quite-nonsense question. The second is this: it helps us remember where God is when we need him. He’s right here. All of him, entirely, fully there with you, and fully here with me.

He’s fully present in every location, yet without being contained in any location. He has to be. Think of where you’d have to go to encounter more of God. You could walk across the room or drive across the country. Would you be moving from one bit of God to another, from one part to the next? Are you encountering more of him that way?

Not at all! God doesn’t have parts. He exists whole, complete, and undivided in every place and in every way. Granted, the way he manifests himself, or makes himself known, may differ from place to place. But he himself is absolutely the same, entire and complete, in every location, large or small.

And that means that the God who created the universe is right there with you in every possible way. He’s there for you, in every way consistent with his loving and holy character.

Do you need him? His love? His guidance? His infinite power? He’s as present with you right now as he could possibly be. All of him.

So we can worship him, and we can trust him. That’s not nonsense after all, is it? That’s drawing closer to the eternal truth of our Creator.