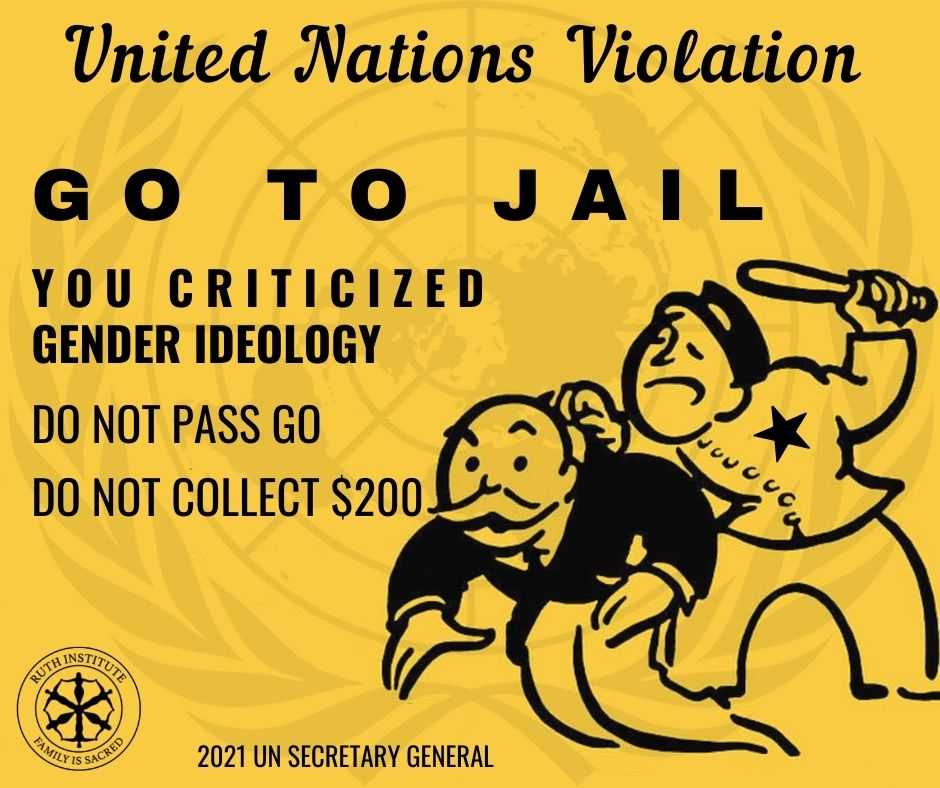 “This is typical of the devious U.N. bureaucracy,” said Ruth Institute president Dr. Jennifer Roback Morse, PhD., of a report by the U.N. Secretary General which seeks criminal penalties for those who criticize gender ideology.”

“First they have an ‘independent expert,’ who’s neither independent nor an expert, produce a report that contains their talking points,” Morse explained. “Then they forward this document to the General Assembly. Whether or not it takes any action on the report, activists can use it to give their ideology what seems to be a stamp of approval.”

“In this case, the ‘expert’ is Victor Madrigal-Borloz, who produced a report warning of ‘backlash’ against what he calls the human rights advances achieved by LGBTQ groups. He claims said backlash is produced by ‘ultra-conservative political leaders and religious groups’ promoting bigotry by dehumanizing these people.”

“Madrigal-Borloz wants to create a crisis atmosphere by warning of an impending upsurge of violence caused by these reactionary elements,” Morse charged. “Then he calls on U.N. member states to criminalize speech that opposes the gender ideology.”

“In all likelihood, the General Assembly will ignore this latest in a long line of reports seeking to legitimize gender dogma,” Morse predicted. “The United Nations has never recognized the transgender ideology. A majority of its members do not allow same-sex marriage.”

“Even so, there’s now what can be passed off as an official U.N. document, which activists can cite to advance their cause.”

Madrigal-Borloz produced a similar report last year calling on countries to criminalize talk therapy for those with unwanted same-sex attraction. In the current report, he warns of the “exclusionary narratives” of U.S. groups that seek to keep “trans” boys from playing girls’ sports.

Morse concluded: “These reports are a smokescreen for advancing the gender ideology. They only represent the views of the authors and the bureaucrats who commission them.”

The Abortion/Breast Cancer Link is Real

“October is Breast Cancer Awareness Month, but one thing the medical establishment doesn’t want women to be aware of is the abortion/breast cancer (ABC) link,” said Dr. Jennifer Roback Morse, Ph.D., President of the Ruth Institute.

On a recent episode of the Dr. J Show, Dr. Morse interviewed Dr. Joel Brind, a medical researcher with degrees in biology and endocrinology, and who has studied the ABC link for almost 30 years. He says most cancer researchers are well aware of the connection but go to great lengths to suppress it for political reasons. 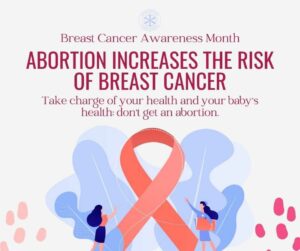 In the interview, Brind describes how the National Cancer Institute thwarted his efforts to get accurate information on the record. He lost research privileges at two hospitals over the issue.

Morse noted, “The ‘cancel culture’ goes back further than most people realize. Dr. Brind was ‘canceled’ in the 1990s.”

“The facts are undeniable,” Morse continued. “The American Cancer Society says one in eight women will develop invasive breast cancer over the course of her lifetime. However, according to Dr. Angela Lanfranchi, who spent decades studying the ABC link, since abortion was legalized in America in 1973, the incidence of breast cancer rose 40%.”

Morse added: “Statistically, while 15% of women who smoke get cancer, 5-10% of women who’ve had an abortion get breast cancer. Both are strong indicators, and yet the medical establishment does its best to ignore or ridicule the idea that there might be a connection between breast cancer and induced termination of a pregnancy.”

“Brind, Lanfranchi, and their colleagues did a meta-analysis of 20 studies of South Asian women showing a relationship between breast cancer and abortion. Yet even the possibility of such a connection will not be part of this month’s cancer awareness campaign.”

“The Sexual Revolution has created a Grand ‘Sex Positive’ Narrative to convince people that sexual activity is an entitlement for anyone capable of giving meaningful consent. If abortion presents significant downsides, risks or problems, as an increased risk of getting breast cancer would, viewing casual sex as an entitlement would no longer make sense.”

Do You Know What’s Happening to Your Body?

The latest Dr. J Show features Jackie Aguilar, an expert in fertility regulation through natural means. She teaches both the Couple to Couple League and the Creighton methods of Natural Family Planning. She is a board member of Natural Womanhood, an organization that helps women understand and appreciate their fertility.

Watch this episode to learn the negative, sometimes life-threatening, effects hormonal contraception has on a woman’s body, as well as the safer, more effective natural alternatives. Frighteningly, she points out that doctors do not reveal the risks and side-effects of contraception to their patients. This means, women are unable to give informed consent to the damage they are likely doing to their bodies.

Watch and learn from Jackie Aguilar on the Dr. J Show.