GLAAD Not Happy About Declining Acceptance of LGBT

How the Movement Overplayed Its Hand 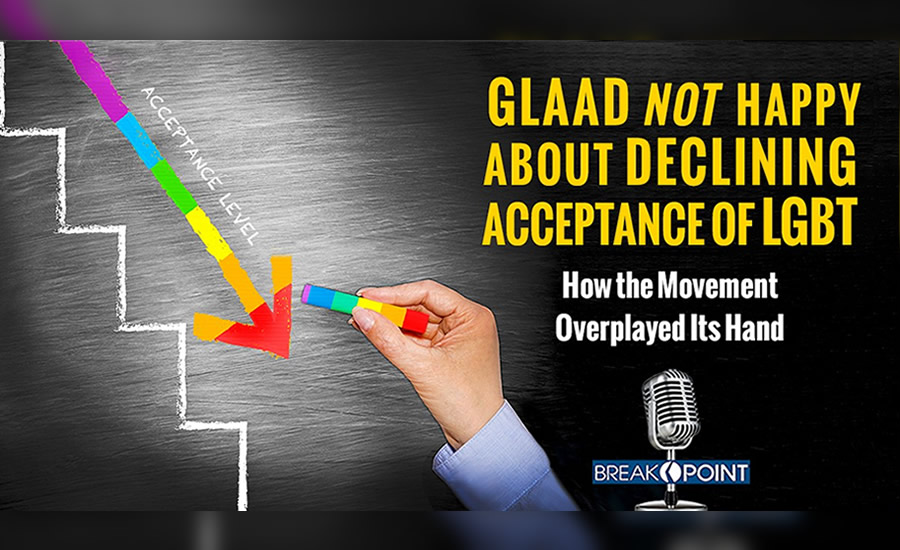 For the past five years, the Gay & Lesbian Alliance Against Defamation, now simply named GLAAD, has conducted a survey of U.S. adults measuring what it calls the “accelerating acceptance” of LGBT people. Up till now, they’ve used these survey results to drive home the “right side of history” narrative that seems so effective for the movement.

The survey asks people to describe how they feel about being around LGBT people, from “very comfortable” to “very uncomfortable,” in seven hypothetical situations, such as having gay people at their place of worship or learning that a family member is transgender, to name just two. As you might expect, until recently, the survey has shown an increased acceptance of LGBT people. But the results for 2018 are in, and GLAAD isn’t happy about them.

While the overall results among all adults “remained stable,” the survey showed that people between the ages of 18 and 34 “are becoming increasingly ‘uncomfortable’ with at least some of the hypotheticals.” If that’s not what you expected from Millennials and “Generation Z,” you’re not alone. As GLAAD’s press release put it, “The younger generation has traditionally been thought of as a beacon of progressive values.”

Though “the idea of ‘equal rights’ is largely supported by Americans,” “legal equality,” said a GLAAD spokesperson, “is not the same as acceptance. … Acceptance cannot be legislated.”

Of course, the question of the hour is, why would younger Americans be increasingly uncomfortable with this movement that is supposed to be historically inevitable? Well I’d suggest, to borrow a phrase, it might have something to do with “overplaying your hand.”

The political, legal and cultural victories of the past decade have led many LGBT activists and allies to believe that the kind of complete “acceptance” GLAAD is after was not only inevitable but imminent. So much so, they became impatient not only with people who overtly disagreed with them, but even with those who were a little ambivalent or expressed a “live and let live” attitude. Their attitude could be summed up in the words of the German poet Goethe: “To tolerate means to insult.”

I can think of at least a few ways in which this intolerance of anything less than full celebration has taken form. One is the consistent bullying by LGBTQ advocates of perceived foes. Young people dislike bullies. And Jack Phillips has been bullied. Barronelle Stutzman has been bullied. Any student who dares open their mouths in support of traditional sexual morality or gender norms, or even questions any extreme of the movement on any “woke” campus knows what it means to be bullied.

Then there’s how much the whole movement has changed since the “T”s and the “Q’s” have joined the acronym and taken it over. I think this is an especially relevant point given that it’s young women who are the most likely to be uncomfortable with LGBTQ situations. I can imagine plenty of young women resisting the unfairness of biological men competing against women in sports, for example, or the appropriation of scholarship dollars and business start-up grants designated for women going to men. And the more this happens, the more uncomfortable young women will be.

And here’s another reason: Back when it was just an LGB movement, we were told that what happens in the privacy of one’s bedroom is no one else’s business. Those days are long gone. Today, “tolerance” means supporting “drag queen story hours” at public libraries for children. And the demands don’t stop there. In a recent article in Medium, an author insisted that anyone who won’t date or sleep with a transgendered person is a “transphobe.”

We often say that “politics is downstream from culture.” In this case, the water flows both ways. Popular culture played a huge role in transforming the way Americans think about LGBT issues, which led to political and legal changes. But now, LGBT politics could be leading some people to rethink how they think about these issues in the first place.

And that makes GLAAD unhappy.

Is President Trump Pro-LGBT? Or Anti?