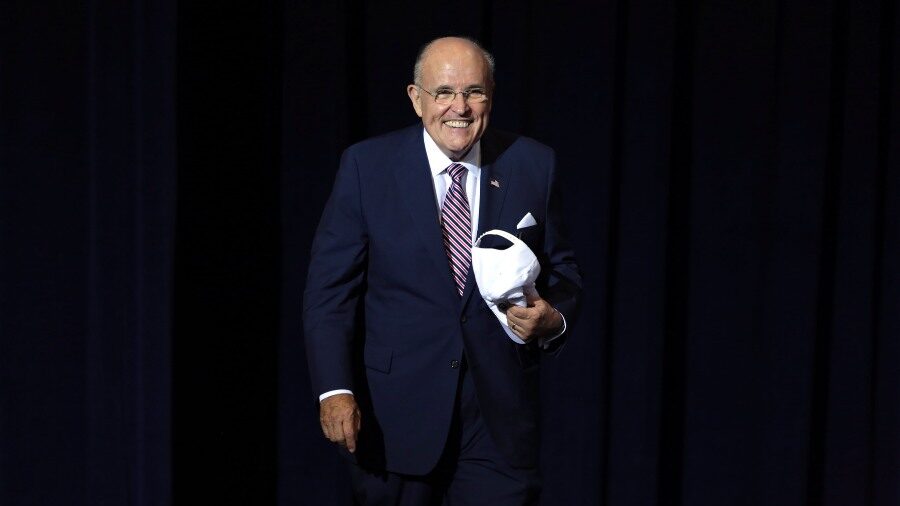 Early reports on the raid at Rudy Giuliani’s residence and the confiscation of all his electronic devices said he’d been warned by the FBI that he’d been targeted by a “Russian intelligence influence operation.” This is not true, and The Washington Post, The New York Times and NBC News have retracted their reports about it.

It’s pretty funny at this point to watch the anti-Trump media all rush to paint any person related to the former President as connected somehow to Russia. It seems they always do it. Apparently it’s the FBI’s M.O., their go-to fake scenario, and I really think it’s time they came up with a new schtick, something less predictable and more imaginative.

Question: If the FBI was truly concerned about Giuliani being targeted by Russians, why didn’t they give him a defensive briefing? The same could be said of then-FBI Director James Comey in his treatment of Trump.

The Washington Post reported this phony story first, but you know how the media act as a herd and just follow along. That seems to be what happened here.

Giuliani tweeted that the WAPO and The New York Times should reveal their sources and called the story defamatory.

In more Giuliani news, Jack Phillips of The Epoch Times reports that during Trump’s impeachment hearings in 2019, the FBI “surveilled chats” between Giuliani and Trump on the iCloud. (Translation: they spied on them.) Giuliani’s attorney, Robert Costello, was told by the US Attorney’s Office in Manhattan that this took place.

Rudy, don’t you get it? To the top tier of the FBI (and some staffers lower down), Trump has no constitutional rights. All the rules are out the window when it comes to him.

As for the raid, “They took documents that are privileged,” Rudy told Tucker Carlson on Friday, “and then they unilaterally decided what they could read and not read.”

“The prosecutors in the Justice Department spied on me,” he said. “These are tactics only known in a dictatorship — where you seize a lawyer’s records in the middle of his representation.”

In case you don’t know, iCloud is the Apple-based (repeat, Apple-based) system that backs up emails, texts, photos, documents and more.

Speaking of President Trump’s constitutional rights, attorney and law professor Alan Dershowitz has weighed in on the raid on Giuliani’s home, and he says it violates the 4th Amendment.

He explained this just as Giuliani has, saying that this should have been done through subpoena, with a judge, not just a search warrant. A search warrant is issued when officials have reason to believe a subject would destroy evidence if the search were not carried out. But Giuliani had known he was being investigated for many months, so there was no reason to think he would destroy the evidence that he’d had in his possession all this time.

As you know, this warrant covered all communications devices on the premises, but the FBI refused to take three hard drives belonging to Hunter Biden, even when Giuliani offered them. They did not want those, even though the FBI is purportedly investigating Hunter.

As for Giuliani, any prosecution of him will be tainted, Dershowitz said, if agents obtain information that is covered by attorney-client privilege. (And of course they did.) He’s advising Giuliani’s attorneys pro bono and tells them “to move to get the material back, have the government subjected to subpoena analysis, and force anybody who goes over the material to be from outside the prosecutor’s office, such as a judge.”

I would think that horse is probably out of the barn and the door flapping in the wind.

This is Banana Republic Territory

Miranda Devine of the New York Post has a great, no-holds-barred opinion piece on what’s being done to Rudy. This trampling of his rights is especially egregious because he and his client, the President, were actively spied on — in total disregard of either executive privilege or attorney-client privilege. And it sure appears that confiscating all of Giuliani’s electronics was done to shut him down for daring to look into Hunter Biden’s $83,000-a-month payments from a corrupt Ukrainian energy business while his father was Vice President. As Alan Dershowitz noted, we’re in serious banana republic territory here, folks.

They’ve gone so far, I can’t imagine that the FBI has any credibility left. They have lost all trust. And for those on the left who think it’s just great as long as your enemy is the one targeted, just wait till you’re the one in the crosshairs. Believe me, if they have that kind of power, it’ll happen.

I’ll leave you with Devine’s piece, because it’s a must-read.