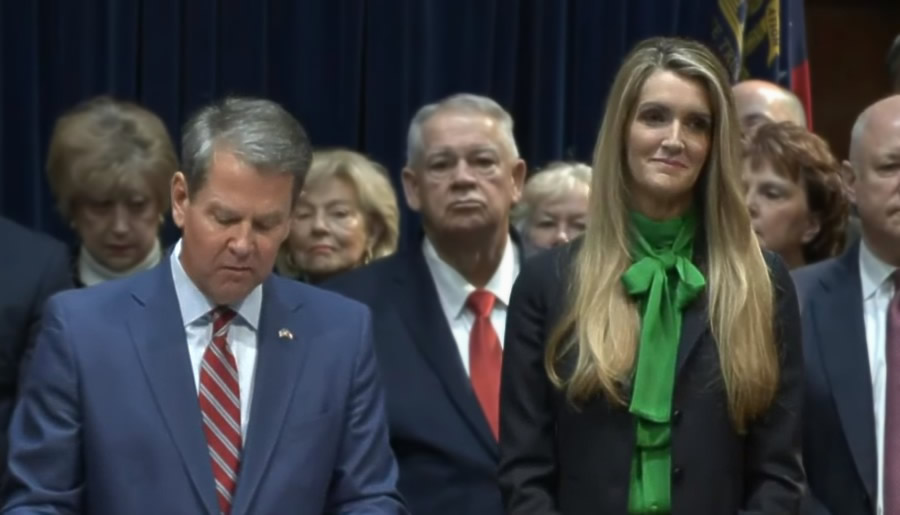 In a televised speech on Wednesday, Georgia GOP Gov. Brian Kemp officially announced financial executive Kelly Loeffler as his pick to be the state’s next U.S. senator.

Kemp — who has mulled over hundreds of applications in the months since Georgia Republican Sen. Johnny Isakson announced he would be stepping down — officially unveiled Loeffler as his choice on Wednesday. In a speech at the Georgia State Capitol, the governor said Loeffler would serve in the Senate as a steadfast conservative who would support the Trump agenda.

“Kelly Loeffler will stand with our president, Senator Perdue, and their allies in the House and Senate to keep America great,” Kemp said, invoking the president’s re-election slogan. “She will end this impeachment circus in Washington, and get Congress back to working for the people of our country.”

Despite Loeffler holding no prior political experience, Kemp chose her because he is betting that she will help bring female voters back into the Georgia GOP fold. Additionally, Loeffler’s strong business background was viewed as an advantage, allowing her to self-fund ahead of what will likely be a tough 2020 election cycle in the state.

Speaking for the first time as a senator-designate, Loeffler made clear her conservative bona fides.

“I’m not a career politician, or even someone who’s run for office. I’ve spent the last 25 years building businesses, taking risks, and creating jobs. I haven’t spent my life trying to get to Washington,” Loeffler said. “I’m a life-long conservative, pro-Second Amendment, pro-Trump, pro-military, and pro-wall,” she went on, which earned applause from the crowd gathered around her.

“I make no apologies for my conservative values, and I look forward to supporting President Trump’s conservative judges,” she said, adding that she is “strongly pro-life” and voiced explicit support for South Carolina Sen. Lindsey Graham’s 21-week abortion ban.

Loeffler is mostly known for being the co-owner of Georgia’s WNBA team, the Atlanta Dream. She also serves as the chief executive of Bakkt, a subsidiary of the Georgia-based Intercontinental Exchange Inc. Loeffler is married to the Intercontinental Exchange’s founder and CEO, Jeff Sprecher, and together, the couple has made considerable donations to the Republican National Committee in recent time.

However, she will likely need to keep proving her conservative credentials in the run-up to 2020 elections, where voters will decide if she can finish the remainder of Isakson’s term. The days leading up to her appointment have been marked with Republican infighting, as some party hardliners believe she is not conservative enough for the seat.

Media personalities like Sean Hannity and lawmakers like Florida GOP Rep. Matt Gaetz heavily pressured Kemp to shy away from Loeffler and to pick Georgia Rep. Doug Collins instead. Gaetz went so far as to threaten Kemp with a primary challenger if he chose the businesswoman. Those efforts were not successful in changing the governor’s mind in the end.

Collins, for his part, has not ruled out a 2020 campaign for the Senate seat. He said he will make a decision sometime after Kemp’s announcement.

As for national Republicans, they appear to be coalescing around Kemp’s choice.

“Everybody knows that a generational leader like Johnny Isakson is irreplaceable, but Ms. Loeffler has an impressive record in business and community leadership. I am confident she is well prepared to continue Sen. Isakson’s historic legacy of advocating for veterans, strengthening our national defense, and fighting for middle-class families,” Senate Majority Leader Mitch McConnell said Wednesday, adding that she has his “full support” for her 2020 election.

Isakson, who is suffering from Parkinson’s disease, announced in August that he would be stepping down at the end of the year.