The Father of Our Country was born this day in 1732. 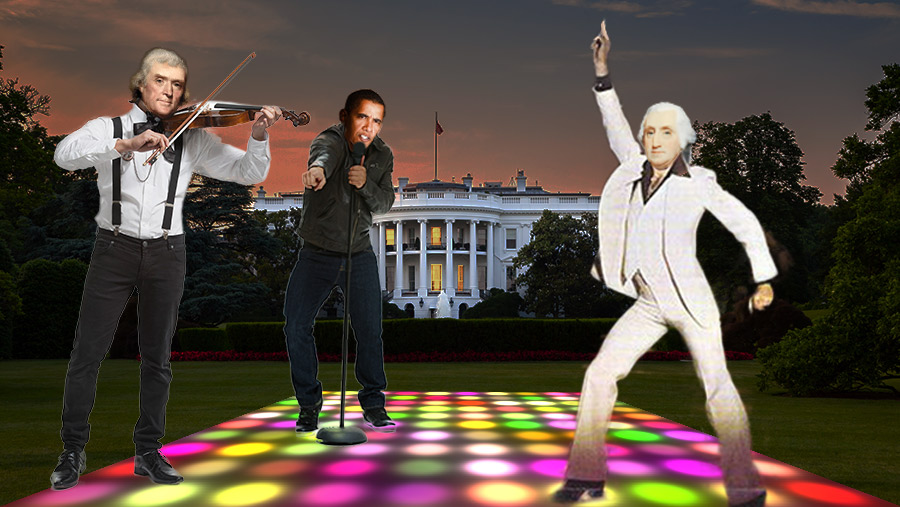 Note: This was originally published on President’s Day, 2017, shortly after Donald Trump was inaugurated. On our first president’s birthday, and with a new occupant in the Oval Office, we thought it’d be a good time to re-post. A good and entertaining reminder that we have to remember to see our leaders as fellow humans first.

Yes, the Father of Our Nation, the firm-faced visage on our money and Mount Rushmore, loved to swirl and twirl and cut the rug. In fact, Washington was so eager to shake his groove thing that the large table in his formal dining room at Mount Vernon was placed on saw horses to more quickly transform the evening’s dining into dancing.

Music, he said, was “the favorite passion of my soul.” Even when a wrist injury and old age made playing impossible, his love never wavered. His granddaughter recalled listening to our Founding Father “humming old tunes, generally Scotch songs, but sometimes Italian airs and hymns.”

Barack Obama loves to sing too.

One of the most memorable moments of his presidency came in 2012 when Obama broke out a mean impersonation of soul great Al Green. No easy feat. Obama’s brief rendition of “Let’s Stay Together” went viral.

In the years since leaving the White House, W has become a bona fide artist. In fact, on February 28, he releases a book of his artwork called Portraits of Courage: A Commander-in-Chief’s Tribute to America’s Warriors.

Fortunately, in his day we didn’t have smartphone cameras and YouTube.

Presidents are People Too

I mention all this on President’s Day to make a point: Presidents are people too.

It is so easy to turn our Presidents into two-dimensional targets of hateful derision or, for that matter, unhealthy adulation.

Listen to how former Saturday Night Live writer Jim Downey explained why SNL had trouble writing jokes about Obama. “It’s like being a rock climber looking up at a thousand-foot-high face of solid obsidian, polished and oiled,” Downey says in the book Live from New York. “There’s not a single thing to grab onto — certainly not a flaw or hook that you can caricature.”

As someone who wrote comedy professionally for 20 years, I can promise such an attitude is born of either incompetence or reverence. My money here is on reverence. “Certainly” no “flaw or hook”? None at all? Who is served by treating a president like a god?

Contrast that attitude with SNL‘s treatment of Donald Trump, which has been relentless, vicious, demeaning and deceitful. One writer even went after Trump’s 10-year-old son Barron. They attacked his kid! Why? You only do that when you forget you are dealing with flesh-and-blood. Or don’t care.

I don’t want to single out SNL. They are symbolic of what we see throughout social media when it comes to Trump. He’s Hitler reincarnated, he’s a mentally-deranged Godzilla hellbent on destruction. He’s an evil so dark and demonic that the mere presence of objects bearing his name must be exorcised from all stores. It’s literally dehumanizing.

Trump’s a Person Too. Really.

Want to know the truth? Donald Trump is just a guy. He’s a New York construction guy. A builder by trade. A guy who sees America as a beautiful crumbling structure that he wants to restore, and busted tail to get himself hired for the gig. Nothing more. Certainly a man with flaws and hooks worthy of caricature, and even some concern. But just a guy, like the 43 different people who came before him.

No more loud, brash and thin-skinned than Teddy Roosevelt. No more rich than Franklin Roosevelt. No more egotistical than Lyndon Johnson. No more colorful a personal life than Grover Cleveland. Less cranky with the press than Harry S Truman.

Yeah, he owns a winery in Virginia. Why? Because about 250 years ago, on a “little mountain” a couple miles away, Thomas Jefferson wanted to demonstrate that America could cultivate its own wine industry. (He failed at Monticello, but others in Charlottesville would succeed.)

Yeah, he was a reality TV star. And Ronald Reagan hosted TV shows and made a movie with a chimp.

Yeah, he’s far from perfect and needs our prayers. Who doesn’t?

This ain’t about Trump. I suspect I’d be writing something similar if Hillary Clinton had been elected. And not from any high horse. If there’s anything I learned over the years — years mostly spent poking fun at Presidents on both sides of the aisle — when we lose sight of their humanity, when we forget our slings and arrows hit real flesh-and-bone, it’s our life that ends up suffering.

Forgetting the humanity of others is the quickest way to lose our own.

So, this President’s Day let’s toast all 45 Presidents, even the ones whose politics make us nauseous. Even the 19th century ones nobody ever talks about. (I’ve got nothing but love for you, Benjamin Harrison, Zachary Taylor, Rutherford B. Hayes … and the so-obscure-you’re-now-famous-for-being-obscure Millard Fillmore.)

Let’s celebrate that in America, our national leader is not just heading a government “of the people, by the people and for the people,” but himself comes “from the people.”

And as noted crooner Barack Obama once sang, “Let’s Stay Together.”