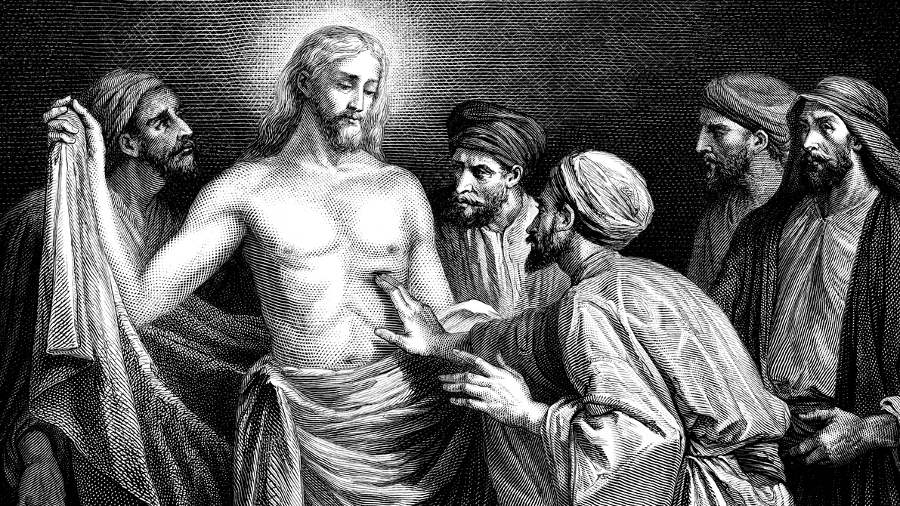 In elementary school, little groups of friends form. They have their own special secrets and ways. Maybe you were part of one of those groups. Maybe you weren’t. If you were, then you felt more confident and shared in all the group did. You shared the same interests, played the same sports, were in the same classes, wore the same brands. You felt included. You were in the “in” crowd.

Well, I will confess to you that I have never been “in.” I’ve always felt a little left out. It’s not a good feeling. I’ve seen a friend’s refrigerator dotted with invitations I did not receive and found out friends gathered and I was not included. I have described this as “always on the outside looking in.”

John, the very close friend of Jesus, must have had a tender heart, for he tells a story of intense intimacy in John 20. It is the story of Thomas. I invite you to see it with fresh eyes, thinking about your own friendship with Jesus and the closeness you’d like to experience with Him.

The Odd Man Out

“On the outside looking in” was probably an unusual feeling for the disciple Thomas. He was a twin, so he’d always had someone with whom he felt a strong bond. Thomas said he was willing to die with Jesus. He was the one who asked Jesus, “Lord, we do not know where You are going, how do we know the way?” And Jesus gave that great statement in response: “I am the way, and the truth, and the life; no one comes to the Father but through Me” (John 14:5-6). But now Thomas was in the room with the other disciples as they were excitedly talking about having seen the risen Jesus.

It was hard to take in. Was it really true? Could it be true? He had his doubts. He hadn’t been with the other disciples when they found the empty tomb or when Jesus had physically revealed Himself to them after the resurrection. Now he was hearing it all secondhand, and it was just too much to believe. Too good to believe. He wanted to believe his friends but could not. He told the others, “Unless I see in His hands the imprint of the nails, and put my ﬁnger into the place of the nails, and put my hand into His side, I will not believe” (John 20:25). He wanted proof.

That must have put him on the outs with the other disciples. I can just hear them arguing with him. “But, Thomas, it really was Him. Don’t you believe us?” And Thomas would reply, “Not until I see with my own eyes.” Round and round it went — for eight days! Thomas wanted substantial evidence. He was alone in his thinking and doubts — the others believed and were excited. He was also the odd man out in not having experienced the incredible meeting with Jesus. That, too, must have felt isolating. How come everyone else got to see Jesus and he didn’t? He must have wondered. Did the other disciples begin to treat him differently? Make him feel like he was not a part of them anymore?

They gathered together again, and this time Thomas was with them. The doors were closed and probably locked. Were they still afraid of the Roman guards? All of a sudden there was Jesus, standing in the middle of them. He hadn’t knocked or opened the door — He just appeared!

I would love to know the expression on Thomas’s face. Awe? Fear? Relief? Tears?

Jesus did none of those things. In fact, He asked Thomas to come closer. Jesus then invited Thomas to reach with his ﬁngers into the scars on His hands. Can you imagine Thomas’s feelings at that moment? Jesus knew exactly what he had told the other disciples. Of all the things the risen Lord might have had on His mind, He was focused on Thomas and his doubts. Did Thomas reach hesitantly? Did he touch oh so gently? Then Jesus spoke to him again. I imagine His eyes were locked on Thomas’s and that Thomas’s eyes were full of tears. “Reach here your hand and put it into My side,” He said (v. 27).

Jesus must have opened His robe to reveal His wound. Such a tender moment.

An Invitation to “Come”

There was no condemnation for Thomas’s doubt. He was an honest doubter. He didn’t doubt to keep Jesus out but rather asked his questions because he wanted to know Jesus more fully. And Jesus gave him full access to His person. Jesus told him, “Do not be unbelieving, but believing” (v. 27).

Thomas was overwhelmed and said, “My Lord and my God!” (v. 28). All his doubts vanished. He knew he was in the presence of Jesus.

In the presence of Jesus may all of your doubts and all of mine vanish as well. May our sense of distance from Him vanish. May we more fully know intimacy with Him.

Ruth Graham joins James and Betty Robison this Tuesday on LIFE TODAY. This is an excerpt from Transforming Loneliness by Ruth Graham. Copyright ©2021 by Ruth Graham. Published by Baker Books, a division of Baker Publishing Group. Used by permission.