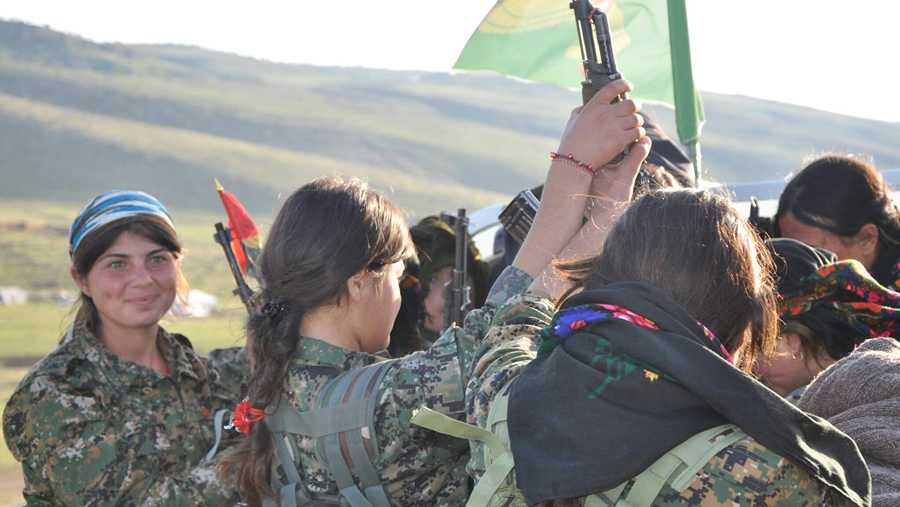 Female Yazidi resistance fighters of the YJÊ, September 2015 near Sinjar. There is no indication from the image source that any of these women pictured were former sex slaves.

More Yazidi women who escaped sex slavery under ISIS are now preparing to launch a major assault on the terror group as revenge for the slaughter of their friends and families.

The “Force of the Sun Ladies” is comprised of 123 Yazidi women between the ages of 17 and 37. After the siege on Mount Sinjar in August 2014, ISIS militants captured many of the women and sold into sexual slavery, Fox News reports.

There are 500 more Yazidi women just waiting for training before they can join the burgeoning force, which already engages ISIS daily.

Motivation to take on ISIS is high, as militants have targeted Yazidis for genocide. In total, ISIS captured 2,000 women at Mount Sinjar. The only reason militants didn’t capture more is because many of the women threw themselves and their children off the mountaintop, preferring death to a life under ISIS’ fist.

Due to airstrikes, ISIS was not able to fully finish its siege of the mountain, but it managed to butcher a good portion of the men as well as conscript the young boys into their ranks.

“Our elite force is a model for other women in the region,” Khider told Fox News. “We want to thank all the other countries who help us in this difficult time, we want everyone to take up weapons and know how to protect themselves from the evil.”

The unit has fought ISIS since at least Nov. 13 and is now preparing for an incredibly arduous task: the recapture of Mosul, which is the second largest city in Iraq and home to major ISIS operations. ISIS has held the city since June 2014.

Iraq is already deploying thousands of troops, who are just waiting for the final word to begin the assault on Mosul. The general strategy is to cut off supply routes to the city, as ISIS does not have the capability to deliver support via the air. But the main operation is not likely to take place before the end of 2016.

Back in December, Iraq’s Finance Minister Hoshiyar Zebari told Reuters that the recapture of Mosul would spell an end to ISIS’ work in Iraq. He also added that support from the Kurds is absolutely necessary for the operation’s success.

“Peshmerga is a major force; you cannot do Mosul without Peshmerga,” Zebari told Reuters.