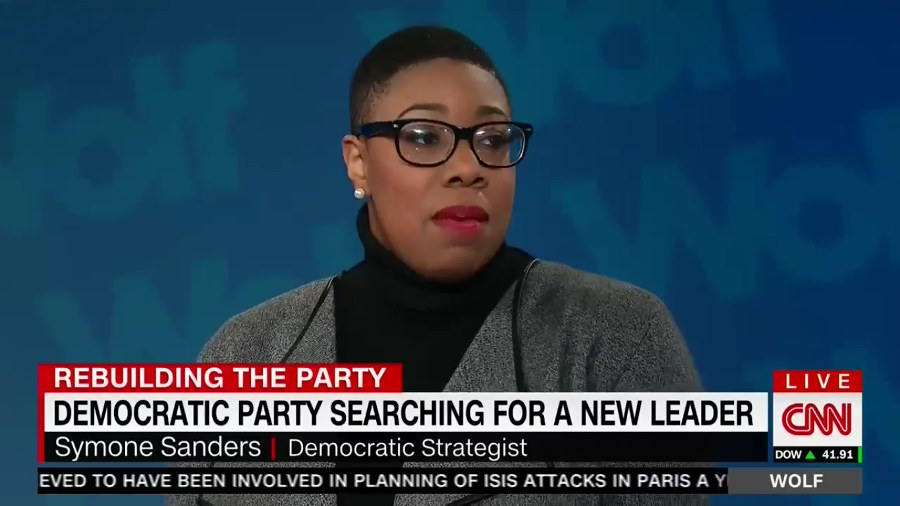 In this Nov. 23, 2016 screengrab from video, Symone Sanders speaks on a CNN discussion panel.

A former spokeswoman for Vermont Sen. Bernie Sanders’ presidential campaign says the Democratic Party should choose Rep. Keith Ellison of Minnesota as the new head of the Democratic National Committee (DNC), primarily because he isn’t white and “we don’t need white people” leading the party.

Symone Sanders (no familial relationship to the senator) was making an appearance on a CNN discussion panel Wednesday when the conversation turned to whether former Vermont Gov. Howard Dean should once again become chairman of the DNC. Sanders was opposed, and cited Dean’s race as a reason why.

“In my opinion, we don’t need white people leading the Democratic Party right now,” she said. “The Democratic Party is diverse, and it should be reflected as so in our leadership and throughout the staff at the highest levels from the vice chairs to the secretaries all the way down to the people working in the offices at the DNC.”

Dean’s chief opponent right now to lead the DNC is Ellison, who is black.

Sanders also criticized Dean for the attitude he took towards Bernie Sanders and his supporters during the Democratic primary, urging them to fall in line behind former Secretary of State Hillary Clinton.