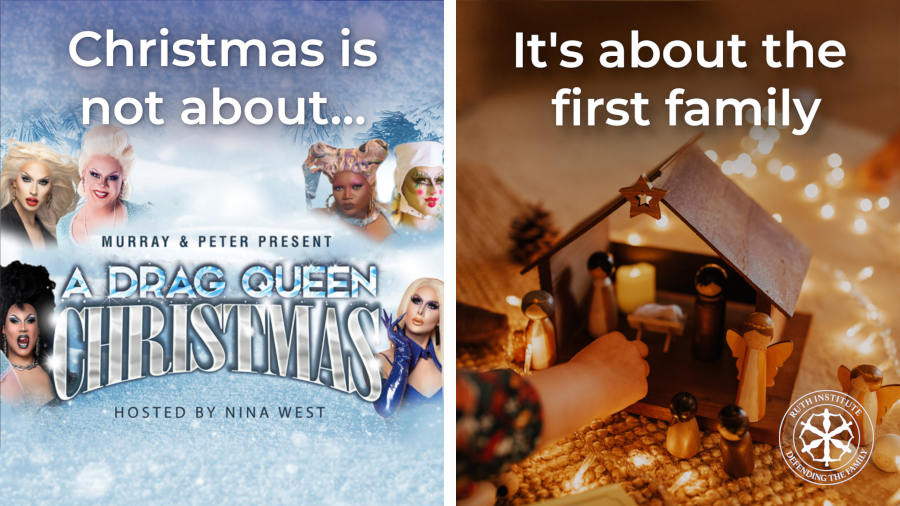 “Florida is in the forefront of protecting children from a toxic culture,” said Ruth Institute President Dr. Jennifer Roback Morse, Ph.D. “The state’s licensing board is investigating facilities that hosted a ‘Drag Queen Christmas’ with children in the audience.”

The show, which toured the country, was highly sexualized and included simulated sex acts and performers exposing body parts, real and prosthetic.

Morse noted: “In a sketch called ‘Screwdolph the Red-Nippled Reindeer,’ a male performer with artificial breasts asked a child in the audience, ‘Are you reaching for my [breasts]? Are you hungry?’”

A spokesman for Gov. Ron DeSantis explained: “Exposing children to sexually explicit activity is a crime in Florida, and such action violates the Department’s licensing standards for operating a business and holding a liquor license.”

Morse responded: “But that’s the whole point of events like Drag Queen Story Hour — held in libraries across the country with the blessing of the American Library Association — to corrupt innocent children.”

“The Sexual Revolution relentlessly tries to replace the values children learn from their parents with a radical sexual ideology.”

“Like Marxists, these activists understand the importance of early indoctrination. Lenin is reported to have said: ‘Give me four years to teach the children, and the seed I have sown will never be uprooted.’ The gender activists use schools, libraries, TV, and the internet to flood the culture with their perverse views. Now, they have stooped to corrupting the words of popular Christmas songs.”

“Gov. DeSantis is to be congratulated for taking threats to children seriously,” Morse said. “Other elected officials should follow his lead.”

Why Are Abortion Advocates So Angry?

This week’s Dr. J Show features Alexandra DeSanctis, a fellow at the Ethics and Public Policy Center and co-author with Ryan T. Anderson of the new book Tearing Us Apart: How Abortion Harms Everything and Solves Nothing.

As to why abortion advocates are so angry, DeSanctis says:

Probably a lot of it comes from having had abortions themselves… These women have participated in an act that takes the life of their own child. I can’t imagine that that doesn’t take a significant toll on a person and that that might manifest in a lot of guilt, sadness, and suffering that then comes out in anger towards people who are reminding them of the truth of what happened.

A lot of women feel the need to have an abortion because our culture tells them to remain childless to get ahead professionally, DeSanctis explains. That’s why big businesses love abortion. They “virtue signal” by offering “destination abortions” for women who live in places where abortion is illegal, but there’s a deeper reason: it’s better for them if their female employees are always available to work.

DeSanctis and Anderson’s book, Tearing Us Apart, “is a roadmap for pro-lifers in the wake of Roe v. Wade… Pro-lifers need the best resources, the best references, the most comprehensive case against abortion to make as we go into this fight. The end of Roe was not the end of the fight over abortion. It was the beginning of a new phase of the fight.”

COMMENTARY: While his handling of clergy sexual abuse and his unprecedented resignation from the papacy give rise to legitimate criticisms, on balance he made a positive contribution in both cases.

Two themes dominate the assessment of Cardinal Joseph Ratzinger, Pope Benedict XVI’s life and pontificate: first, his handling of clergy sex abuse in the Catholic Church and, second, his resignation. As to the first point, I, too, wish he had done more to combat clergy sexual abuse inside the Catholic Church. However, I am hard-pressed to name anyone of his stature who has done more than he did.

As to his resignation, far too many leaders grasp and abuse power, in all the major authority structures of society, literally left and right. Around the world, inside and outside the Church, people use the power of their offices to enrich themselves, promote their agendas and cover their crimes. In this worldwide cesspool of corruption, Benedict XVI walked away from the most powerful office on earth, the office of the Vicar of Christ. As painful as his resignation has been, we can, if we will, see the hand of God at work. Benedict’s resignation set in motion a series of events whose end is not fully known. I believe we have reason to be hopeful that the ultimate result will be constructive.

His work on clergy sexual abuse predates his election to the papacy. According to a New York Times report upon his accession to the papacy in 2005, Cardinal Ratzinger had made a weekly practice of reading through dossiers on accused priests, a practice he referred to as “our Friday penance.”

An Associated Press review of Vatican records in 2014 dates Ratzinger’s procedural improvements to 2001, stating that they show a “remarkable evolution in the Holy See’s in-house procedures to discipline pedophiles.” The AP continued, “Then-Cardinal Joseph Ratzinger took action after determining that bishops around the world weren’t following church law to put accused clerics on trial in church tribunals.”

Between 2011 and 2012 alone, Pope Benedict laicized nearly 400 priests. By one estimate, he was responsible for the laicization of more than 800 priests between 2004 and 2014, and he disciplined many more. Benedict was the person who finally sanctioned the heinous Marcial Maciel, the founder of the Legionaries of Christ.

During his many trips around the world, he met with numerous victims, one of whom was Faith Hakesley, who was raped by her parish priest as a teenager. Her meeting with Benedict was deeply meaningful for her and continues to bear spiritual fruit. She currently writes the “Ask a Survivor” column for the Ruth Institute.

How Pope Benedict XVI Taught Me To Hope After Sexual Abuse

By Faith Hakesley for Our Sunday Visitor:

There have been many times over the course of my life when I have been on the brink of despair. I suffered months of sexual abuse at the hands of a trusted parish priest when I was 15 years old, lost my oldest brother unexpectedly due to a heart condition a year later, and have endured numerous health scares including cancer and a heart condition that nearly took my life. There have been many times when my faith has been very weak and, as a result, hope has been difficult to hold on to. That changed in April 2008 when, along with four other victims of clergy abuse from the Archdiocese of Boston, I was given the life-changing opportunity to meet with Pope Benedict XVI during his apostolic trip to the United States.

At the time of this meeting, five years had passed since a criminal trial had put my rapist behind bars. I had made leaps and bounds on my healing journey, but I was still struggling in more ways than one. A piece of advice from my mother had kept me going since a time of particular struggle and uncertainty before the trial. She encouraged me to look for God’s “glimmers of grace.” These are his little gifts to us that bring us joy, reassure us of his love and lead us to hope. Sometimes, God sends certain individuals into our lives to be glimmers of grace; for me, Pope Benedict XVI became one such glimmer.

I listened intently to Pope Benedict’s homily at a packed Washington Nationals Stadium in Washington, D.C., on April 17, 2008. He spoke of the sex abuse scandal and of hope, love, forgiveness and of keeping God’s children safe. He asked Catholics to love their priests and to affirm them, and he encouraged all to pray to the Holy Spirit for guidance and conversion.

At that point in time, I had still not forgiven my rapist, and in that moment, I felt as though the Holy Father was speaking directly to me. Perhaps his words were not what I wanted to hear, but they were what I needed to hear. The closing words of his homily particularly struck me:

Those who have hope must live different lives! By your prayers, by the witness of your faith, by the fruitfulness of your charity, may you point the way toward that vast horizon of hope which God is even now opening up to his Church, and indeed to all humanity: the vision of a world reconciled and renewed in Christ Jesus, our Savior.