Florida Gov. DeSantis Says ‘No Substitute for Courage’ in Fight Against Woke Institutions 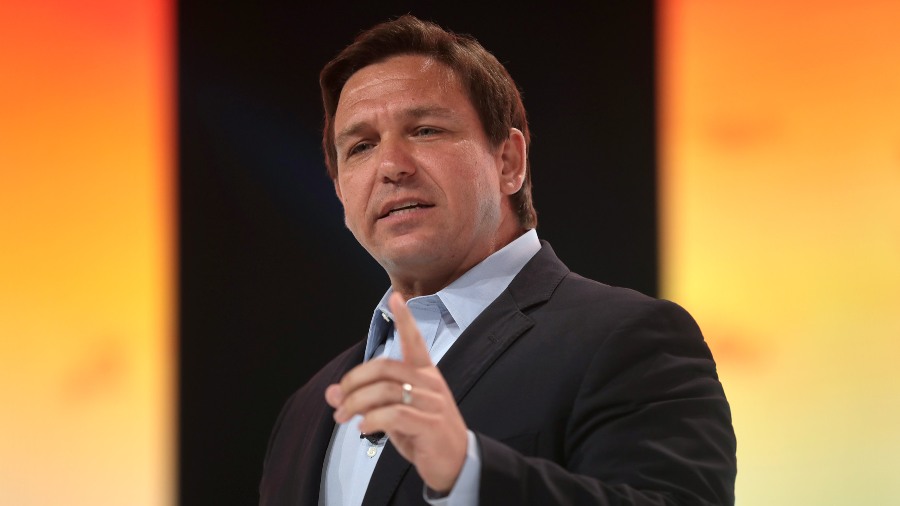 This will be the year that America “fought back” against wokeness and authoritarianism, in the words of Florida Gov. Ron DeSantis.

In a speech, which he delivered Thursday at the Conservative Political Action Conference in Florida, DeSantis explained how he has helped transform Florida into a bastion of freedom against growing authoritarianism. He also explained how one of the primary issues of our time is the transformation of institutions into engines of left-wing cultural indoctrination and control.

DeSantis began his speech by saying that in 2021, Florida set a record for domestic tourism in the United States. He said that he thinks the reason so many people are coming to Florida, including “lockdown” politicians and celebrities, is that Florida didn’t pursue a path of extreme lockdown.

“We refused to let this state descend into some type of Fauci-an dystopia where people’s freedoms are curtailed and their livelihoods are destroyed,” DeSantis said, referring to Dr. Anthony Fauci, who serves as the chief medical director to President Joe Biden.

DeSantis said Florida was a leader in rejecting the “biomedical security state” that erodes freedom, as well as nongovernmental policies, like vaccine passports, because it’s “unacceptable to subcontract out Fauci-ism to big companies.”

If Florida had not led in this way, DeSantis said, the United States could have looked more “like Canada or Australia.”

To illustrate what he meant about the biomedical security state, DeSantis referred to President Dwight Eisenhower’s farewell address. Most Americans remember that Eisenhower talked about the “military-industrial complex” in that speech, but DeSantis said it is also important to heed Eisenhower’s warnings about a rising “scientific and technological elite.”

The connection between government funding and scientific and technological research could lead to public policy being “held captive” by this elite.

The statesman’s job, according to Eisenhower, is to not just follow the dictates of this elite, but to assess the interests of all society to pursue the common good.

Politicians in the last few years have too often deferred to health bureaucrats because it was “a safe thing to do politically,” DeSantis said. They could simply blame bad outcomes on the advice of medical bureaucrats.

DeSantis then explained how Florida has drawn criticism from President Joe Biden because it has been willing to stand up and oppose his policies.

This includes opposing the vaccine mandate, suing the administration over its border “catch and release” policies, the “weak on crime policies,” and the “reckless” spending that has triggered inflation, according to DeSantis.

“The inflation is because of his policies and we’re not going to let anyone forget that,” he said.

The Florida governor said the Biden presidency has had the worst first year of any president “since the 1800s.”

DeSantis then explained the policies he’s pursued in Florida.

He listed putting more “conservative” justices on the Florida state Supreme Court and turning it from one of the most liberal in the country to the most conservative. He said Florida “banned” sanctuary cities, remained a leader in school choice that has “liberated” hundreds of thousands of children so they may get a good education, and protected women’s sports from being destroyed.

DeSantis said his was the first big state to legislate against “Big Tech censorship, because they want to silence us, they want to deplatform us, and we cannot have a free society if most of the speech in this country is controlled by a handful of left-wing oligarchs in Silicon Valley.”

Florida took a different path compared to places “like Portland,” DeSantis said, and passed laws that would punish people who engage in lawless mob violence.

“In Florida, you’re not getting a slap on the wrist, you are getting the inside of a jail cell,” DeSantis said.

“Because we will not spend taxpayer money to teach our kids to hate our country or to hate each other, we have banned [critical race theory] in K-12 education,” DeSantis said. “And instead, we have the most robust civics education anywhere in the country. We’re going to have citizenship exams for graduating seniors and we’re giving teachers the opportunity to go through a civics boot camp and get a $3,000 bonus.”

He said it wasn’t enough to just be against critical race theory.

“I’m for the Constitution, I’m for the Bill of Rights, and we need to have our young people understand what that means,” DeSantis said.

In closing out his speech, DeSantis explained the threats to freedom in America that he said have grown since he entered politics a decade ago. He said that when Biden took office, it was only a few votes in the Senate that prevented ideas like packing the Supreme Court, making the District of Columbia a state, federalizing “fraudulent ballot practices,” and abolishing the Electoral College from becoming a reality.

This wasn’t what the average American really wanted, DeSantis said, but it was a part of the left’s desire to “marginalize” the conservative half of the country so that it becomes powerless and voiceless.

DeSantis called wokeness the new religion of the left and a “form of cultural Marxism” intended to divide the country and give the left power.

“That’s why they remove statues of Thomas Jefferson, and Abraham Lincoln, and Teddy Roosevelt, take George Washington’s name off schools, because they want to erase that history, they want to delegitimize our founding institutions, and they want to replace that with their left-wing ideology as the foundational principles of our modern day society,” DeSantis said.

He then said the problem conservatives face is that “a lot of major institutions in our country have become infected with this woke virus.”

He pointed to higher education, which now works to indoctrinate young people with the woke ideology. He pointed to corporate America engaging in woke activism, while pandering to and working with Communist China. He pointed to government bureaucracies, which have become “off the rails” in many different agencies. And finally, he pointed to the “dishonest” legacy media that is now in the business of “spinning partisan narratives” instead of telling the truth.

To “top it off,” he continued, Big Tech has become the “No. 1 institution for censorship” that works alongside the legacy media and the Biden administration to silence conservatives.

In these times, where freedom is being threatened from so many sides, DeSantis said there “is no substitute for courage.”