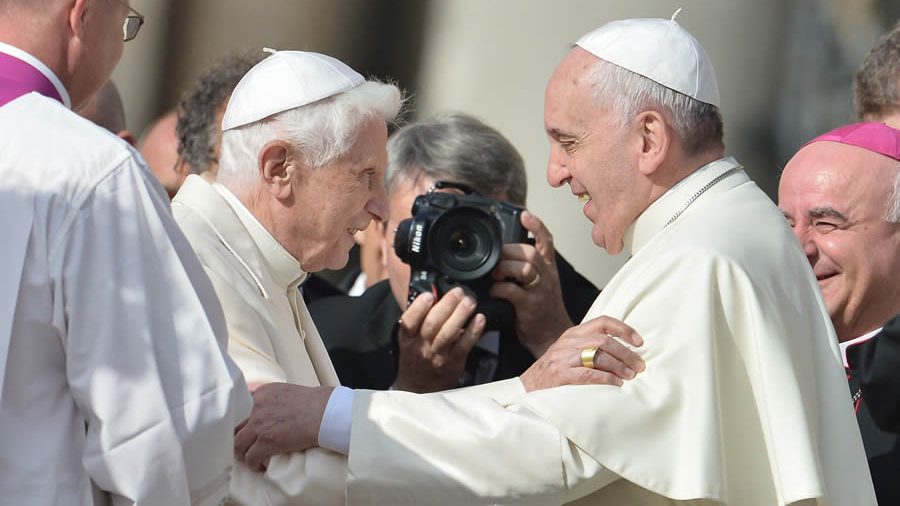 Pope emeritus Benedict XVI (L) is welcomed by Pope Francis as he arrives to attend a papal mass for elderly people at St Peter's square on September 28, 2014 at the Vatican.

An unforced error from a Vatican communications office the other day drove me a little something like crazy. The nature of the unforced error is that it is wholly unnecessary and ridiculously distracting. And so it was.

As the fifth anniversary of Pope Francis’ election as pope was approaching, a strong statement from the pope emeritus, Benedict, was released, emphasizing the continuity between the two of them and the importance of their diverse experiences and views. I described it as “bizarrely emphatic” to a friend of mine, not because its contents struck me as a surprise, but because it seemed to be missing context.

It wasn’t a purposeful message of praise from B16, but text cut from a letter written to the Vatican publishing company explaining how he could not write an endorsement for an 11-volume set on the theology of Pope Francis because he had other commitments. The Vatican office that released the message included only part of the letter in the release; it took days for an Associated Press news story to expose that the letter had been doctored to omit sentences that tempered Benedict’s praise of Francis.

All this obscures the things that Pope Francis has done in his five years in office, and the squandering of a major opportunity to reflect upon them. His unconventional style and candid statements make people take a second look at Christianity, at God Himself. Watching him at Masses, we see a man at prayer, a man who strives every day to know God, and who wants others to experience the joy of doing so themselves.

Three images have haunted me in recent days, and to me they emphasize how we cannot let ourselves get distracted from the meaning of the pope’s mission, which has to do with things he repeats again and again: the importance of mercy and the necessity of going to the peripheries to encounter people with love. The first image is of a man named Dexter, whom I encountered on Lexington Avenue the other night. He asked for money for a place to stay and food. He was outside a deli, so I did the obvious thing, asked him if he wanted me to buy him a sandwich or something. He did, and I made a contribution to the place he said he was headed to. He called me an angel. I’m nothing of the sort. I could have done more, frankly, and probably should have. But something is not nothing. We make the perfect the enemy of the good time and again. Encounter people with love. It’s a start. It’s better than looking past someone or keeping one’s eyes on the sidewalk.

The other two images are of a married couple I’m aware of who are adopting a child from across the country and the birth mother of the unborn baby, who has more than her fair share of problems, as is often the case in such situations. The couple has a heart not just for the child, but the mother as well, and is scrambling financially to help both. The couple is connected to many resources and still it is extremely difficult. It seems like it shouldn’t be so hard to help a heroic mother with housing and other basic needs and life skills. And yet it is.

My point is: Pope Francis often talks about weeping in solidarity with the pain of others. This is why. There is an urgency about being serious about the business of Christianity, about religion on the frontlines of love, meeting the truth of human needs. That’s not commentary; that’s not polemics; it’s lived theology, where it truly starts to become comprehensible to people. And we should beware what distracts from that. That’s the message of five years of Francis, unforced errors and all.