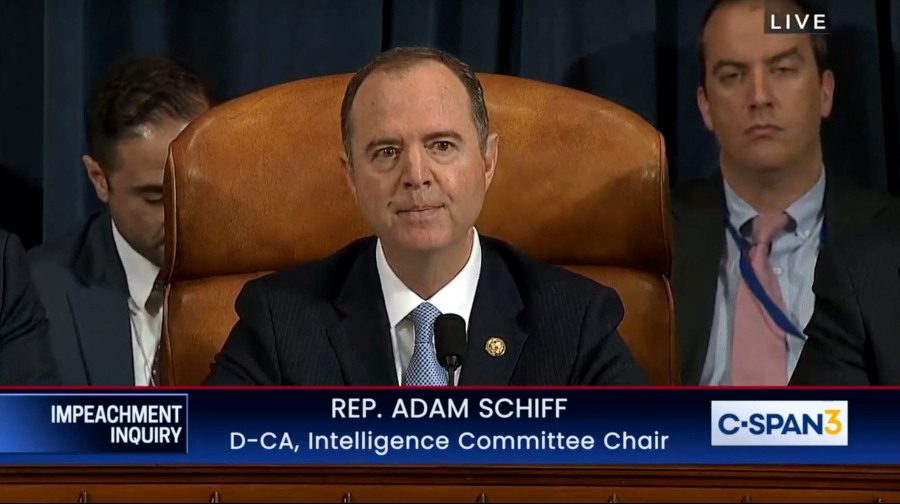 The first public installment of the “Impeach Trump 2019” spectacle took place on Wednesday, and this is not like the impeachment hearings of old. It’s completely partisan, rigidly controlled by House Intelligence Committee Chairman Adam Schiff.

To construct a false narrative, Schiff, in a painfully obvious contortion, makes sure that only certain aspects of this complex story are acknowledged to exist. In fact, that’s why the committee had to come back later, after dismissing the witnesses and cameras: to consider a motion to subpoena the “anonymous whistleblower.” (Who, as we’ve noted, isn’t a whistleblower under federal law but known Democrat operative/spy Eric Ciaramella, spelled C-I-A-R-A-M-E-L-L-A, pronounced “CHAR-a-mel-ah, as in “CHAR-lie”). That motion was, not surprisingly, tabled, by party-line vote. Aw, too bad we didn’t get to find out his (“or her”) name.

Anyone with a few functioning brain cells knows that one reason Schiff can’t allow questions about the whistleblower is that he and his staff would be shown to be lying about their contacts and “collusion” with this very person. We all know who it is! We just can’t talk about him! And, of course, we can’t hear from anyone with whom he’s spoken.

The fact that the very person who is running the impeachment inquiry is the one whose staff first had contact with the person who sparked the impeachment inquiry is like something out of a political thriller. You can’t make this stuff up. (Or, if you can, you really should start writing political thrillers.) Absurdly, Schiff currently maintains he doesn’t know this person’s name. Either he is brazenly lying or he has carefully tiptoed around the name when speaking with his staff, so as to preserve technical deniability on that one point. But he knows.

Tip of the Hat to Rep. Elise Stefanik

We knew Jim Jordan and John Ratcliffe would knock it out of the park on questioning, and they did. But let’s also acknowledge New York Rep. Elise Stefanik for her skillful line of questioning. She has a no-nonsense way of cutting right to the chase.

We should be proud of all the Republicans’ efforts to get the facts out there for the American public. Imagine how much more effective they would have been if they could have asked certain central questions without being silenced by Adam Schiff. It would have been a total take-down.

Of course, that’s why Schiff ran the hearing as he did. If he didn’t, we might have Republican committee members asking about things like this…

What If It Were Obama

As I was listening on Wednesday, I kept thinking, “These false allegations against Trump are being presented as if they were a shocking abuse of power. What if this were President Obama? Wouldn’t this just be seen as his rightful exercise of power? I think we all know that, YES, it would.”

Consider that Obama’s terrible Iran deal was so important to him, he secretly put millions of dollars in cash on a plane and had it flown over, thinking we’d never know. Can you imagine the hysteria if President Trump had even been accused of contemplating doing that? Bribery! Secrecy! Treachery! Back-channel diplomacy! Impeachment!  Yet the very real Obama story just went away.

Hearsay Can You See?

The two “star witnesses” in Wednesday’s testimony had no direct evidence whatsoever of any Trump “quid pro quo” — of course, that won’t matter to Democrats, who just move the goal posts. Jordan easily pointed out that all they had was hearsay and opinion. “Ambassador, you didn’t listen in on the call, did you…?” (No.) “You’ve never talked with Chief of Staff Mulvaney?” (No.) “You’ve never met the President?” (No.) “You had three meetings, again, with Zelensky and it didn’t come up?” (No. “And in two of them they’d never heard about it [withholding aid], as far as I know.”)

None of this would be allowed in a court of law, and for good reason. It would mean a defendant could be almost effortlessly railroaded. “I’ve seen church prayer chains that are easier to understand than this,” Jordan said of the hearsay.

Where did Sondland get it? Oh, he ‘presumed’ there was a quid pro quo, even though the President told him [Sondland] directly, ‘I want nothing; there’s no quid pro quo.’”

The Engine of Truth

“Cross examination is the engine of truth,” Jarrett said, “and we learned today why, because Jordan and Ratcliffe and [Michael] Turner eviscerated this chattering class of diplomats whose only currency seems to be innuendo, rumor, speculation based on multiple hearsay. That’s not evidence; it’s junk…”

Likewise, Sen. Lindsay Graham, who chairs the Senate Judiciary Committee, has vowed there will be no impeachment trial based on hearsay evidence and/or an anonymous accuser. “What they’re doing in the House is a danger to the presidency itself,” he said, adding that any trial in the Senate would have to expose the “whistleblower” — and all his connections — so that the President could confront his accuser.

In other words, Democrats, be careful what you wish for.

Early in Wednesday’s proceedings, Ratcliffe asked for a point of order on whether members could object to leading questions and hearsay, as he had already seen ample opportunity to do that while Democrats had had the floor. (Schiff essentially ignored him and looked like an absolute prig.) Later, he asked both witnesses straight-out, “So, in this impeachment hearing today, where we impeach Presidents for treason or bribery or other high crimes, where is the impeachable offense in that call? Are either of you here today to assert there was an impeachable offense in that call?” (Uncomfortable silence.) “Shout it out,” he continued. “Anyone?” (Nada.)

Some Democrat members, notably Joaquin Castro, asked incredibly leading questions to get witnesses to agree that certain behavior would be bad. The perceptive among you will have noticed he offered no actual evidence of said behavior. Those are the clips that will run over and over on MSNBC.  But once you catch on to this tactic, it’s so freaking obvious. The “crime” is always in their interpretation — what they choose to believe the President’s intention was.

And that’s why the Republicans are going to have to get even tougher, to keep true-believer Democrats and the media (but I repeat myself) from being able to impeach the President according to their own interpretations of what the President did. Look who’s helping them now, on-air as a newly-hired NBC news analyst…

But a few Democrats are apparently so shaken by their side’s tactics that they are considering leaving the party. I’ll close with a note of optimism about the human race, brought to us by Rep. Kevin McCarthy in an interview Wednesday with Sean Hannity. “I’ve had a couple; I had a Democrat come to me today and tell me he even questioned about whether he should stay a Democrat or he should re-register. He said, ‘This is not the party that I know…these individuals and the direction that they’re going is totally wrong.’”