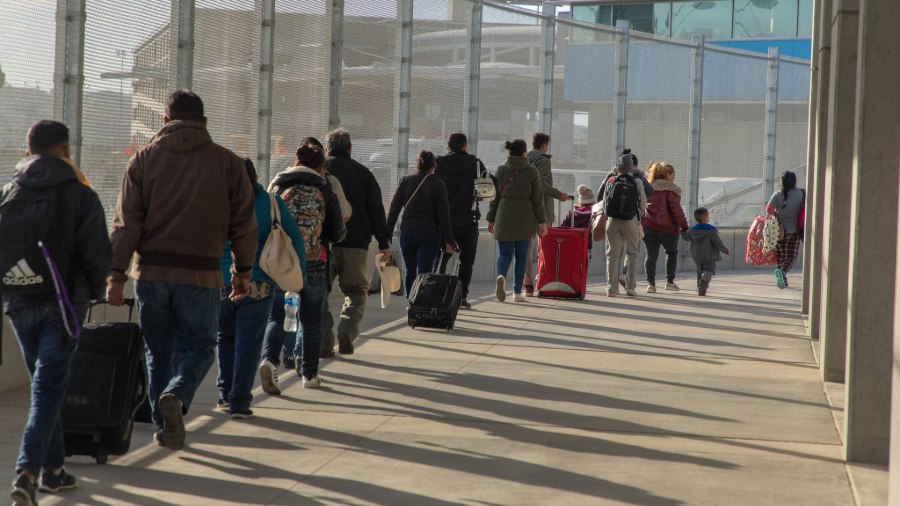 Inadmissible aliens, some seeking asylum, are processed by CBP officers at the San Ysidro Port of Entry on November 23, 2018.

The majority of asylum applications are being denied in the U.S. immigration court system, supporting a narrative by border hawks that most asylum seekers are lodging bogus claims.

A total of 33,194 asylum cases have been adjudicated so far this fiscal year from October 2019 to January, according to data Transactional Records Access Clearinghouse (TRAC) released Tuesday. However, immigration judges granted 8,828 individuals asylum in this four-month time period.

An immigration judge grants protected status to any applicant that is deemed to be lodging a legitimate asylum claim. Customs and Border Protection (CBP) agents saw an unprecedented number of family units and others appearing at the southern border to claim asylum in 2019, pushing U.S. resources to the breaking point. The Trump administration, however, has long argued that most of the applicants are simply abusing the process in a bid to enter the country.

The latest data suggest that asylum seekers are, by and large, making illegitimate claims.

“There is a consensus among enforcement professionals and analysts that most asylum seekers arriving at the border are really economic migrants with asylum claims that are flimsy at best. The Trump administration has taken a number of steps to decrease the incentive for fake asylum claims, and it is long overdue,” Dale L. Wilcox, the executive director of Immigration Reform Law Institute, told the Daily Caller News Foundation.

“Asylum is meant for those in fear of persecution by their government based on race, religion, nationality, membership in a particular social group, and political opinion in their home countries. It was never intended as a back-door into America,” Wilcox continued.

Asylum status is granted to individuals who face persecution in their homeland. However, many migrants from Central America — a top source of U.S. illegal immigration — say they left for better job opportunities. A 2017 survey by the Migration in the Southern Border of Mexico, for example, found that 72% of respondents citing economic conditions as their sole reason for leaving.

The Trump administration, in response to the immigration crisis that has been taking place at the U.S.-Mexico border, has implemented a number of measures aimed at mitigating abuse of the U.S. immigration system.

Namely, the administration launched Migrant Protection Protocols, or “Remain in Mexico,” a program that requires most foreign nationals who appear at the southern border to wait in Mexico for the entire duration of their court proceedings. This program is largely designed to prevent asylum applicants from being released into the interior of country — a major incentive for would-be asylum applicants.

Metering, a policy that controls the number of migrants who can cross the border a day and make a claim, as well as asylum agreements with several Central American countries have also been implemented by the White House to mitigate the immigration crisis.

Asylum is not the sole form of relief given to foreign nationals who appear at the border. Data TRAC compiled found that immigration courts also granted 13,082 individuals some other type of relief from deportation during the first four months of fiscal year 2020.