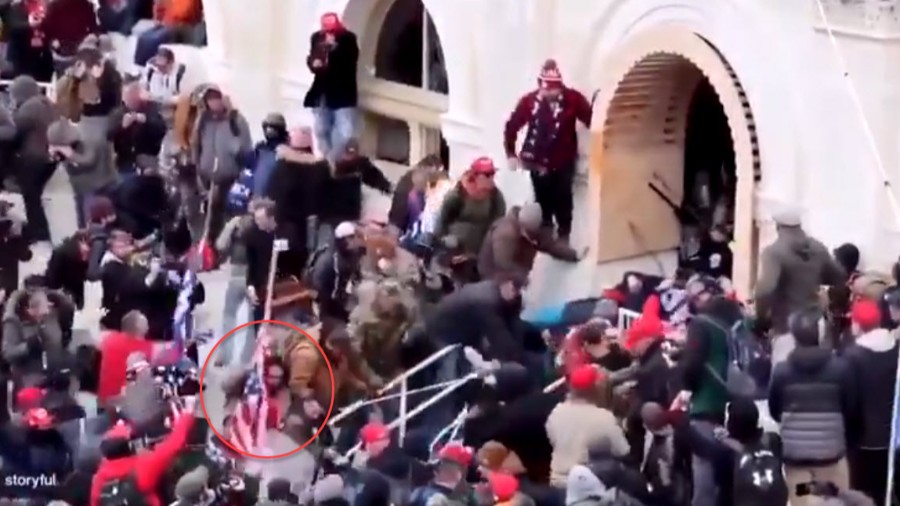 Peter Stager stood out among a sea of rioters at the U.S. Capitol last week for the weapon he used to attack a police officer guarding the building: an American flag.

Stager, an Arkansas native, was charged on Thursday over the attack, which was captured on video. He was identified after video surfaced of him speaking to a reporter following the Capitol melee.

“Everybody in there is a treasonous traitor,” he told Rozina Sabur, a reporter with The Telegraph, a British newspaper.

“Death is the only remedy for what’s in there.”

Minutes earlier, Stager and a group of protesters attacked a Washington, D.C. police officer who had been dragged into the crowd by another rioter.

A man now identified as Stager was spotted in a now-viral video striking the fallen officer with an American flag pole.

Disturbing footage from Wednesday at the Capitol appears to show a police officer being dragged down the stairs and beaten
pic.twitter.com/JwKvmtugVH

The officer was photographed lying face down on steps outside the Capitol with rioters surrounding him. The officer, who has not been identified, was reportedly sent to the hospital but later released.

According to an FBI special agent, a confidential witnesses contacted the FBI on Tuesday after seeing Stager in videos posted online.

“STAGER climbed the stairs while holding a flagpole with a United States flag affixed to it and used the pole to repeatedly strike B.M. while B.M. remained prone on the steps of the U.S. Capitol building,” Jason T. Coe, the special agent, said in an arrest warrant against Stager.

The FBI spoke to another confidential source who said that Stager admitted to being the person in both videos, according to Coe.

The source said that Stager claimed he did not know the person he was attacking was a police officer, believing instead that they were a member of Antifa, the left-wing group.

Coe, the FBI special agent, noted that “METROPOLITAN POLICE” was clearly visible on the back of the officer’s uniform.

The second confidential source said that Stager intended to turn himself in to police.

Federal prosecutors have filed charges against dozens of people who took part in the riots. Most of the charges have been against people who illegally entered the Capitol.

Five people died during the Capitol riots, including Capitol police officer Brian Sicknick, and Ashli Babbit, a Trump supporter who was fatally shot by a police officer after trying to enter a barricaded section of the Capitol.