The names of the 4 U.S. Marines murdered on Thursday have been released by military officials. 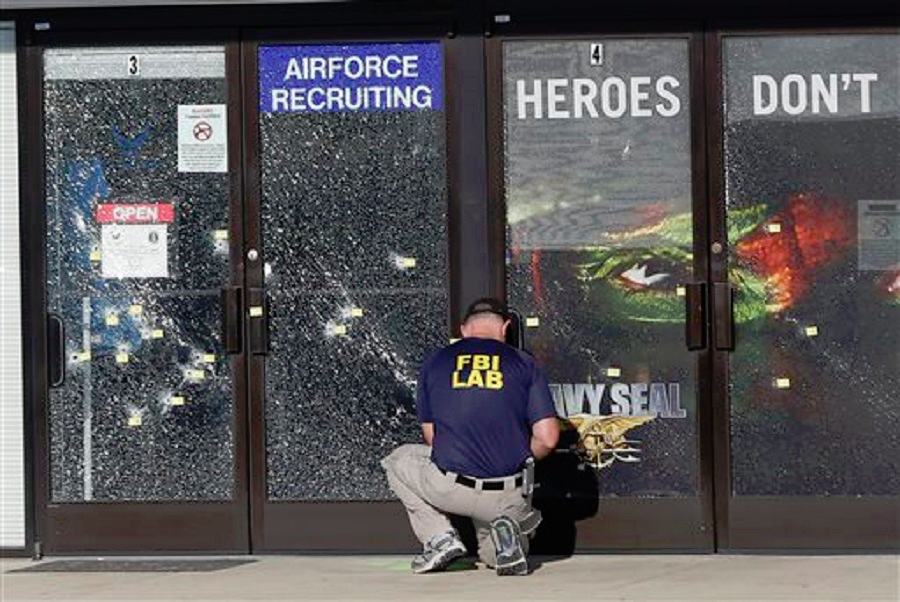 CHATTANOOGA, Tenn. (AP) — To neighbors and former classmates, Muhammad Youssef Abdulazeez was a well-mannered, outgoing young man who seemed “as Americanized as anyone else.” He wrestled in high school, his sister played tennis, and they enjoyed dinners with neighbors.

About the only change they noticed in him lately was his bushy new beard.

Now, investigators are trying to understand why the 24-year-old Kuwait-born man opened fire on two U.S. military sites in Chattanooga in an attack that left four Marines dead and raised the specter of terrorism on U.S. soil. He was killed by police.

Abdulazeez did not appear to have been on the radar of federal authorities before the bloodshed Thursday, officials said. But now counterterrorism investigators are taking a deep look at his online activities and foreign travel, searching for clues to his political views or influences.

Residents in the quiet neighborhood in Hixson, Tennessee, where Abdulazeez lived in a two-story home said they would see him walking along the wide streets or doing yard work. One neighbor recalled Abdulazeez giving him a ride home when he became stranded in a snowstorm.

“It’s kind of a general consensus from people that interacted with him that he was just your average citizen there in the neighborhood. There was no reason to suspect anything otherwise,” said Ken Smith, a city councilman who met with neighbors Thursday night.

Abdulazeez graduated from Red Bank High School in Chattanooga, where he was on the wrestling team.

He got an engineering degree from the University of Tennessee at Chattanooga in 2012 and worked as an intern a few years ago at the Tennessee Valley Authority, the federally owned utility that operates power plants and dams across the South. For the last three months, he had been working at Superior Essex Inc., which designs and makes wire and cable products.

In April, he was arrested on a drunken driving charge, and a mugshot showed him with a bushy beard.

Karen Jones, who lived next to the family for 14 years, said she was somewhat surprised last weekend by his appearance when she saw him walking with another man in woods behind the house, where he liked to shoot pellet guns at a red target suspended in a tree.

“He had this big beard, which was not how he used to be,” Jones said. She said he was typically clean-shaven.

The women of the family always wore head coverings in accordance with their Muslim faith, Jones said, and the father works for the city of Chattanooga. Two women led away from the home after the shootings Thursday were also in headscarves.

Sam Plank graduated from Red Bank High two years before Abdulazeez but hadn’t crossed paths with since 2006. “Obviously something has happened since then,” he said. “He was as Americanized as anyone else. At least that’s what it seemed like to me.”

Another Red Bank High graduate who knew him, Hussnain Javid, said Abdulazeez was “very outgoing,” adding: “Everyone knew of him.”

Javid, a 21-year-old senior at the University of Tennessee at Chattanooga, said he occasionally saw Abdulazeez at the Islamic Society of Greater Chattanooga, but the last time was roughly a year ago.

The official Kuwait News Agency on Friday quoted the Interior Ministry as saying that while Abdulazeez was born in Kuwait, he was of Jordanian origin. The report also said he traveled to Kuwait and Jordan in the spring of 2010.

For months, U.S. counterterrorism authorities have been warning of the danger of attacks by individuals inspired but not necessarily directed by the Islamic State group. Officials have said they have disrupted several such lone-wolf plots.

But FBI agent Ed Reinhold said Friday that so far, there is “no indication he was inspired by or directed by” ISIS or other groups.

The gunman on Thursday sprayed dozens of bullets at a military recruiting center at a strip mall in Chattanooga, then drove to a Navy-Marine training center a few miles away and shot up the installation. The bullets smashed through windows and sent service members scrambling for cover.

More details of the attack came out Friday, with Reinhold saying Abdulazeez was armed with at least one handgun and two long guns — which means rifle or a shotgun — and while some of the weapons were purchased legally, some may not have been. The gunman was also wearing a vest designed to hold extra ammunition, Reinhold said.

In addition to the Marines killed, three people were wounded, including a sailor who was seriously hurt.

The dead were identified Friday by the Marines as Gunnery Sgt. Thomas J. Sullivan of Hampden, Massachusetts; Staff Sgt. David A. Wyatt of Burke, North Carolina; Sgt. Carson A. Holmquist of Polk, Wisconsin; and Lance Cpl. Squire K. “Skip” Wells of Cobb County, Georgia. Sullivan, Wyatt and Holmquist had served in Iraq, Afghanistan or both.

Gen. Ray Odierno, the Army’s top officer, said that security at military recruiting and reserve centers will be reviewed, but that it is too early to say whether they should have security guards or other increased protection.

Odierno said there are legal issues involved in allowing recruiters to carry guns. And he said the centers need to be open and accessible to the public.

Brandon Elder, who works at a staffing company in the strip mall where the recruiting office is situated, said he heard what he thought was a jackhammer, and then someone shouted, “He’s shooting!”

Elder said he looked out his window onto the parking lot and saw a man in a silver convertible Mustang, a gun propped out the window, spraying bullets into the storefronts.

“He was in front of the recruiting office, just riding up, reversing and driving back,” he said. The barrage lasted maybe three or four minutes, and then the driver took off, he said: “It was crazy, surreal, like a movie. Is this really happening?”

On Friday, Gwen Gott added purple ribbons and a flag to a makeshift memorial taking shape outside the strip mall. It included balloons, piles of flowers and a sign staked into the ground: “You were the son of satan. Now you will answer to the son of God.”

“I love the service. Without them, where would we be as a country?” Gott said.

This Week at War: Saving Lives

This Week at War: Immigrant Returns to Afghanistan as U.S. Army Soldier