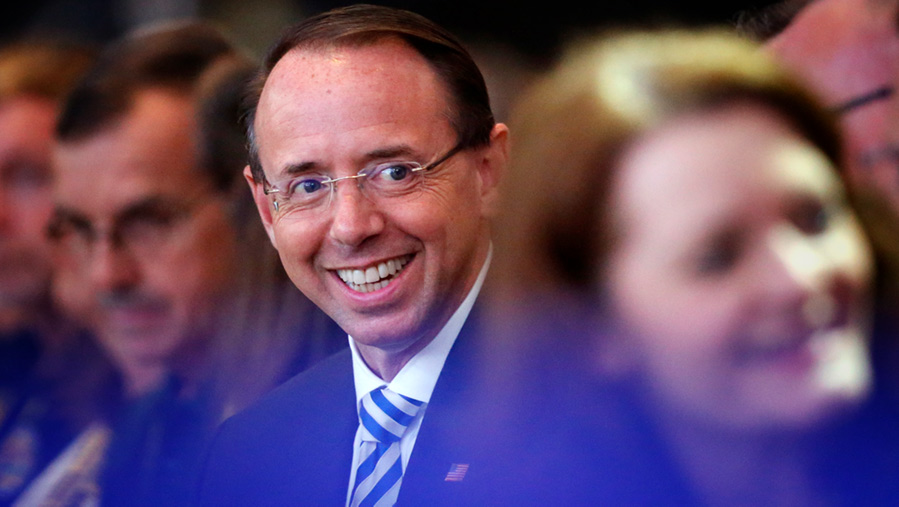 As John Solomon points out in his latest report on the FBI, Congress created the Federal Bureau of Investigation to “investigate crimes and stop foreign intelligence and terrorism threats.” It was never intended, by any stretch of the imagination, to be a power broker for our elections or, heaven help us, to strategize an execution of the 25th Amendment to depose a sitting President. But, according to new testimony from then-FBI special counsel James Baker, that seems to have been exactly what was going on.

Baker, as the FBI’s top attorney at the time, would presumably have been involved in the Foreign Intelligence Surveillance Act (FISA) application and three subsequent renewals for the surveillance of one-time Trump campaign associate Carter Page. So his testimony would be central to investigating the allegations concerning the abuse of this process. It was believed by those questioning him that he could shed light on why the political origin and inherent bias of the Steele “dossier” was withheld from the FISA court (as if we didn’t know).

News of Baker’s testimony before the House has been dripping out for the past week. According to Fox News’ Catherine Herridge in her report right after the closed-door hearing, he gave “explosive” testimony about the FBI’s handling of the Trump/Russia probe. Her sources at that time were House members present for the testimony: North Carolina Rep. Mark Meadows said he told them that “things were done in an abnormal fashion,” noting (in a fine example of understatement) that it was “a reflection of inherent bias that seemed to be present in certain circles.”

At the time of Herridge’s initial report, Baker refused to answer her questions about his handling of the dossier or his advice, if any, to Deputy Attorney General Rosenstein before Rosenstein signed the final surveillance warrant (too bad — good question!). Likewise, lawmakers offered few details about his testimony, citing a confidentiality agreement with Baker and his attorneys. But they described it as “forthcoming, deliberate and sober.” Ohio Rep. Jim Jordan said Baker had told them there was another source offering information to the FBI, and it was the name of this source that they found “pretty explosive.”

It’s been a week since Baker’s testimony, and stunning new details have just emerged. In Solomon’s report, he reveals Baker believed that the talk of secretly recording President Trump and going before the Cabinet to invoke the 25th Amendment was absolutely serious. He wasn’t in the particular meeting with Rosenstein that Rosenstein has characterized as “joking” in its references to wearing a wire, but he said he did have conversations with then-deputy FBI Director Andrew McCabe and his legal assistant, compulsive texter Lisa Page, that revealed the talk had been quite serious. And Herridge can now report that, based on what McCabe and Page told Baker immediately after that particular meeting, he believed that Rosenstein, after Comey’s firing, was working with two people inside the administration to invoke the 25th Amendment against Trump.

“As far as Baker was concerned, this was a real plan being discussed,” Solomon heard from one of his sources. “It was no laughing matter for the FBI.” These discussions, Baker recalled, took place right around the time then-Director James Comey was fired by Trump. Keep in mind, the 25th Amendment is the prescription for replacing the President or Vice President “in the event of death, removal, resignation or incapacitation.” It was passed in the aftermath of the John F. Kennedy assassination and was first applied in the 1970s with the Watergate scandal. Section 4 of the amendment deals with incapacitation, meaning when the President “is unable to discharge the powers and duties of his office.”

The President was hardly incapacitated. As Solomon puts it, “He was fully exercising his powers — but in a way the FBI leadership did not like.” In other words, if they were talking seriously about doing this, they were discussing carrying out what’s known as a “bloodless coup.”

Another source told Solomon, “You walk away from the Baker interview with little doubt that the FBI leadership in that 2017-2018 time frame saw itself as much more than a neutral investigative agency but actually as a force to stop Trump’s election before it happened and then maybe reversing it after the election was over.”

Another thing Baker’s testimony confirms: various versions of that Steele dossier were flying around in the fall of 2016, in a concerted attempt to get it into the hands of the FBI. In addition to Christopher Steele, John McCain and Glenn Simpson, we can add David Corn of Mother Jones magazine to those who approached FBI officials. Corn gave one version of it to Baker in November of 2016, right after Trump won the election. By then, Steele had been fired by the FBI and was no longer supposed to be used as a source, so Corn served as a “back door” to keep the information flowing.

This is one more example of someone in the media being used as an investigative source when all they were really doing was supplying politically motivated smears to add to the FISA application.

Rosenstein’s office put out a statement back on September 21, saying, “I never pursued or authorized recording the President and any suggestion that I have ever advocated for the removal of the President is absolutely false.” Enough with the prepared statements; Rosenstein needs to be sworn in and directly questioned for the record, particularly about the identity of the two “inside” people Baker said he was working with on that 25th Amendment plan. He is scheduled to appear to testify on Capitol Hill this Thursday, but Herridge reports that committee members are not in agreement as to whether it will be transcribed testimony or just a briefing (not transcribed).

Folks, we are getting down to something that is way too important to allow for imprecision. Two words to committee members: TRANSCRIBE IT. That is, if Rosenstein shows up and doesn’t invoke the “5th Amendment plan.”

We’re Getting Close to Accountability

The President said after his talk with Rosenstein that the deputy attorney general would be keeping his job. Given all the circumstances, we know that this has to be mostly about politics and timing. Rosenstein has conflicts of interest that are supposed to prevent him from overseeing the investigation of Trump, and Trump knows that. I believe the President trusts that the truth of what was happening inside the FBI will unfold as Congress investigates, and he’s willing to sit back, pop some popcorn and watch the show.

As for my readers, I know many of you have given up and think there will be no accountability. But we’re getting really close here. Know who else would like to see accountability? The rank-and-file at the FBI, who must be mortified. With Baker’s testimony, we can confirm that FBI officials were using sources that were purely political (including so-called journalists, who shouldn’t be political but are), that they ignored subpoenas and used heavy redaction to try to hide this, and that they were having serious conversations about wearing a wire and trying to get the President removed from office. If these things happened, we have to keep digging, find the truth and demand accountability.

Short of talking about an outright assassination plot, it doesn’t get much worse than this.