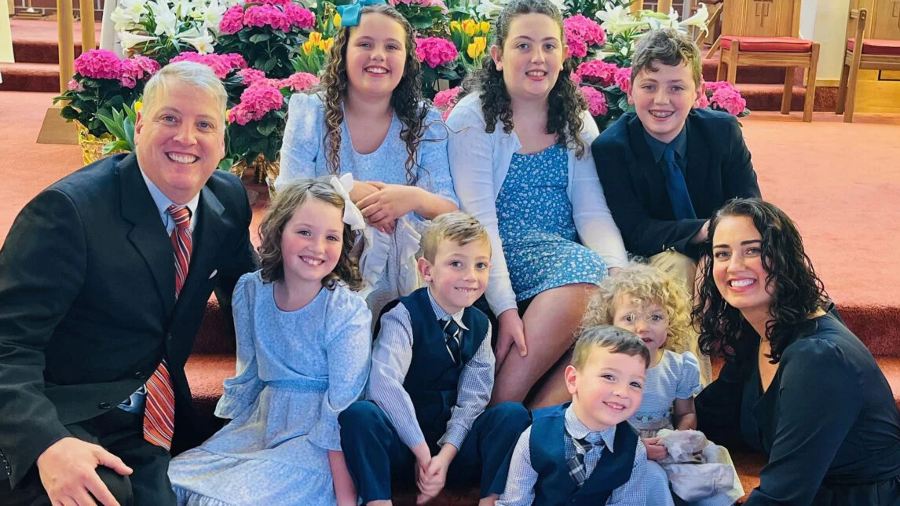 Mark Houck, a pro-life advocate and father of seven, woke up Friday morning to a team of FBI agents raiding his home in Kintnersville, Pennsylvania. Houck’s wife, Ryan-Marie, told Life Site News that 25-30 FBI agents entered their home around 7 a.m.

“The kids were all just screaming. It was all just very scary and traumatic,” Ryan-Marie Houck told Life Site News about her husband’s arrest, which she and her children witnessed. She says her husband pleaded with the FBI agents to be calm, referencing the couple’s seven children.

“They had big, huge rifles pointed at Mark and pointed at me and kind of pointed throughout the house,” Ryan-Marie Houck told the pro-life news outlet.

Catholic News Agency reports that the FBI confirmed that Mark Houck was arrested outside his home “without incident” Friday morning.

According to federal court documents, Houck was arrested on the charge that he assaulted a 72-year-old volunteer, whose name is not provided, at the Planned Parenthood Elizabeth Blackwell Health Center abortion clinic in Philadelphia, Pennsylvania, twice on Oct. 13, 2021.

The District Court in Philadelphia investigated and dismissed the charge earlier this summer, Houck’s wife, Ryan-Marie, told Life Site News. She said that her husband sometimes brought their eldest son with him. She added that on multiple occasions that a “pro-abortion protestor” would say “crude … inappropriate and disgusting things” to their 12-year-old son, such as “your dad’s a f*g” and other vulgar slurs.

Her husband repeatedly told the man to stop verbally harassing his son, Ryan-Marie Houck explained. But the man didn’t stop. On one occasion, the man “kind of came into [the son’s] personal space,” Ryan-Marie Houck said. “Mark shoved him away from his child, and the guy fell back … He didn’t have any injuries or anything, but he tried to sue Mark.”

State Sen. Doug Mastriano, who is the Republican candidate for governor in Pennsylvania, released a statement following Houck’s arrest. “The continued weaponization of the FBI and persecution by Joe Biden’s DOJ against ordinary Americans is an outrage,” Mastriano wrote, adding:

This morning, a heavily armed SWAT team of dozens of FBI agents raided the home of Mark Houck of Bucks County, Pennsylvania, with his wife and terrified children inside over a case that was long thrown out by the District Court in Philadelphia. Mark and Ryan-Marie Houck’s seven children were traumatized and in tears as they witnessed their parents held at gunpoint and their father hauled away in handcuffs.

After his Friday arrest, Houck appeared before the U.S. Eastern District Court in Pennsylvania. He was indicted for violating the Freedom of Access to Clinic Entrances (FACE) Act, which “makes it a federal crime to use force with the intent to injure, intimidate, and interfere with anyone because that person is a provider of reproductive health care,” the Eastern District of Pennsylvania U.S. Attorney’s Office wrote in a Friday press release.

Authorities released Houck later that day, but he now faces felony charges. If convicted, Houck could have up to an 11-year prison sentence, and fines of up to $350,000.

“Saying that doesn’t make someone an insurrectionist — if anything, it’s the DOJ that’s ‘threatening democracy,’” he added.

As I’ve said, the Mar-a-Lago raid isn’t just about President Trump — it’s about all of us.

Saying that doesn’t make someone an insurrectionist—if anything, it’s the DOJ that’s “threatening democracy.”https://t.co/CRe7yOQYfQ

A GiveSendGo campaign for the Houck family has raised over $127,000.