Misinformation is much more destructive when it emanates from a monopolistic “Ministry of Truth.” 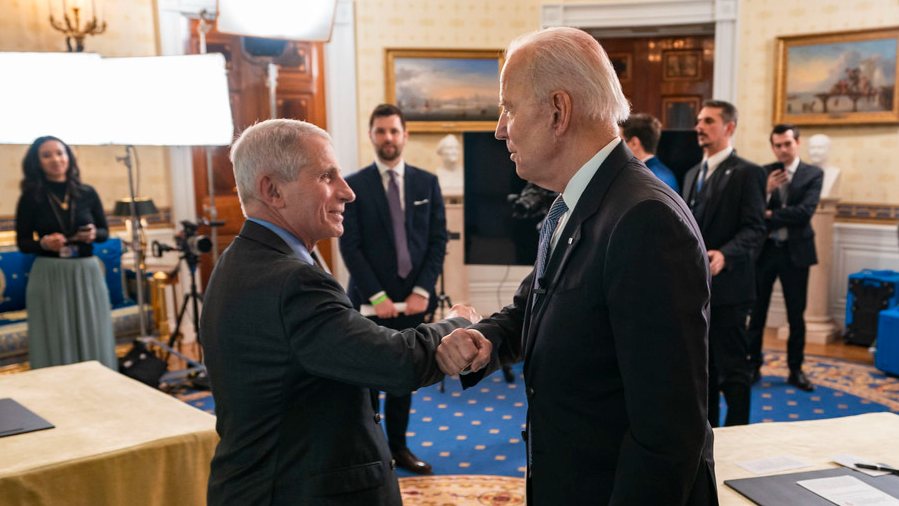 This week, Senator Rand Paul (R-KY) and the Director of the National Institutes of Health (NIH) Anthony Fauci squared off in the public arena yet again.

The two have frequently sparred over pandemic policy in congressional committee hearings over the past year and a half, and their debates have often been contentious. But this interaction involved a particularly frazzled Fauci. In the brief exchange, Fauci looked around for assistance in the room, called Paul a liar, and shouted “you don’t know what you’re talking about!” as Paul proceeded to question him.

In his opening statement, Paul referenced an academic paper that further calls into question the origins of the COVID-19 variant that upended the world. “We hypothesize that the direct progenitor of SARS-CoV may have originated after sequential recombination events between the precursors of these SARSr-CoVs,” stated the numerous scientists and doctors who authored the research.

The data is the latest in a long line of evidence that has emerged indicating the viability of the theory that the disease not only came from a lab, but that the NIH actually funded the laboratory and research that may have produced it. But in a May hearing, when originally pressed on it by Dr. Paul, Fauci denied that his agency funded gain-of-function research at the Wuhan Institute of Virology (WIV).

Those statements were brought into doubt. The NIH did fund research at WIV that analyzed bat specimens collected from caves in China to study their potential for infecting humans. The grant was made in a roundabout way through a nonprofit called EcoHealth.

“Dr. Fauci, knowing that it is a crime to lie to Congress, do you wish to retract your statement of May 11 where you claimed that the NIH never funded gain-of-function research and move on?” Paul asked.

In response, Fauci stated, “Senator Paul, I have never lied before the Congress, and I do not retract that statement. This paper that you’re referring to was judged by qualified staff, up and down the chain, as not being gain-of-function.”

It appears that instead of arguing the actual data, Fauci is now resorting to semantics around the definition of “gain-of-function,” but even to a scientific layman it is becoming increasingly clear that Fauci misled the American public for some time on this matter. He knew he authorized the funding and was not forthcoming on that fact — even when asked by a sitting Senator.

Hey guys, @RandPaul was right and Fauci was wrong. The NIH was funding gain of function research in Wuhan but NIH pretended it didn't meet their "gain of function" definition to avoid their own oversight mechanism. SorryNotSorry if that doesn't fit your favorite narrative.

Paul was having none of it. “I will be sending a letter to the Department of Justice asking for a criminal referral because he has lied to Congress. We have scientists that were lined up by the dozens to say that the research he was funding was gain-of-function,” Paul told Sean Hannity.

Fool Me Once Shame on Me, Fool Me Twice You Might Be Fauci

This would certainly not be the first time Fauci has been caught giving the American people false information, not by a long shot.

From the very beginning of the crisis, Fauci found it appropriate to lie to the people and control valuable information around the pandemic.

As people rushed to purchase masks and other protective wear, he gave statements discouraging the use of masks and claiming they were not effective at blocking the illness. The government of course quickly reversed its position and continues to mandate masks in public places to this day, despite the availability of vaccines.

For his part, Fauci claims he doesn’t regret lying to the American people, theoretically endangering millions of lives according to his current position, because there was a shortage of PPE at the time.

Evidence suggests there could be another layer to the story that complicates the narrative over Fauci’s flip flop. But if we listen to Fauci’s account, he essentially believed it was alright to prioritize some lives over others and lie to people in the process.

The audacity of believing it is morally appropriate to play God with people’s lives and determine who should have access to public health information in a crisis is appalling, and it is a trend Fauci continued.

Last summer he advised schools to close nationwide, despite the fact that the actual science always showed children were all but immune from the disease. Instead of giving local districts the basic information needed for prevention and allowing them to determine which measures were appropriate, Fauci again felt it proper to use his significant influence to pressure schools to close nationwide.

Paul confronted Fauci on many of these topics as well, and each time the Senator from Kentucky was eventually proven right — though neither he nor the American people received an apology for the false narratives or the horrible ramifications of them in our society.

To add insult to injury, the government has nominated itself as the sole arbiter of truth when it comes to information on the coronavirus. The Biden Administration has claimed misinformation on social media platforms is “killing people” and has openly been pressuring Facebook to remove posts that do not align with their narrative.

“We’re flagging problematic posts for Facebook that spread disinformation. We’re working with doctors and medical experts…who are popular with their audience with accurate information. So, we’re helping get trusted content out there,” said White House Press Secretary Jen Psaki.

This is concerning for multiple reasons. First and foremost, it is a violation of free speech and the free market for the government to tell any private business how to run its operations. Plain and simple.

Additionally, the government has no business being in a position of determining what the truth is or is not. They’ve been caught lying more times than we can count and are likely to continue, given how misleading the public often serves to increase their own power.

No matter which party is in power, the government cannot be trusted to label 'truth' or 'fiction' any more than Facebook or Twitter can.

Remember when then-President Trump claimed COVID would just 'go away' without a vaccine? https://t.co/2IUs2YFgQV

The government’s track record of inaccuracy by no means begins with COVID, but has certainly grown with it. This is the last entity we should trust with a monopoly over information.

Fauci’s disastrous track record of misinformation, laid bare throughout his many rounds with Rand Paul, shows why the government has no business trying to be a monolithic source and arbiter of truth. Misinformation is much more destructive when it emanates from a monopolistic “Ministry of Truth.” And truth has a much greater chance at out-competing falsehood in a free marketplace of ideas.

Hannah Cox is the Content Manager and Brand Ambassador for the Foundation for Economic Education. Originally published on FEE.org. Reprinted with permission.