Fantastic Four: Full Circle: A Throwback to the Age of American Optimism 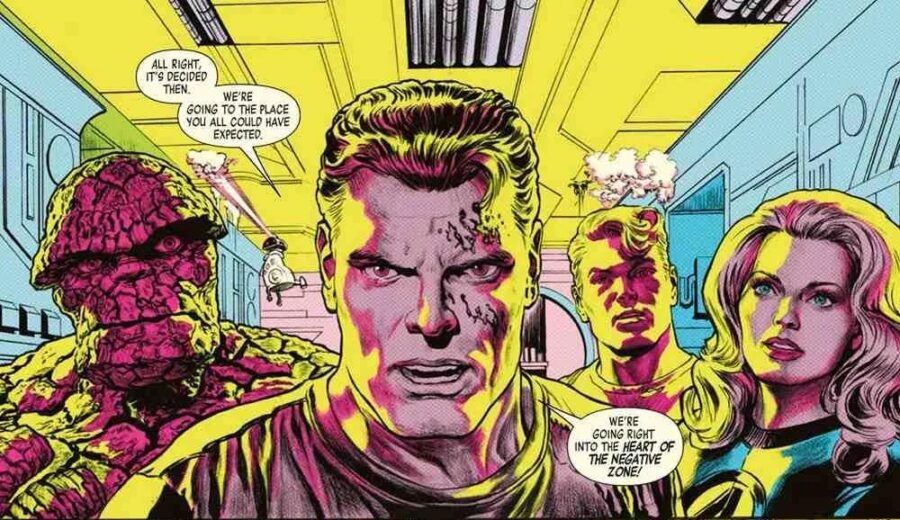 Fantastic Four: Full Circle, is a beautiful and engaging new graphic novel written and drawn by comic book artist Alex Ross. Ross became famous in 1994 with Marvels, which used traditional painting to depict superheroes. He’s a legend in the world of comics.

Full Circle uses pen, ink and color rather than paint, but the images still explode off the page with awesome energy. The book is a throwback to the high adventure of 1960s Marvel Comics, infused with hope for the future and American pride in the space program, and free of political correctness.

Marvel giants and Fantastic Four creators Stan Lee and Jack Kirby came down on the side of America and the family, particularly against their arch-nemesis Dr. Doom. He was a dictator from the Soviet-style Latveria in Eastern Europe. Doom’s one demand was that his subjects be “happy” at any cost. The frozen smiles of the people of Latveria was a direct commentary on the coercive Utopia offered by communism. Jack Kirby’s art was a celebration of the human form in action as well as an awesome immersion into the astonishing wonders of outer space.

A Throwback to a Happier Time

Fantastic Four: Full Circle is based on events first depicted in 1966’s Fantastic Four #51. An intruder breaking into the Baxter Building, the home of the FF, sends Reed Richard, Johnny and Sure Storm and Ben Grim on a mission to a world beyond the microscopic world: the Negative Zone. It’s a science fiction story about traveling to strange new worlds in space, defending the innocent and forging new alliances with like-minded new friends. “It seemed very suitable for the material,” creator Ross recently told the Hollywood Reporter:

To do the pop art aesthetic right, you couldn’t do it with over-rendered, over-illustrated work. I needed to boil down what I do to a more graphic degree. Realism is my stock and trade, but you can still get that within a more high-contrast representation.

Ross said he “wanted to present a version of the Fantastic Four as close to a Jack Kirby style he envisioned for the series as he created the characters. His style informed the first 10 years of their existence and it’s the shadow all artists have been working under for these last 60 years.”

A Dash of Humor

While Ross’s art is glorious, it is totally different from Jack Kirby’s. The latter’s block figures were almost the opposite of realism, something that is an advantage when depicting the fantasy world of comics. Also — and this always gets ignored or downplayed — Kirby was one of the funniest artists of the 20th century. His exaggerations and comic blasts were not just cool, they were often slapstick. Even in the sea of a world-threatening battle he could come up with sight gags or put the characters in situations that were delightfully slapstick.

In one of my favorites issues from the 1960s, the FF fights the Sandman. At one point this villain drops rock-monster The Thing into a sand cylinder and starts rolling him towards the Hudson River. It’s a hilarious sight gag made even better by the dialogue. “This is the last time you’re going to mess with my plans,” Sandman says. “Izzat so?” the Thing replies. “Whatcha aimin’ to do — leave town?”

How We Got So Dark

Comics, driven by the success of the Batman “Dark Knight” model, have lost so much of the pure, pro-American joy that once made Marvel so beloved by fans. In the comics of the 1960s we got humor, patriotism, romantic love that resulted in marriage and children, and moments of pure happiness and optimism.

The Marvel Universe began in early 1961, the forward-looking dawn of Kennedy’s New Frontier. It was that year that comic book writer Stan Lee was given permission by his publisher Martin Goodman, who was envious of rival DC Comics’ successful Justice League comic, to create a comic with a team of superheroes. Lee and genius co-creator Jack Kirby (both men were veterans of World War II) came up with The Fantastic Four, a family who develop superpowers when their spaceship is blasted with gamma rays.

Reed Richards, Susan and Johnny Storm and Ben Grimm argued and got irritated with each other, but their lives were also filled with humor, love, and a passionate desire to defend American ideals and freedom. If the show runners of the planned new Fantastic Four movie keep this in mind, they could make it another hit like Top Gun: Maverick.

A Bigger Stick Than the Other Guy

The first Marvel films of the last decade tapped into this winning formula. In 2008’s Iron Man, hero Tony Stark (Robbert Downey, Jr.) is a genius inventor and industrialist whose family got rich manufacturing weapons. Early in the film Stark is confronted by a reporter from Vanity Fair. “Let me guess — Berkeley?” Stark replies when she accuses him of being a “merchant of death” and war profiteer. “The day that weapons are no longer needed to keep the peace, I’ll start making bricks and beams for baby hospitals.” He adds, “Peace means having a bigger stick than the other guy,” noting that several technological breakthroughs that aided humanity came directly from military research and funding.

This exchange with the liberal reporter in Iron Man had an interesting recent real-life analog. At the 2017 New York comic convention, Marvel Entertainment announced it would be partnering with defense giant Northrop Grumman to produce a one-shot comic book. The comic, which would feature a team of Northrop Grumman-themed heroes, was aimed at encouraging young people to go into STEM fields. But Marvel was flooded with responses to the tweeted announcement, the vast majority of them negative. Many comparisons were made between this event and the movie version of Iron Man, a billionaire CEO of a weapons company who, after seeing the effects his weapons have on innocents, turns his company away from developing weapons.

Bowing to the Latverian mob, Marvel cancelled the event. In a statement to pop-culture site Polygon.com, Marvel said:

The activation with Northrop Grumman at New York Comic Con was meant to focus on aerospace technology and exploration in a positive way. However, as the spirit of that intent has not come across, we will not be proceeding with this partnership including this weekend’s event programming. Marvel and Northrop Grumman continue to be committed to elevating, and introducing, STEM to a broad audience.

Writing at Defense News, Aaron Mehta noted that ComicCon was a bad place to launch the initiative, as comic conventions tend to attract more liberal and “reactive” attendees. Mehta also noted the hypocrisy of the left-wing critics of comics:

To be fair, there is some dissonance here. Marvel fans have no problem rooting on the X-Men, who famously fly around in a modified SR-71 Blackbird; one of the characters has a pet dragon literally named Lockheed. Iron Man may have renounced his defense industry profits, but he still flies around in an up-armored robotic suit and at one point served as U.S. secretary of defense.

Would You Stay and Fight for America?