‘My Family Is Not the Product of Ignorance’: Harvard Grad and Mom of 8 Takes on French President 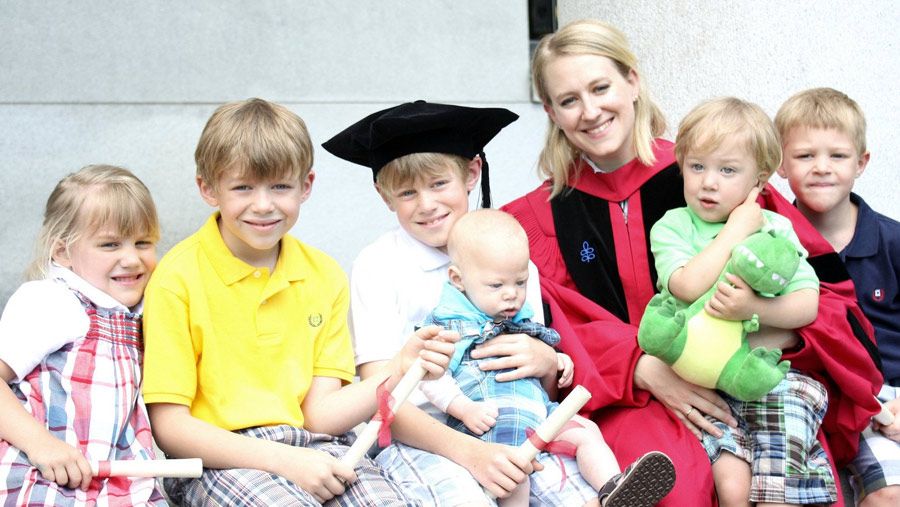 Part of Catherine Ruth Pakaluk’s family after Harvard’s commencement in 2010. Left to right: Lizzie (4), Nick (8), Joe (10), Blaise (6 months), Mark (2), Greg (6). Since the photo was taken, Pakaluk has had two more children, Valerie and Finnan, with her husband Michael.

The president of France shouldn’t speak for women — and certainly not on how many children they decide to have.

French President Emmanuel Macron recently said, “I always say: ‘Present me the woman who decided, being perfectly educated, to have seven, eight, or nine children.”

“Please present me with the young girl who decided to leave school at 10 in order to be married at 12,” he added during his remarks at the Bill and Melinda Gates Foundation’s “Goalkeepers” event, which was held last month in New York.

Of course, most women agree with Macron on child brides.

But it’s insulting to moms of large families to imply a big family is akin to marrying off children.

I spoke to one such woman, Catherine Ruth Pakaluk, an assistant professor of social research and economic thought at the Catholic University of America, who has 8 children — and no regrets about that.

“When I saw [Macron’s] quotation, my first thought was, ‘Hey, wait a second, I exist, and I know lots of people like me that exist,’” Pakaluk, who received her bachelor’s degree at the University of Pennsylvania and her doctorate at Harvard University, told The Daily Signal in an interview.

She added that she thought plenty of moms of large families would share the reaction to Macron of thinking that, “Hey, wait, I exist, and my family is not the product of ignorance.”

Pakaluk also started a hashtag: #PostcardsforMacron, to showcase the big families some educated women choose to have.

Macron says: ‘Present me the woman who decided, being perfectly educated, to have seven, eight or nine children.’ Very well then! The subject of my current research. I’ll consider this an invite to send you a copy of the manuscript when done. https://t.co/SC0YurJfAq

“I thought let’s keep this simple and friendly — I am not interested in picking a fight with the president of France,” she said.

Pakaluk tweeted out a photo with some of her children using the hashtag — and as it turns out, other women agree with her.

#postcardsforMacron my mother with her masters in education, now with a top level security clearance, and her 7 children- because it takes one smart woman to raise the next generation. pic.twitter.com/SRb78lJOdK

#PostcardsForMacron I earned a pre-med biology degree from William Jewell College and Cambridge University,but my biggest joy is my beautiful family of 7 children and physician husband. pic.twitter.com/v9skMU1s3v

I have a BA from UCSB, and a California state teaching credential. But my greatest accomplishment is being a mother to 7 children. Besides, your comment suggesting only uneducated women have many children is classist and elitist. #PostcardsForMacron pic.twitter.com/26GRlfWerw

#postcardsforMacron Just about to graduate with second degree me and my husband have been blessed with five beautiful children … we are educated in more than what society sees as acceptable and our lives are full of love … share your stories xx pic.twitter.com/eGqATBkwCy

I only have 5 kids but my 6th will be home soon from China. #postcardsforMacron pic.twitter.com/nalXiyhEAq

Here’s another for #postcardsforMacron… UF M.Ed., but these seven are by far my best Post-Grad work. #GaGatorspic.twitter.com/IroKTXIeXk

Macron’s stance that well-educated women choose not to have large families touched on a sore spot with some women, like Pakaluk.

“I know for myself how many times I get these offhand comments, ‘Oh, don’t you know where babies come from?’ or ‘Oh, what happened to you guys?’” she said, adding, “I think my choice deserves respect.”

Pakaluk, whose husband Michael is a professor of ethics and social philosophy, also at the Catholic University of America, said her response was “to seize the opportunity … to highlight … a group of people that are invisible currently and don’t need to be and are beautiful and interesting.”

The widespread response to #PostcardsforMacron show that women who have large families want to be heard and appreciated, not dismissed.

While women who pursue their education and go on to have large families are definitely admirable, there is a larger, all-encompassing discussion to be had to address the stigma perpetrated on women who choose to have more than several kids.

“It really isn’t about these high numbers and impressive degrees,” says Pakaluk. “It’s about pushing back on something instinctive in the progressive mind which doesn’t see that this behavior of choosing a large family can be an intentional choice for many, many reasons.”

And as the widespread response to her hashtag shows, she’s far from the only one who thinks that way.

This is my response to Macron’s comment: “I always say: ‘Present me the woman who decided, being perfectly educated, to have seven, eight or nine children.’”

I’d love to see your #postcardsforMacron and your lovely families. pic.twitter.com/NMhzh9AGnb

Yes, I have a university degree. But the most important things I’ve learned are from being a mother and wife. 8 on earth 1 in Heaven and 1 more on the way! #postcardsforMacron #motherhood #chooselife pic.twitter.com/3jY44lT3s1

#postcardsforMacron I’m the second of nine. Dad was a Yalie. Mom was secretarial school, a Rosie the Riveter in WWII, and whip-smart. The idea that university education is the only education indicates very limited thinking, M. Macron. pic.twitter.com/xwyCdvPmwl

I’m educated and an educator. And the proud mom of six. #postcardsforMacron pic.twitter.com/yjvaRdtYQc

#PostcardsforMacron Law Degree 12 Children, Son in -Law, 2 grandchildren. So much LOVE! So much JOY! pic.twitter.com/hWOetXgi7l

#postcardsformacron
My oldest daughter went to heaven when she was 10. So yes, I have six children and went to an Ivy. Imagine that!Cornell University ‘90 pic.twitter.com/qs8W2NToXB

Ooh, I can make the 5+ kids standard. Working on 2nd Masters.#PostcardsforMacron pic.twitter.com/mF8XjNDEL2

I’m so enjoying the photos of all the lovely families in this thread that I had to share one of my own. This is my smart & beautiful Mom with her 2 sons, 2 of her 3 sons-in-law & 1 grandson. She has a BA in English & 5 kids. #postcardsforMacron pic.twitter.com/67CYHVQQtr

Contributing to #postcardsforMacron @EmmanuelMacron started by @CRPakaluk BS in physics, studied law, now a student in MA Thomistic Studies degree 5 kids pictured with 4 of them. pic.twitter.com/fpu3uMjDv2

I don’t usually feel like I have a small family, but this #postcardsforMacron has me feeling like an underachiever. BS in Mathematics w/ teacher certification. Maybe that’s why We are so good at multiplying! #onlyfive #stilltimeformore pic.twitter.com/O1DJijcgqs

I’m a college graduate and mom of 4. I wish I could’ve had more! #postcardsforMacronpic.twitter.com/iYB3a6vjms

Fertility and the French