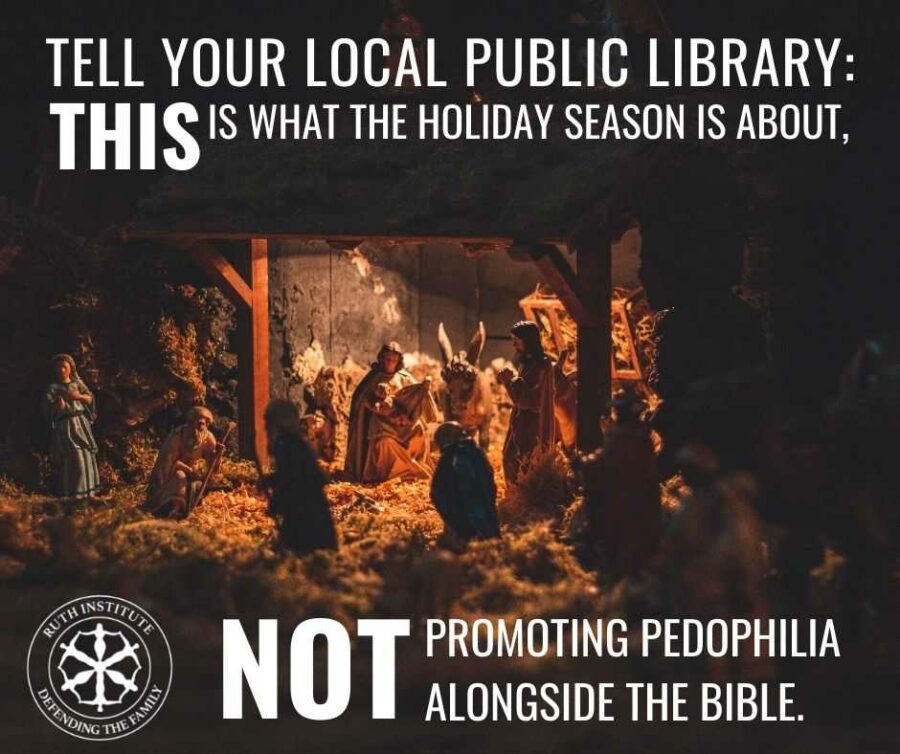 A “holiday” display at a Fairfax County library in Virginia seemed deliberately designed to be as offensive as possible. Or as a trial balloon, to see what could be gotten away with.

The window display included elves, a Bible, and two works of homosexual pornography: Lawn Boy, with a character recalling his sexual experiences with a man when he was 10 years old, and Gender Queer: A Memoir, which includes photos of sexual acts between a man and a boy.

The display was removed following an outcry.

Dr. Jennifer Morse of the Ruth Institute remarked: “The kicker was when the library director said, ‘It was not the intention of the staff to create a display that could be construed as offensive.’”

“Come again?” Morse said. “The library staff didn’t know that anyone could be offended by displaying homoerotic books along with the Bible? To call this disingenuous would be the understatement of the year.”

Morse continued: “Obviously this was a way for the staff to thumb its nose at those who object to corrupting children. Making these same books available in the county’s public schools caused an uproar earlier this year. Despite parents protesting at school board meetings, in this case, the books were not removed.”

Morse explained: “It’s as if the staff was saying to families, ‘So, you find pedophilia objectional, do you? Well, we’re going to rub your noses in it.’ That they later thought better of the tactic doesn’t alter this reality.”

“The Sexual Revolution is relentless in pushing its values at every opportunity, in schools, libraries and media. The Virginia governor’s race, based in part on public reaction to this arrogant elitism, obviously hasn’t made a dent in this thinking.”

Morse concluded: “Kudos to the parents who raised their voices in protest over the ‘holiday display.’ The skirmish has been won. The war continues.”

Defend the Sanctity of Life in Less Than a Minute

Scott Klusendorf is the author of The Case for Life: Equipping Christians to Engage the Culture, and co-author of Stand for Life. He travels throughout the United States and Canada training pro-life advocates to persuasively defend their views in the public square. He has debated or lectured to student groups at more than 80 colleges and universities, and appears regularly on nationally syndicated Christian and secular radio shows.

Mr. Klusendorf spoke with Dr. Jennifer Roback Morse on the Dr. J Show about the craziest things that have happened to them when giving pro-life speeches, as well as the weak tactics used by abortion advocates.

Want to learn more about making the case for life in one minute or less? Watch and learn.

Speakers at an October California Teachers Association meeting, the largest teacher union in the state, urged members to monitor students’ on-line activity to identify the vulnerable and recruit them for LGBT clubs.

“Such on-line stalking is appalling,” said Ruth Institute President Dr. Jennifer Morse, Ph.D. “But sadly, I’m not surprised that activist teachers are steering children toward questioning the sex of their bodies. We’ve been hearing this sort of thing from heartbroken parents across the country.”

Morse noted: “The term ‘stalking’ isn’t our term. The so-called educators admit to it themselves. One of the speakers at the meeting said, ‘We started to try and identify kids. When we were doing virtual learning, we totally stalked what they were doing on Google when they weren’t doing school work.’”

However, Morse was disappointed by Wall Street Journal writer Abigail Shrier’s comment on a Fox News program. The Irreversible Damage: The Transgender Craze Seducing our Daughters author said, “These are not members of LGBTQ doing this. I want to be real clear on that. These are activist teachers.”

Morse responded: “I very much appreciate Mrs. Shrier’s important reporting on the trans issue. But the distinction she draws here is artificial. The ‘activist teachers’ are working hand in glove with members of LGBTQ groups.”

“Shrier is correct to note that the teachers want to separate children from their parents’ values. Public school teachers have been using sexuality education for that purpose for decades. Sex ed is the delivery system for the Sexual Revolution’s propaganda, which at the moment happens to be transgenderism. If Mrs. Shrier thinks she can insulate herself from the ire of trans-activists, I think she is mistaken.”

“In the face of all of this, the Ruth Institute will continue to carry the banner of parental rights and of schools that educate instead of indoctrinate,” Morse said.

In the latest development in gender insanity, Chicago public schools will now make all restrooms open to everyone.

In what it calls “a big step forward for gender equity,” the Chicago School System Tweeted: “We’re requiring all schools to adopt new signage informing students and staff that whether they’re male or female, they can use the restrooms that align with their gender identity or where they feel comfortable.”

Ruth Institute President, Dr. Jennifer Roback Morse said, “Students must no longer claim to identify with the opposite sex to use their bathrooms. They can just go wherever they feel ‘comfortable.’ This is the end game of the Gender Ideology: the complete elimination of the terms ‘male’ and ‘female’ from law and social practice.”

Morse continued: “I have been saying this since before the Obergefell decision. People thought ‘gay marriage’ was about fairness and inclusiveness. But once the Supreme Court declared the sex of the body to be irrelevant to marriage, governments across the country systematically removed ‘husband’ and ‘wife’ from marriage licenses, in favor of the gender-neutral ‘spouse’ or ‘partner.’ States removed ‘mother’ and ‘father’ from birth certificates and family law and replaced them with generic ‘parents.’”

“So now the schools are eliminating ‘boys’ and ‘girls’ from restroom doors in the name of ‘fairness’ and ‘inclusiveness.’ Who can be surprised?”

“The result is another assault on modesty and giving girls more of a chance to be raped in ‘gender-inclusive’ restrooms. When that happened this year at a school in Loudoun County, Virginia, it sparked a parent revolt.”

Morse concluded: “Please understand, the ideologues are not finished. They will not stop until they have removed every reference to the sex of the body from the law, and from every social institution, no matter whom it hurts.”

The Education Panel from the 4th Annual Summit for Survivors of the Sexual Revolution tackled the primary issues faced by parents today: dealing with schools pushing transgenderism, and indoctrinating their children with unhealthy, inappropriate “comprehensive sexuality education.”

The panel consists of: Mary McAlister of the Children and Parental Rights Campaign, Sharon Slater of Family Watch International, and Maria Keffler of Partners for Ethical Care. In this 14-minute video, they answer questions from the audience.