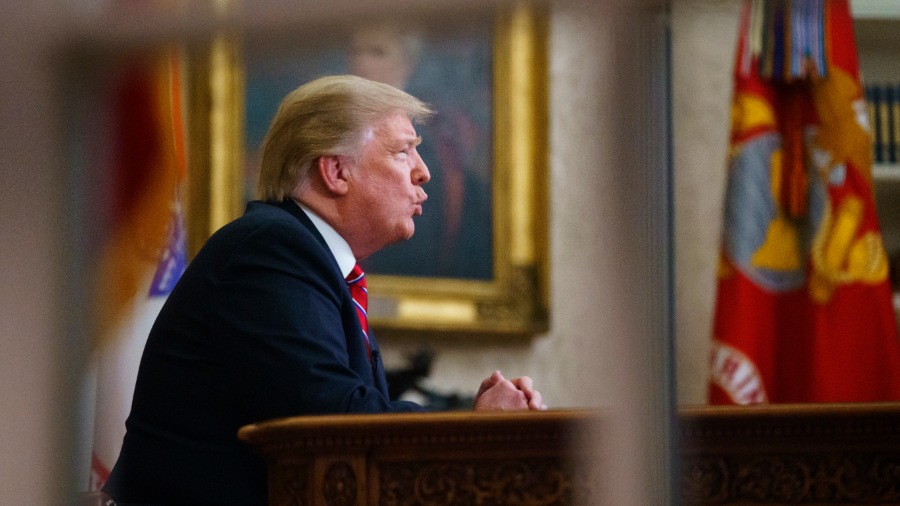 As seen from a window outside the Oval Office, President Donald Trump gives a prime-time address about border security Tuesday, Jan. 8, 2018, at the White House in Washington.

President Donald Trump made the case Tuesday night for the $5.7 billion he wants Congress to approve for a wall expanding the physical barrier along the southern border to stop the flow of illegal immigrants and drugs. The Daily Signal examined five of the president’s claims in his 10-minute speech from the Oval Office.

1. “All Americans are hurt by uncontrolled illegal migration. It strains public resources and drives down jobs and wages. Among those hardest hit are African-Americans and Hispanic Americans.”

“Black males are more likely to experience competition from illegal immigrants,” Kirsanow said in a 2017 interview with The Daily Signal.

“What happens is you eliminate the rungs on the ladder because a sizable number of black men don’t have access to entry-level jobs,” Kirsanow said. “It is not just the competition and the unemployment of blacks. It also depresses the wage levels.”

Also, a Civil Rights Commission study in 2010 found that illegal immigration had a high impact on black men in particular. The report noted:

Illegal immigration to the United States in recent decades has tended to depress both wages and employment rates for low-skilled American citizens, a disproportionate number of whom are black men. Expert economic opinions concerning the negative effects range from modest to significant. Those panelists that found modest effects overall nonetheless found significant effects in industry sectors such as meatpacking and construction.

George J. Borjas, a professor of economics and social policy at the Harvard Kennedy School, wrote for Politico in 2016 on the issue, saying:

Both low- and high-skilled natives are affected by the influx of immigrants. But because a disproportionate percentage of immigrants have few skills, it is low-skilled American workers, including many blacks and Hispanics, who have suffered most from this wage dip. The monetary loss is sizable. The typical high school dropout earns about $25,000 annually. According to census data, immigrants admitted in the past two decades lacking a high school diploma have increased the size of the low-skilled workforce by roughly 25 percent. As a result, the earnings of this particularly vulnerable group dropped by between $800 and $1,500 each year.

2. “Sen. Chuck Schumer — who you will be hearing from later tonight — has repeatedly supported a physical barrier in the past, along with many other Democrats. They changed their mind only after I was elected president.”

As Senate minority leader, Schumer, D-N.Y., is now the chamber’s top Democrat. In 2006, Schumer — along with other high-profile Democrats — voted for the Secure Fence Act.

The proposal specifically calls for a physical barrier along more than 700 miles of the southern border that had no fencing. The language of the Secure Fence Act says it:

So Schumer has voted for a physical barrier, although he technically could argue that he supported a “fence” rather than a “wall.”

Other Senate Democrats to support the proposal included Barack Obama of Illinois, Hillary Clinton of New York, and Joe Biden of Delaware. Among current senators, Dianne Feinstein, D-Calif., voted for the proposal.

Some Democrats were indeed consistently opposed to a physical barrier. For example, Sen. Richard Durbin, D-Ill., now the Democratic whip, voted against the 2006 bill.

But in the House, then-Minority Leader Nancy Pelosi, D-Calif., voted no on the Secure Fence Act, as did the No. 2 Democrat, Steny Hoyer of Maryland.

3. “Every week 300 of our citizens are killed by heroin alone, 90 percent of which floods across from our southern border.”

According to the Centers for Disease Control and Prevention, in 2017 “more than 15,000 people died of drug overdoses involving heroin in the United States.” That’s about 288 deaths per week.

“Mexico remains the primary source of heroin available in the United States, according to all available sources of intelligence, including law enforcement investigations and scientific data,” states a 2018 report from the Drug Enforcement Administration.

The report suggests that ports of entry, not unattended border stretches, are where most of the heroin is being smuggled.

“A small percentage of all heroin seized by CBP [Customs and Border Protection] along the land border was between ports of entry,” the report says, adding:

Mexican [Transnational Criminal Organizations] control the movement of heroin that enters the United States across the [southwest border], until it reaches its destination in cities all over the United States. The majority of the flow is through [privately owned vehicles] entering the United States at legal ports of entry, followed by tractor-trailers, where the heroin is co-mingled with legal goods. … Body carriers represent a smaller percentage of heroin movement across the [southwest border] and they typically smuggle amounts ranging from three to six pounds taped to their torso, or in shoes and backpacks.

4. “One in three women are sexually assaulted on the dangerous trek up through Mexico.”

A 2017 report from Doctors Without Borders surveying crossings into Mexico from the areas of El Salvador, Honduras, and Guatemala, which it calls the Northern Triangle of Central America, says that “nearly one-third of the women surveyed had been sexually abused during their journey.”

Increasingly, Central American women crossing through Mexico to the United States become victims of sexual assault. Some women choose to sell their bodies for safe passage, but others aren’t given a choice. Migrant shelter directors told Fusion 80 percent of Central American women who make the journey to the U.S. are raped in Mexico.

Trump’s arrest numbers are correct, according to U.S. Immigration and Customs Enforcement numbers compiled in 2017 and 2018.

The number of illegal immigrants arrested by ICE is the highest since 2014, according to a December report by the agency.

“The number of people with pending charges arrested by ICE was 48 percent higher in 2018 than in 2017, while arrests of those with criminal convictions dropped slightly,” Reuters reported.

According to The Washington Post, the report “shows that 145,262 of those deported were convicted criminals and that 22,796 had criminal charges pending against them.”

A total of 5,872 known or suspected gang members were arrested, according to the report, as well as 42 thought to be terrorists.

ICE reports break down the charges and convictions following the arrests.

Can Trump Issue an Emergency Declaration Directing the Military to Build the Wall?