What could explain the leftists' descent into irrational and immoral hysteria? 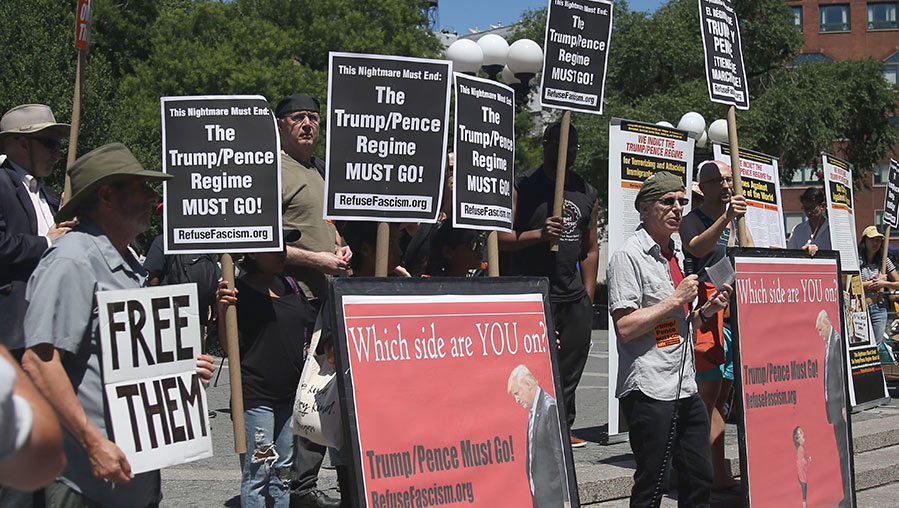 As I watch a great number of my fellow Americans and virtually all of the mainstream media descend further and further into irrational and immoral hysteria — regularly calling the president of the United States and all of his supporters Nazis, white supremacists and the like; harassing Republicans where they eat, shop and live; ending family ties and lifelong friendships with people who support the president; declaring their opposition to Trump and the Republican Party the “Resistance,” as if they were American reincarnations of the French who fought real Nazis in World War II; and so on — I ask myself: What is going on? How does one explain them?

Here are some answers:

Many Americans are naive, about life, about good and evil, and about America. They don’t realize how rare America is and how good they have it. This mass naivete was vividly expressed by the reaction of tens of thousands of mostly white middle-class Americans to then-candidate Barack Obama in 2008, when he was campaigning in Columbia, Missouri. Obama announced, “We are five days away from fundamentally transforming the United States of America.”

I frequently play the recording of Obama’s statement on my radio show not only to explain a basic difference between right and left — the left believes America needs to be fundamentally transformed, while the right thinks America needs to be incrementally improved — but also for people to hear the crowd’s reaction.

Very few contemporary American recordings are as depressing as the ecstatic and prolonged cheering the crowd gave that terrible promise from Obama. I believe it is not an exaggeration to say that had he announced a cure for cancer, the cheering could not have been louder and probably would not have been longer.

Why would middle-class Americans — people who have more affluence, more opportunity, better health, better health care and more liberty than almost anyone alive in the world today, and certainly than anyone who ever lived — thunderously applaud a call to fundamentally transform their decent country?

One answer — one of many, as we will see — is naivete.

Earlier this year, I had a debate/dialogue with two left-wing students at the University of California, Berkeley. I thought debating left-wing students, rather than giving a speech, would accomplish two objectives: deter left-wing protesters from disrupting my appearance and enable young people at Berkeley and around the world (via the internet) to hear differences between right and left clearly spelled out. Both aims were achieved.

My final question to them was “Do you believe people are basically good?” Without a moment’s pause, both students said yes.

I told them they think that way because they live in such a decent country. It is easy to remain naive in America, where most are insulated from the suffering inflicted on so much of humanity in deeply corrupt, poverty-stricken and war-torn societies. Nevertheless, given the way humans have treated one another throughout history, and only two generations after Auschwitz, only the naive can believe people are basically good. And since no Western religion (i.e., any religion based on the Bible) has ever posited that people are basically good, this naivete is abetted by secularism, which allows for the pursuit of knowledge but destroys wisdom.

Only the naive — or willfully ignorant — could equate support for Donald Trump with Nazism. Are most Israeli Jews Nazis? Are a third of America’s Jews Nazis? (Many on the left would probably answer yes, which gives you an idea how mean and sick many on the left are.)

Boredom, at least in our time, is the most overlooked source of evil. In the past, before people went to college and abandoned religion — the two greatest reasons there is so much moral idiocy in our time — people knew how dangerous boredom was. “Idle hands are the devil’s workshop” was a commonly used aphorism that wouldn’t even make sense to most young people today.

By bored I am not referring to a lack of things to do. There is more opportunity to do and experience things today than ever before. By bored I mean a deep boredom of the soul, what the French call “ennui.” This is the boredom that emanates from lack of purpose and a yearning for excitement.

The combination of affluence and secularism produces boredom as surely as the combination of hydrogen and oxygen produces water. Without affluence, people have a built-in purpose: obtaining food and shelter, supporting oneself and one’s family, etc. And religion, with or without affluence, likewise has always provided people with meaning. Without religion, therefore, purpose is often lost. Add to that the number of people who are not married and do not have children (also a result of the combination of affluence and secularism) and you remove another universal source of meaning.

A disproportionate percentage of those on the left (not traditional liberals) do not lack for material needs, have no religion and are single and/or childless. Those left-wing screamers you see in restaurants, the left-wing mobs on campus, the left-wing “antifa” thugs and the left-wing Black Lives Matter demonstrators who close down bridges and highways do not generally consist of married people with children who attended church the previous Sunday.

These people find this lack of purpose assuaged by leftism. It provides meaning and excitement, a very heady combination.

These are a few explanations. In Part II I will offer others.

Dennis Prager’s latest book, The Ten Commandments: Still the Best Moral Code, was published by Regnery. He is a nationally syndicated radio show host and creator of PragerUniversity.com.