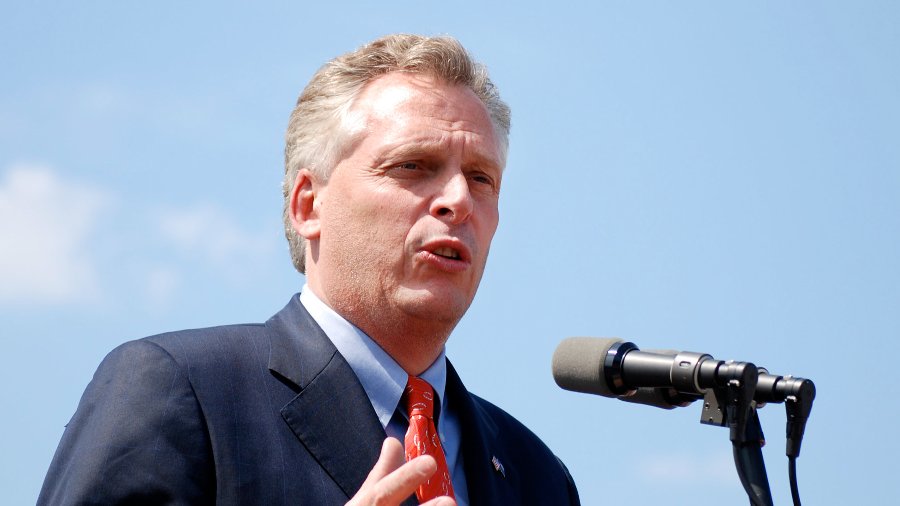 Former Virginia Gov. Terry McAuliffe generated reactions across the country after making a controversial statement about parental involvement in education during the Sept. 28 gubernatorial debate with Republican nominee Glenn Youngkin.

“I’m not gonna let parents come into schools and actually take books out and make their own decisions,” said McAuliffe, the Democratic nominee who previously served a term as governor from 2014-2018. He went on to boast of his 2016 veto of legislation that would have allowed parents to block sexually explicit books.

Terry McAuliffe: "I don't think parents should be telling schools what they should teach." pic.twitter.com/7S15pTv1gY

Virginia’s Fairfax County Public Schools recently were forced to pull two books, “Gender Queer” and “Lawn Boy,” after explicit material was revealed by Stacy Langdon, a mother, during a school board meeting on Sept. 23.

Neighboring Loudoun County has been the flashpoint for debates over the use of critical race theory (CRT) in schools.

“Terry McAuliffe believes that parents should have no say in their children’s education so that he and his radical special interest allies can keep pushing their political agenda into classrooms. As governor, McAuliffe shut down parents who wanted a better education and more choices for their children, and his disastrous policies and lower standards have led to plummeting SOL scores and more students being left behind” Youngkin campaign spokesman Christian Martinez said in a statement provided to the Daily Caller News Foundation. “Glenn Youngkin will get politics out of our schools and be a champion for parents and students.”

Are you a parent who wants to have a say in your child's education?

Too bad. Terry McAuliffe says you have to sit down and shut up. pic.twitter.com/YOja0FWxVJ

“The public schools in Virginia do not exist to raise our children, they exist to teach them math, science, reading, writing, and history. They definitely shouldn’t be providing pornographic material, encouraging gender confusion, and teaching children that they are either oppressed or oppressors,” Ian Prior, a Loudoun County parent and executive director of Fight for Schools, told the DCNF.

“Well, it’s unfortunate that one of our governor candidates, McAuliffe, feels parents do not have a right to their own children in the schools. We do not co-parent with the government, we do not co-parent with teachers or with the school board. We are the parents and ultimately, we have the final decision over our children,” Patti Hidalgo Menders, the president of the Loudoun County Republican Women’s Club and a parent with children in Loudoun County Public Schools, told the DCNF.

“We have every right to know the materials they are reading in the schools. That’s our right as a parent,” she added.

“The intentional efforts made by certain elected officials starting from the school board all the way up to a gubernatorial candidate like Terry McAuliffe to silence and shut out parents from their children’s education and insert themselves as the government as the primary educator instead of the parents being the primary educator of the children is appalling.” Elizabeth Schultz, a former member of the Fairfax County school board who has a child in middle school said.

“Every parent, regardless of their political affiliation, regardless what age their students are, should be repelled by the notion that the government alone is in charge of what your children learn,” she added.

Across the country, parents have been speaking out about the use of critical race theory in classes. In Missouri, an online training seminar became controversial when the trainer, Dr. LaGarrett King of the University of Missouri, coached teachers on how to sneak teaching social justice past “Trump country” parents.

In Loudoun County, several school board members were part of a secret Facebook group that sought to publically expose parents who opposed the use of critical race theory in school curricula. The revelation triggered a recall campaign targeting six of the members. Loudoun County Public Schools denied using critical race theory, but evidence provided by parents contradicted that denial.

“Terry McAuliffe should learn Virginia law. #VAgov § 1-240.1. Rights of parents. A parent has a fundamental right to make decisions concerning the upbringing, education, and care of the parent’s child,” McAuliffe’s opponent, Glenn Youngkin, posted on Twitter.

§ 1-240.1. Rights of parents.
A parent has a fundamental right to make decisions concerning the upbringing, education, and care of the parent's child. https://t.co/0EDigYoCze pic.twitter.com/shFwGDg8Lf

Radio talk show host Hugh Hewitt vowed on Twitter that he was playing McAuliffe’s comment “coming into every break” during his program.

“Last night on the gubernatorial debate stage Terry McAuliffe stood before you and said ‘I don’t think parents should be telling schools what they should teach’. The choice is CLEAR. Vote @GlennYoungkin,” Aliscia Andrews, a Loudoun County parent and former Republican candidate for Congress, tweeted.

Julie Perry, the Republican nominee for the 86th House District for the Virginia House of Delegates, noted McAuliffe’s endorsement of her opponent on Twitter, and after quoting his remarks, asked if her opponent would “distance herself from the top of her ticket.”

Steven Law, whose Twitter profile describes him as CEO of the Senate Leadership Fund, noted in a tweet that the issue with McAuliffe’s statement went beyond what he said.

Watch it again. It’s not just what he said, but the tone of exasperated disdain for parents wanting a say in their kids’ school. It’s like McAuliffe is oblivious to the last year of union-dictated school shutdowns, crappy online classes, student depression and CRT indoctrination. https://t.co/Miz6IQThgu