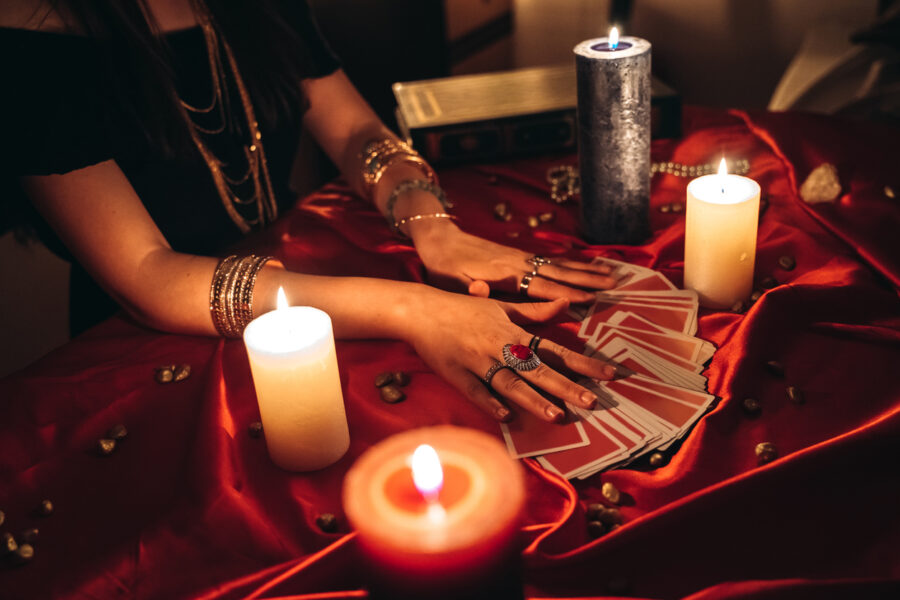 An ex-psychic whose encounter with tarot card reading as a child led her on a journey into New-Age practices and the occult is offering a dire warning about the “deception” and dangers she encountered.

Jenn Nizza spent years doing readings and communicating with what she believed were the dead loved ones of her clients — until she had an encounter with Jesus that changed everything.

READ ALSO: ‘The Devil Doesn’t Own the Airwaves’: Kathie Lee Gifford Details Finding Christ and Why She Plans to Tell Biblical Stories the Rest of Her Life

Nizza recently told “The Playing With Fire Podcast” about how her journey into the occult unfolded at a “very young age” when the “door was open” inside her home. Despite being culturally Catholic, she said paranormal discussions were a regular occurrence with her family.

“In my home, it was very acceptable to talk about paranormal activity, what people commonly call ghosts, which, of course, were demons,” she said. “I had my very first tarot card reading [at the age of 13].”

The Start of Her Obsession

Around the same time, Nizza said she had already begun experiencing what she now believes was demonic oppression. She started having dreams about events that would essentially come true.

Rather than flee from these practices and experiences, Nizza became enamored and dove in even deeper after her first tarot reading.

“That’s when I really walked through the door, because I was so intrigued by it, and I started seeking it out. … I went full-in,” she said. “It was a rabbit hole of destruction. … I had my own tarot cards. I kept going for readings; I became addicted to it.”

Listen to Nizza break down her journey from darkness into light:

Nizza found herself exploring numerology (the occultic practice of exploring the relation of numbers to events) and astrology (divination that involves celestial objects), among other techniques.

At the same time, she faced struggles with depression, as well as an eating disorder.

Still, Nizza forged on and started doing readings for friends, family, and eventually other clients. She said she eventually believed “every single lie the New Age” told her.

She Believed She Was Helping

Nizza said she really believed she was helping people through her “abilities” and made an important proclamation about many of the psychics and mediums she has known. While many Christians might assume these individuals have diabolical plans, most believe they’re assisting others.

“This is part of the destruction that happens,” she said. “I think it’s the first line of deception … I’ve always been a compassionate person and these psychic mediums, for the most part, are nice, compassionate people that really do want to help other people.”

But people engaging in such things, she said, have become spiritually vulnerable, believing the evil they’ve allowed in is somehow a form of good.

“Satan masquerades as an angel of light,” Nizza said. “You think that you’re a servant of righteousness.”

READ ALSO: ‘It Just…Blew My Mind’: Singer Colton Dixon on What Hollywood Gets Wrong About Noah, a Real-Life Miracle, and Having Trust in Storms

A Warning About Demons

Rather than receiving information from sources of good, she said demons, whom she described as fallen angels, are “giving psychics information.”

“[Demons] hate us, and they hate God, and they’re on a mission to get us away from the Lord,” Nizza said, adding they predict what will unfold but can’t know for sure.

As a former medium, she believed she was communicating with the dead, but now acknowledges the spirits she once channeled were demonic.

“There is no good spirit talking to a psychic. … They masquerade as your deceased loved ones,” Nizza said. “When it seemed like mom or dad or grandma, and you’re crying with your client … that seems good and comfortable.”

But the ex-psychic said mediums are actually convening with evil.

Finding Jesus in the Mess

As for Nizza’s own journey away from the occult, she said she eventually hit her absolute lowest point and found herself calling out to Christ.

“When I was 36, I first cried out to Jesus,” she said. “I was at the lowest of the low, the lowest moments of my life — one of the darkest moments. … My soul, my spirit, knew to cry out to Jesus. I needed Him.”

By the time she turned 37, her Christian journey had finally begun.

Reflecting on all that unfolded, Nizza — who believes she was oppressed throughout her life but not possessed — found it fascinating she turned to Christ rather than the spirits she spent years adoring.

“I didn’t cry out to a deceased person, a spirit guide, an angel, anybody who I thought I was communicating with all those years,” she said. “I cried out to Jesus Christ and He really did show up.”

Nizza continued, “The Gospel is what saves.”

She also offered a warning to anyone considering or in the midst of pondering occultic and New-Age practices: beware of the dangers.

“If you go down the wrong road — it just takes one tarot card reader on TikTok, one person in the new age, one ‘love and lighter’ to tell you that you are gifted,” she said. “And you are going to go down the rabbit hole of destruction.”

Listen to Nizza’s entire story from darkness into light on “The Playing With Fire Podcast.”

This story originally appeared on Faithwire.com. Reprinted with permission.